The refugee protection regime needs reform, but this requires new international approaches that go beyond the Refugee Convention.

James Hathaway is right—the dream of those who drafted the 1951 Refugee Convention has not been realised. While millions of refugees do lead independent lives, millions more do not, being entitled only to an undignified life in camps supported by the international community.

I lament this situation as much as Hathaway does, and like him I oppose those that blame this unacceptable state of affairs on the Refugee Convention. Where we part company is when he argues that the solution lies in implementing the Convention as is. The Refugee Convention is not wrong—but its scope is limited. Implementing it fully is necessary but insufficient to fix the problems that most seriously undermine the refugee regime. Namely, there is an unfair distribution of state responsibilities and an imbalance between a binding prohibition on returning refugees, as well as a loose system of international cooperation, which means some states must host more refugees than others.

Outgoing High Commissioner for Refugees, Antonio Guterres, said at the end of his tenure in 2015 that, “…if there is one Protocol that is yet to be drafted to complement the 1951 Convention, it is one on international solidarity and burden sharing.” Equitable burden-sharing is not required by the Refugee Convention, whether in its financial or territorial modality. The Convention imposes no obligation to admit refugees, unless they show up at your border and denying them entry would jeopardise their lives or liberty. By and large, the positive (integration-oriented) provisions of the Convention take admission for granted. The Convention answers the question, “who is a refugee?” but it does not address the thornier question: “whose refugee?” 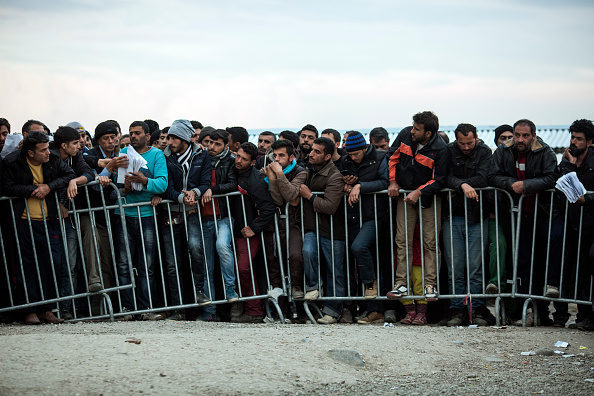 Migrants and refugees are stranded in Greece following border closures and tightened security in Macedonia and other Balkan States.

That being said, I sympathise with Hathaway’s vision of making the treaty work. But there is a political downside to grounding the entire responsibility-sharing argument on the Refugee Convention as it stands.  Many refugee-hosting states are not parties to the treaty, and these are unlikely to join the club unless it promises a fairer deal than is currently the case.

For all these reasons, the search for a new model must be an effort that includes more than simply implementing the Refugee Convention.  The core of this model should be common but differentiated responsibility, as suggested by Hathaway, and I would offer comments on three key dimensions of his bold proposal.

The world needs a refugee admission paradigm that is based on the customary duty to rescue people in distress.

First, I would take further the proposition that “there need be no necessary connection between the place where a refugee arrives and the state in which protection …occur[s]”. Indeed, we should re-think the entire territorial dimension of refugee protection. Where refugees “happen” is almost invariably a matter of chance. Just because they’re closer to the refugees’ country of origin, citizens in host states are not necessarily more compassionate.  The world needs a refugee admission paradigm that is based on neither proximity nor affinity, but rather on the customary duty to rescue people in distress, wherever they are. International cooperation in responding to disaster is widely regarded as obligatory, allowing for the development of highly effective intervention models.  The language of disaster and rescue thus offers a range of concepts and tools, which can be operationalized in refugee emergencies: priority on saving lives, rapid assessment of needs, evacuation, shelter, “delivery to a place of safety”.  It also has broader implications for how we conceive rescuing refugees. Tomorrow’s refugees may be defined not by their ability to cross an international border, but by the ability (and will) of the international community to reach out to them in the exercise of its duty to rescue.

Second, as Hathaway proposes, we must establish “common international refugee status determination system and group prima facie assessment”. This is necessary not only in order to reduce processing costs, though this is an important consideration.  No collective responsibility system can work in the absence of a consensus on the refugee character of the flow. Since Fridtjof Nansen was High Commissioner for Refugees in the 1920s, the role of that office has included forging such a consensus whenever a new crisis looms. This common understanding of who needs protection should not be constrained by the relatively narrow definition of a  “refugee” in the 1951 Convention. Importantly, it must be accompanied by the negotiation of a situation-specific and comprehensive plan of action (as was done for the Vietnamese in the 1980s). Such a plan would outline the responsibilities of states both near and far. There can be no single global solution for the global refugee crisis. I believe, however, that the group approach to both refugee status recognition and responsibility-sharing, on a situation-by-situation basis, has potential which has not been tapped with sufficient determination to date.

Third, the suggestions noted above, and indeed much of what Hathaway himself is recommending, require some form of international management of refugee crises, but only insofar as “international” means “inter-state”. Any notion of supra-national administration, whereby an international organization would substitute its own authority, is a dangerous delusion.  If state authority were delegated in this way, it is likely to conceal a deliberate abdication of responsibility. That is, states will blame their own failure to cooperate on the ultimate scapegoat—UNHCR. Camps are the standard response to refugee flows because they permit this responsibility-evading function: a UNHCR-administered camp is UNHCR’s problem.

The “shift away from national, and towards international, administration of refugee protection” suggested by Hathaway means states would delegate their protection responsibilities to UNHCR. This must be avoided. UNHCR cannot and should not allocate funds and refugees. Yet, it can do more than just administer quotas once these are set. As suggested above, UNHCR should be more forthright as the mediator pushing for equitable responsibility-sharing and durable solutions. In this role it should also be more attentive to the concerns of the less well-resourced states within the regime.  To give only one example, poorer, frontline states must be tired of hearing that third-country resettlement is the least desirable solution, which must be used “strategically”. They understand this to mean that a few refugees will be resettled abroad, but the bulk of the refugee caseload must integrate locally.

Under the rescue paradigm that I am advocating, resettlement would be called evacuation, and self-designated “resettlement countries” would no longer be able to set the rules only among themselves, with UNHCR in tow.

Jean Francois Durieux worked for over 30 years with UNHCR on all continents and at the organization's headquarters in Geneva. Since retiring, he has been lecturing in universities and conducting refugee protection training courses. He currently directs the forced migration programme of the International Institute of Humanitarian Law in San Remo, Italy.