Building a culture of giving in Latin America takes creativity, persistence and a willingness to invest in people.

The philanthropy that supports civil society’s engagement with social change is growing at a global level, and “success stories” are no longer only occurring in countries with the most organized philanthropic traditions. Even though levels of giving in Latin American countries do not necessarily stand out globally, a philanthropic culture has been developing steadily over the past several years. The number of individual donors in the region is growing particularly quickly, climbing a great deal higher than strategies used to mobilize resources with businesses or state institutions.

In the World Giving Index (2014), which allocates a score based on three measures of giving behavior (the percentage of people who in a typical month donate money to charity, volunteer their time, and help a stranger) the most generous countries in the region are in the Caribbean: Trinidad and Tobago share tenth place in the global ranking, while Jamaica is ranked 20th globally. Following them are Central Americans such as Guatemala (25th place, globally), the Dominican Republic (27th) and Costa Rica (34th). Although Argentina (77th), Brazil (90th) and Mexico (85th) are not in the top ranks, these countries’ large populations make their total philanthropic contributions numerically superior to others in the region.

In Argentina, according to the World Giving Index 2015, 25% of the sample population donated money or time to help a stranger in the last month. Indeed, international organizations with strategies for recruiting individual donors in Latin America, such as UNICEF, and international NGOs such as Greenpeace, Doctors Without Borders or the Red Cross, all have their largest individual donor base in Argentina, even more than in Mexico or Brazil. Though 25% of the population may seem small when compared to the 40% in Chile or the 46% in Guatemala, this culture of donating is only just beginning to develop and grow, largely due to the creativity and persistence of NGO campaigning efforts.

“Face to Face” marketing, for example, is one of our organization’s most effective fundraising methods. Through direct dialogue—where organization representatives, identified by uniform, credentials and photo ID, speak with people on the streets—we tell people about our organization and what it does, and then ask them to support the cause by making a monthly donation. Through these efforts, FMS gained 91 members in only three events in 2014-2015,with an average monthly contribution of $73.35 Argentine pesos, or $9 USD (average rate in 2014-2015). 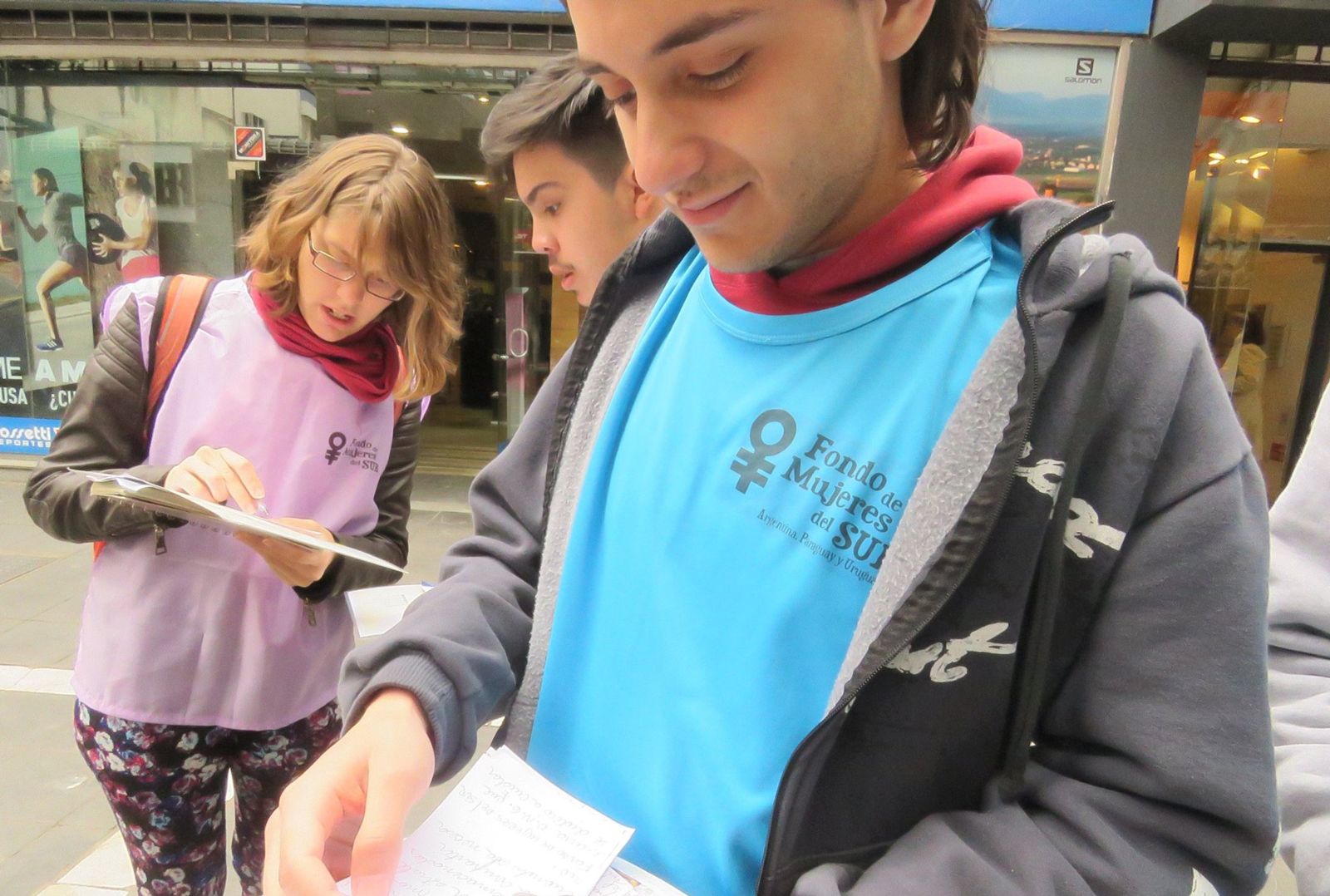 “Face to face” marketing (pictured above) is one of the most effective fundraising methods utilized by the NGO, Fondo de Mujeres del Sur.

Through an agreement with PROA Consulting, an Argentinian organization specializing in resource development and NGO sustainability, FMS carried out three direct dialogue campaigns in the past year, projecting a return on these investments within the next four months.

Through these campaigns, we learned several valuable lessons:

1. The value of communication

When confronted with the immensity of existing social problems, the average person does not know how to get involved in philanthropic causes.

When confronted with the immensity of existing social problems, the average person does not know how to get involved in philanthropic causes. Often they think that an individual contribution is so negligible that it will not make a difference, so we use simple messages to inspire others to help. For example: “With only three pesos a day, a group of ten young women from a marginalized neighborhood in Jujuy can support and assist women victims of gender violence”.

Our most effective method frames our group as an organization of women who support other organizations of women with limited access to resources, showing images of the groups with which we work. One challenge we have is that many people in Argentina already think that women are equal, because we have a female president. Also, given that Córdoba (where we are based) has a fairly conservative climate, and Catholicism is strong in the region, we must tailor our discussion of women’s rights accordingly without diluting the message.

2. The importance of investing in administrative systems

During our second (March 2015) and third campaigns (August-September 2015) we changed our banking infrastructure to allow for credit and debit donations. We have also managed to improve the return on investment timeline from campaign to campaign (see Figure 1 below). For the third campaign, we agreed upon another method of investment recovery, which allows us to make multiple smaller payments and projects an even quicker return on investment. The average attrition rate (loss of members per month) has been low and close to expected, showing that our donor loyalty strategy is working properly even as we improve it.

Figure 1. Average Monthly Amount of Money Raised in Each Campaign

This last campaign taught us the importance of training and relying on our own activists, and we are now looking at personally running our next campaigns in Cordoba City, with help from our consultants, PROA. We aim to become increasingly autonomous, in order to be able to run our own campaign in Córdoba by 2016; meanwhile, PROA will launch FMS campaigns in Buenos Aires and Mendoza. By investing in our own people, we not only lower cost of investment, but we also increase our capability to establish a solid donor base, thus ensuring the sustainability of our core work.

4. The need for an effective donor loyalty strategy

In keeping with global trends, our donors are mostly women (55%), while 54% are aged 20-30. Those in the 30-40 age bracket represent another 20%, meaning that three-quarters of our donors are under 50. These demographics have clear implications for our messaging.

Making modest investments, while remaining meticulous in our thinking, has opened up a world of possibilities. The key is not only obtaining more donors, but also in keeping members motivated and informed so that we build strong, stable connections.

The women’s solidarity movement seems to be gaining momentum in every Latin American country. Today more than ever we must maintain mechanisms that transform good will into action, creating sustainable, participatory and inclusive development. In this sense, we will continue to think about new strategies to get citizens to donate to causes that have been overshadowed in the sub-region, trusting in the women who are already leading their own causes. Many people find our work as women’s rights advocates difficult to understand, because we don’t engage in “normal” NGO activities, but we make these activities possible by supporting the groups that are creating them. In the future, we will address this lack of understanding head on, while increasing our visibility in Argentina, Paraguay and Uruguay. The immediate goal is to gain support in order to make a bigger investment in 2016—we plan to expand in more cities and launch one new campaign per month. As we expand both geographically and programmatically, we will begin to see even more of the changes that we want to see.