To effectively promote lasting peace, responses to the violence in Syria must account for incompatible—and even irreconcilable—demands for justice. 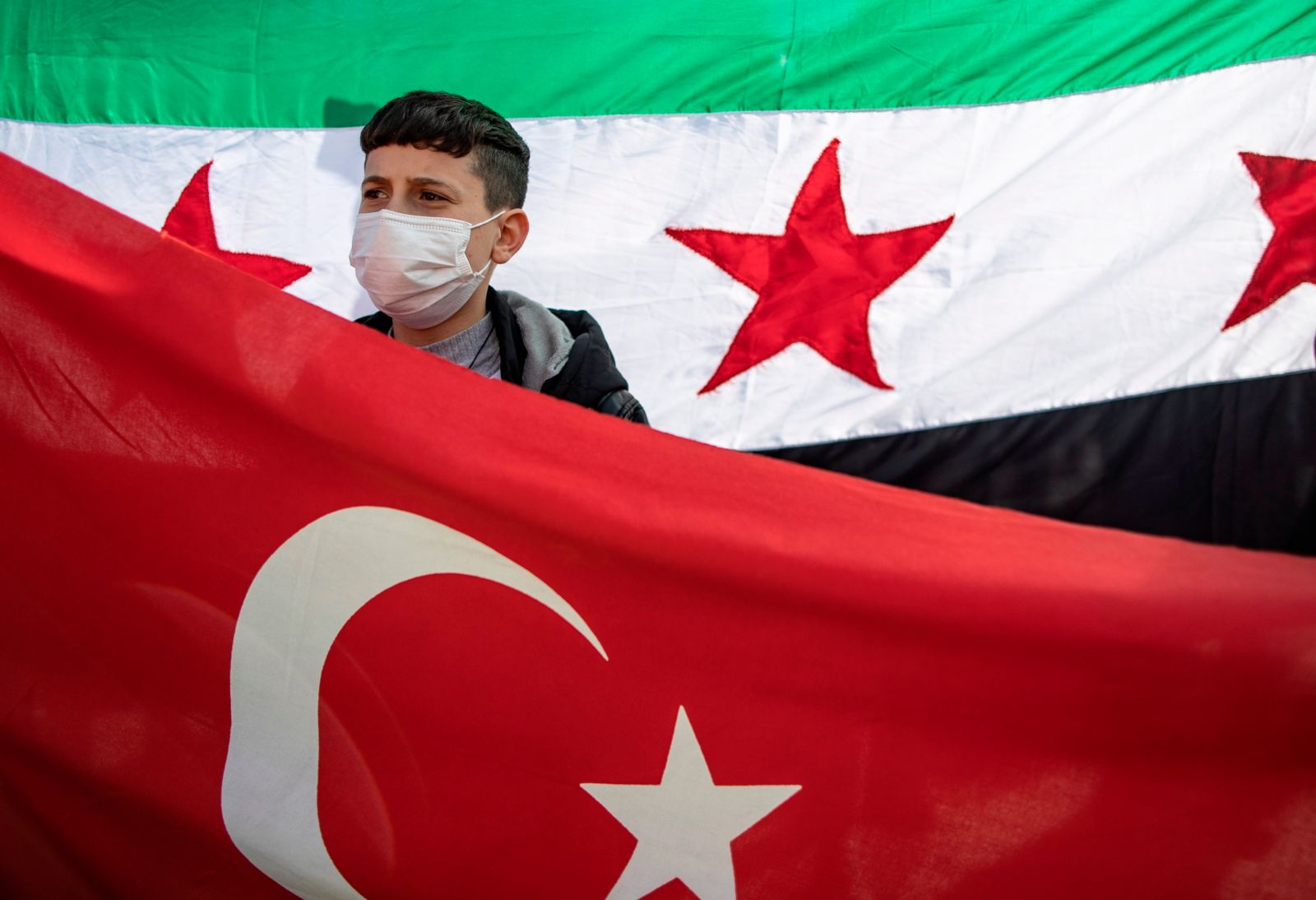 A Syrian child hold a Turkish flag in front of pre-Baath Syrian Flag during a rally for the 10th anniversary of the Syrian war in Istanbul, Turkey on 13 March 2021. More than 3.6 million Syrians live in Turkey as a result of the decade-long conflict in their home country. EFE/EPA/ERDEM SAHIN

With over 400,000 dead, millions displaced, and countless others victimized by gross human rights violations, Syrians face a daunting question: What can justice look like for their country after a decade of brutal conflict?

I found fierce disagreement not only between pro-regime and anti-regime Syrians but also within these conflicting sides over how to best pursue justice. This finding is an early warning that policymakers and practitioners of transitional justice should not assume that “local” consultations will result in clear consensus or straightforward policy prescriptions. To effectively promote lasting peace, responses to the violence in Syria must account for incompatible—and even irreconcilable—demands for justice.

Scholars and practitioners have increasingly sought to center victims and survivors in designing and implementing localized transitional justice processes to reckon with the legacies of mass human rights abuses. While there is no single definition for “local,” such processes are generally created by and for those most affected by violence in order to reflect their context-specific needs, interests, and priorities. Bottom-up justice efforts recognize the central role that all members of society play in conflict transformation and demand that political elites engage with public opinion to craft effective policies.

To gauge what average people want out of transitional justice processes, researchers typically present respondents among conflict-affected populations with a menu of justice mechanisms—like trials, truth commissions, amnesties, reparations, and community dialogues—and ask them to indicate their preferences. Human rights champions assume that these “local” consultations can help policymakers and practitioners—who may be positioned at the national or international levels—to design justice interventions tailored to the preferences of victims and survivors.

What can justice look like for their country after a decade of brutal conflict?

But how useful are these consultations when the “local” population fundamentally disagrees about the nature, form, and goals of a transitional justice process? This scenario is playing out in Syria.

Drawing from original interviews I conducted in 2018, along with a 2013 dataset from the Syria Justice and Accountability Center (a U.S.-based nonprofit dedicated to documenting human rights violations in Syria), I analyzed the justice preferences of 44 Syrians living in and outside of the country. Participants were diverse in age, gender, religious sect, region of origin, and political leaning. Even among this small sample, Syrians expressed starkly diverging perspectives on justice.

Disagreements surrounded nearly every question: Which mechanisms should be employed? Who should be in charge? Who should be held accountable? What kind of punishments should there be? However, deeper analysis of participants’ answers revealed three dominant perspectives, hinging on different views of the conflict and how to pursue justice. Keep in mind, these perspectives were exhibited by both pro-regime and anti-regime Syrians as they described members of the opposing side:

First, there were the unrepentant extremists. These individuals spoke with rhetoric that dehumanized and degraded their enemies. They tended to view the conflict as existential—either win or die. In addition to refusing peace without unilateral victory, unrepentant extremists overwhelmingly favored retributive justice mechanisms. Many wanted to put their enemies on trial and recommended the death penalty for convicted perpetrators. They also vehemently denied any wrongdoing by their own side, which they saw as truly patriotic.

Then, there were the dedicated partisans. Members of this group demonstrated less polarizing views of the conflict than the previous group, while still definitively claiming loyalty to one side. Dedicated partisans were firmly committed to securing their own side’s interests and thought they were better than the “other.” However, they were more willing to negotiate and reconcile with their adversaries. They tended to favor trials for crimes committed by all parties and promoted lighter punishments. Many provided nuanced—though politically self-serving—perspectives of the justice process.

Having an adequate baseline of “local” preferences can help anticipate what degree of support or resistance various justice mechanisms would receive on the ground.

Finally, there were the war-weary citizens, who identified more with being Syrian than with belonging to any side in the conflict. These individuals claimed to be caught in-between the warring parties, while bearing much of the suffering themselves. War-weary citizens favored holding all sides accountable, though they were the group most open to restorative justice mechanisms, like truth commissions and even amnesties. Their primary concern was ending the violence, and they believed justice efforts should be designed to that end.

Imagine—for a moment—that this exploratory study was repeated in a representative, nationwide survey of Syrians’ justice preferences today. If 50% of respondents emerged as  unrepentant extremists, 30% as dedicated partisans, and 20% as war-weary citizens, what policy would you recommend? There is no way to please everyone, and numerous case studies beyond Syria have also found disagreement over justice preferences. Consequently, human rights champions should not assume that consultations will point to universally favorable policy interventions, even at the “local” level. In the end, policymakers and practitioners must prioritize whose preferences get implemented, when, and how.

But that doesn’t mean that recording individuals’ justice preferences is completely useless. Instead, such evaluations can be a sort of temperature check to measure where public attitudes are at a given point in time. Having an adequate baseline of “local” preferences can help anticipate what degree of support or resistance various justice mechanisms would receive on the ground, which—though falling short of the ideal participatory design process—is still better than ignoring “local” voices entirely. Further, human rights champions should consider embracing process pluralism in transitional justice to attempt to address competing demands. The Syrian conflict has left no one untouched by its devastation, meaning that policymakers must seek to understand the preferences of all Syrians if they hope to encourage individuals to actively participate in justice efforts.

For their part, researchers should continue to go beyond gauging who wants what when it comes to transitional justice preferences by investigating why. What social, political, and/or psychological forces shape these diverging opinions? Some promising research has emerged on the determinants of individuals’ transitional justice preferences—for example, in Burundi, Spain, and Bosnia—but much more is needed. Building this knowledge base can help policymakers and practitioners better interpret and put to good use the results of “local” consultations.

“Local” justice processes designed from the bottom-up may promise to meet the needs of victims and survivors, but they are not a simple solution. Assuming that “local” processes—by virtue of being “local”—can circumvent the trade-offs inherent in negotiating any transitional justice process severely underestimates the complexity of individuals’ perspectives. Human rights champions should proceed with caution, avoiding overly idealistic expectations of what going “local” can achieve. In the Syrian case especially, approach disagreement with humility and brace for a contentious process.

Jamie D. Wise studies Genocide and Mass Atrocity Prevention at the Jimmy and Rosalynn Carter School for Peace and Conflict Resolution at George Mason University. Her research focuses on transitional justice after mass atrocities in Rwanda, Cambodia, and Syria.