The first line of defense: grassroots activists and protection in Kenya

Research shows that protection strategies of victims, survivors, and activists are embedded in everyday relationships. 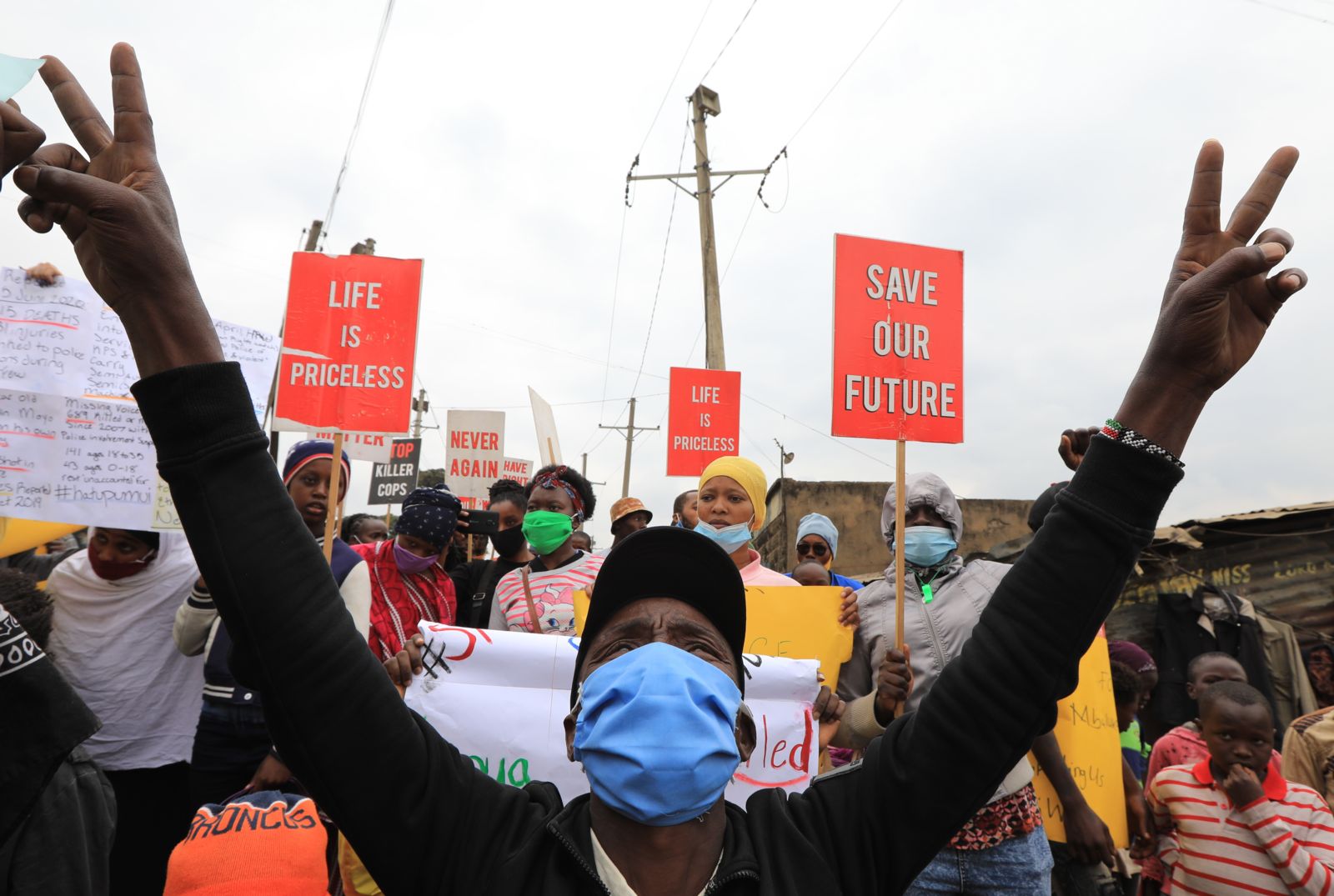 Residents of Mathare slum hold placards and shout slogans during a protest against police brutality and killings that have been witnessed during security operations recently and in the past few years, in the streets of the Mathare slums in Nairobi, Kenya, in June 2020. EFE/EPA/DANIEL IRUNGU

On November 25, 2020, four Kenyan social justice activists were arrested on their way back from bailing out a fellow comrade who had been detained on the charge of stealing a phone. This activist, Max, had received a phone call requesting him to leave a human rights meeting in Mathare, Nairobi, a poor urban settlement, to see someone just outside the building. On exiting, he was accused of possessing a stolen phone and taken to a Directorate of Criminal Investigations (DCI) office in the center of the city, instead of to any of the five police stations within a three-kilometer radius of this community. The sheer number and proximity of these police stations are of course in themselves a testament to the militarization of low-income neighborhoods.

A whole string of tactics were then taken up by his fellow social justice activists to get him free: a rapid response network organized at the grassroots level tracked him; they accompanied him to the police station, made calls and sent WhatsApp alerts, worked to get him a lawyer, and, simultaneously, presented a determined physical presence just outside the DCI office where he was detained.

Max was released from his illegal detention after about two hours. This time he was lucky, as the pressure seemed to have paid off. Others, without such relative means of support, time investment, and dedication from fellow community members, face a worse fate.

On the way back home, though, Max and three other activists were arrested after they intervened when seeing police officers from Kamukunji Police Station extort pedestrians for supposedly not wearing masks or not wearing them “properly.” Despite protests from their comrades, Max and three of those who had mobilized around his release were detained and charged with trying to commit a felony, resisting arrest, and causing a disturbance. They spent two nights in a jail cell, before the further efforts of grassroots activists and supportive individuals and NGOs managed to free them.

This is but one incident, within a plethora of similar incidents, that take place every day in Kenya, and which illustrate the challenges of protection work carried out by grassroots activists.

The protection of survivors of torture and their communities raises particularly acute challenges.

Protection work is central to human rights, but its meanings and implications are often taken for granted. On the one hand, protection is often subsumed within the protection of particular human rights—such as freedom from torture or freedom of expression—or, on the other hand, protection is seen as referring to the important, but rather amorphous concept of human dignity. What work that has been done in the academic and human rights worlds has largely focused on the protection of human rights defenders. Lost within these discussions can be a complex picture of intersecting violence, such as torture, forced disappearances, and extra-judicial killings, as well as harassment and corruption, and, equally important, the diverse ways in which many people facing violence actually seek to make themselves safe.

The protection of survivors of torture and their communities raises particularly acute challenges. And this is even more of an issue amongst people living in poor spaces who are also subjected to widespread forms of police violence, including torture. Formal protection mechanisms for survivors of torture are often inappropriate or inaccessible to all but a small minority—and often oriented towards distant and rare forms of criminal prosecution or civil redress. All too often, the public institutions supposed to provide protection are also the immediate source of the abuse. Furthermore, human rights organizations are either too distant or too stretched to provide much help when it is needed. As a result, it is often left to people on the ground to try and find a way to provide a measure of protection from human rights abuses—for themselves and their neighbors.

Trying to get at its situated complexities, we conducted research in Nairobi on protection oriented around these key questions: What formal protection mechanisms are available to survivors of torture and ill-treatment? What are the practical experiences of human rights organisations and survivors of torture and ill-treatment from poor communities in accessing these protection mechanisms? Finally, what are the different ways in which people from such communities seek to provide a measure of protection for themselves, and which gaps in protection do they face?

As illustrated by Max’s case, poor urban communities overwhelmingly rely on local tactics and relationships to ensure the protection of individuals and community members, even if they often do end up reporting cases to relevant authorities and supportive individuals and organizations. Second, and glaringly evident, interlocutors pointed out the many gaps in protection despite their best efforts, and the reality that one method will not work all the time or for everyone. Some of these gaps were in terms of actual services, such as the lack of safe houses or shelter for victims of gender-based violence, or persons in need of witness protection. But another gap is the inability to predict and/or ensure that government actors will act in a constitutional or consistent manner.

What this experience also illustrates is the importance of what interlocutors called “luck” in the face of an often arbitrary state. This could include narrowly avoiding the police by choosing to walk a different route, or meeting, by chance, a “friendlier” police officer. Max’s and others’ experiences also suggest how individuals and groups rely on community “loudmouths” who “know their rights,” and can help mediate encounters with police officers and other state officials—even if their safety is not always guaranteed. These actors are seldom lawyers, human rights professionals, or even those with any formal status at all. Rather, they are people on the ground, who can intervene at the earliest stage before things get out of hand and know how to make just the right amount of noise— not too much to cause more trouble, and not too little to have no effect.

Interlocutors also talked about the importance of (ku)penya [successfully work through] and kujitoa [extricate oneself] in order to avoid abuses. Both kupenya and kujitoa indicate the ability to maneuver and avoid violations through context dependent means: to make sure you are not in the wrong place at the wrong time, that you can talk yourself out of trouble, or know who to call on at the right moment.

In conclusion, from collectively mobilizing to go to a police station, bolstered by weekly meetings to strengthen a local rapid response network, to loudmouths and cultivating skills at kupenya and kujitoa, the protection strategies of victims, survivors, and activists are embedded in everyday relationships. Even as these grassroots interventions do not always render the hoped-for results, especially during a pandemic and lockdown that has exacerbated violations while limiting more formal forms of redress, they are often the first and last line of defense, and the most effective form of protection that many people have.

As we continue to work towards the protection of those subjected to human right abuses, finding ways to amplify and support such networks—loudmouths and their various tactics—is of crucial importance. The challenge of such work is that it might mean not starting with the protection of formal human rights, but rather the strategies, tactics and relationships of those on the frontline of human rights abuses.

Wangui Kimari, PhD, is a social justice activist and anthropologist. She is the participatory action research coordinator for the Mathare Social Justice Centre in Nairobi, Kenya and is currently writing a book on the ways in which militarized forms of urban governance create regimes of exclusion.

Steffen Jensen works at the University of Aalborg and DIGNITY in Copenhagen. He has published on human rights, urban governance as well as  police and gang violence.

Tobias Kelly is an anthropologist based at the University of Edinburgh. He has written extensively on human rights, torture and political violence.

Kari Øygard is an anthropologist working at DIGNITY, the Danish Institute Against Torture.