In the late Ottoman Empire, women organized protests and fought for equality. Now they are fighting to survive in Turkey. 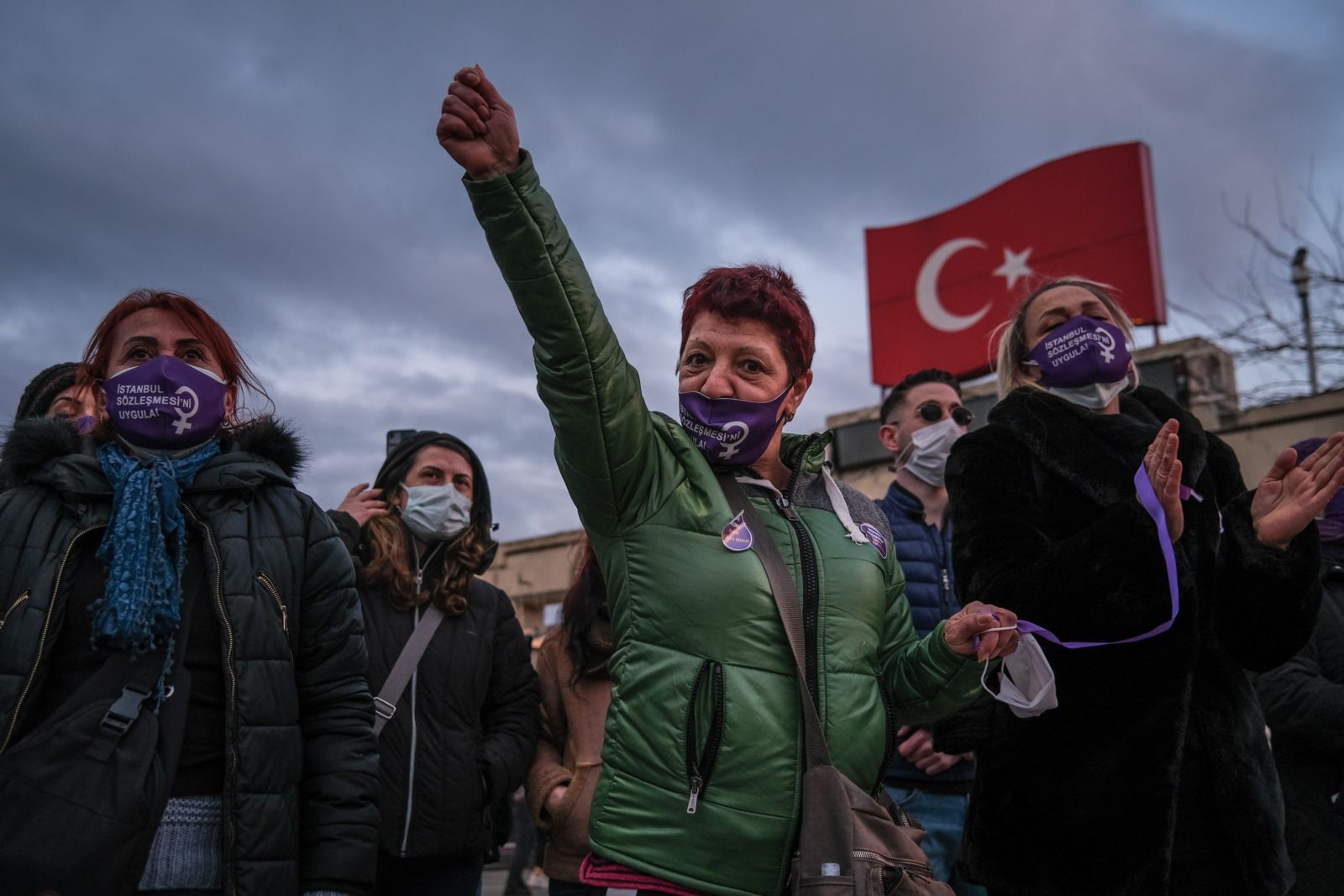 Women shout slogans during a protest against Turkey's decision to withdraw from the Istanbul Convention in Istanbul, Turkey, 24 March 2021. The Istanbul Convention is an international accord designed to protect women, which was started by the Council of Europe in 2011 for the Prevention of Violence against Women and Domestic Violence, and is signed by 45 European countries as well as the EU as an organization.  EFE/EPA/SEDAT SUNA

Women in the Ottoman Empire did not remain silent against discrimination and injustice. They organized activities and published newspapers and magazines to raise their voice in the late 19th and the early 20th century.

With the fall of the Ottoman Empire and the rise of a new republican regime in the 1920s, the reforms put in place by the Turkish president at the time, Kemal Ataturk, banned unequal conditions for women. The Civil Code of 1926 brought equality between men and women and other secular reforms in the 1920s and the 1930s dissolved sharia law for Muslim women. Polygamy was prohibited, and divorce and inheritance rights were recognized. Women gained political rights and universal suffrage in 1934 long before many European countries. All these attempts occurred first in a predominantly Muslim country.

The struggle of women for their rights since the late 1890s in the Ottoman Empire and the vision of Ataturk in the 1930s drew a road map for women on the path of emancipation and fortified their social, political, and legal rights. Thanks to the struggle of women for equality in the Ottoman Empire and the reforms of Ataturk, the public visibility of women increased and equality between men and women were established at least on paper, if not in everyday life and in all places of the country.

However, the relatively liberated space for women was still far from full equal recognition between men and women in all spheres. Women in the rural areas had limited opportunities for economic independence in the post-war period and it was common practice enforcing women in rural areas to marry at an early age.  Women who were economically independent were often subject to domestic violence and suffered primarily in silence. The sexist state policies showed itself in the guise of virginity tests, which were widely practiced until 1998 when a new law limited its practice under very strict conditions and only with a magistrate order.

Fast forward to the new millennium, with the rise of the conservative AK Party in 2003, religious-based values started shaping politics and social life in Turkey. There has been an increase in the number of femicide cases and the use of violence against women has been more brutal and ruthless in the last years. The public visibility of femicide cases has surged thanks to the efforts of feminist movements. The We Will Stop Femicide Platform (the Platform hereafter) was established in 2010 in Istanbul by a number of feminist activists who successfully opened new branches across the country to fight against femicide in a relatively short period of time.

In 2020, 408 women were murdered by men. The members of the Platform regularly organize events across Turkey to draw attention to the weakening democratic deliberation in the country. The factors that lead to femicide cannot be reduced to an act of individual violence. The collective factors are evident from the discourse of certain politicians to the men who justify their reasons for harassment of women in the bus and on the street based on patriarchal, religious, and conservative views.

As the mainstream media has been transformed into the mouthpiece of the ruling government, the Platform’s activists’ views are not able to find a widespread outlet. But thanks to the use of digital space and the efforts of activists, each offense against women finds an important place in social media. The activists created a digital memorial website to record the stories of women who were killed by men, explaining how activists use the digital platform to commemorate victims and inform the public about each femicide case. The online dissemination of the stories of murdered women fosters the formation of a public opinion on femicide.

But what makes the activists of the Platform an inclusive democratic social movement lies in their struggle to fight for the right of other vulnerable groups. For example, a group of activists from the Platform’s Eskisehir branch expressed that they are protesting the discourse of politicians, violence against women, and violence against the LGBT+ community. Their protest was particularly important after the brutal murder of Hande Kader, who was an LGBT+ activist and sex worker. Kader was murdered by her customers, who later burned her body to the point it was nearly unrecognizable when the police found her in one of Istanbul’s forests. Dozens of protests were organised for Kader, and the Platform was one of the leading organizations in the mobilization by using its online presence.

The Platform’s activists also support Pride month and state that transgender murders are political murders. Participation in these events is enabled through digital communication.  Aside from sharing photos and videos to mobilize more people, the activists organize events to protest court decisions and sexist speeches delivered by politicians. They also take to the streets through night-walk events which have been organised on the March 8 since 2003, to increase the public visibility of women and highlight their liberty of going outside during the night. In later years, these events were violently suppressed by the police.

Against all challenges, more than a century-long struggle of women galvanized hopes for a democratic and plural democracy through which the required changes in the political and legal realm can be attained.

The activists spent strenuous efforts for the effective implementation of Istanbul Convention, which was first signed by Turkey and many other countries in Istanbul in 2011 to combat violence against women. However, the Presidential decree signed by Erdogan on March  20 2021 declared withdrawal from the Istanbul Convention. This withdrawal created shockwaves across the world and it was condemned. Justice, for many women in Turkey, was butchered and betrayed with this withdrawal. Women were left alone with no sufficient legal protection while striving to survive against femicide and different forms of gender-based violence. Gülsüm Kav, the Head of the Platform, uttered the perilous implication annulment of the Istanbul Convention, stating: “The convention highlights preventive measures and envisions creating a society in which violence cannot flourish. This also indicates an egalitarian society by realizing gender equality in the entire society by all means, including education. The Convention would safeguard the lives of women, don’t even think of touching it, but implement it!”

Taking new resisting initiatives with the activists of other stigmatized communities by using the digital space, online media, and demonstrating their resilience and resistance, women in Turkey create a network of solidarity with the survivors of other vulnerable groups who have been striving for justice and forced to live on the margins of society. Against all challenges, more than a century-long struggle of women galvanized hopes for a democratic and plural democracy through which the required changes in the political and legal realm can be attained. We all must show our solidarity with this unyielding struggle of women in Turkey and elsewhere who fight for life and dignity. Without the emancipation of women, we all will be the prisoners of our own lives.

Dr. Cayli Messina is the senior research fellow at the University of Derby in the UK. He has extensively published on crime, violence, human rights, and social movements.