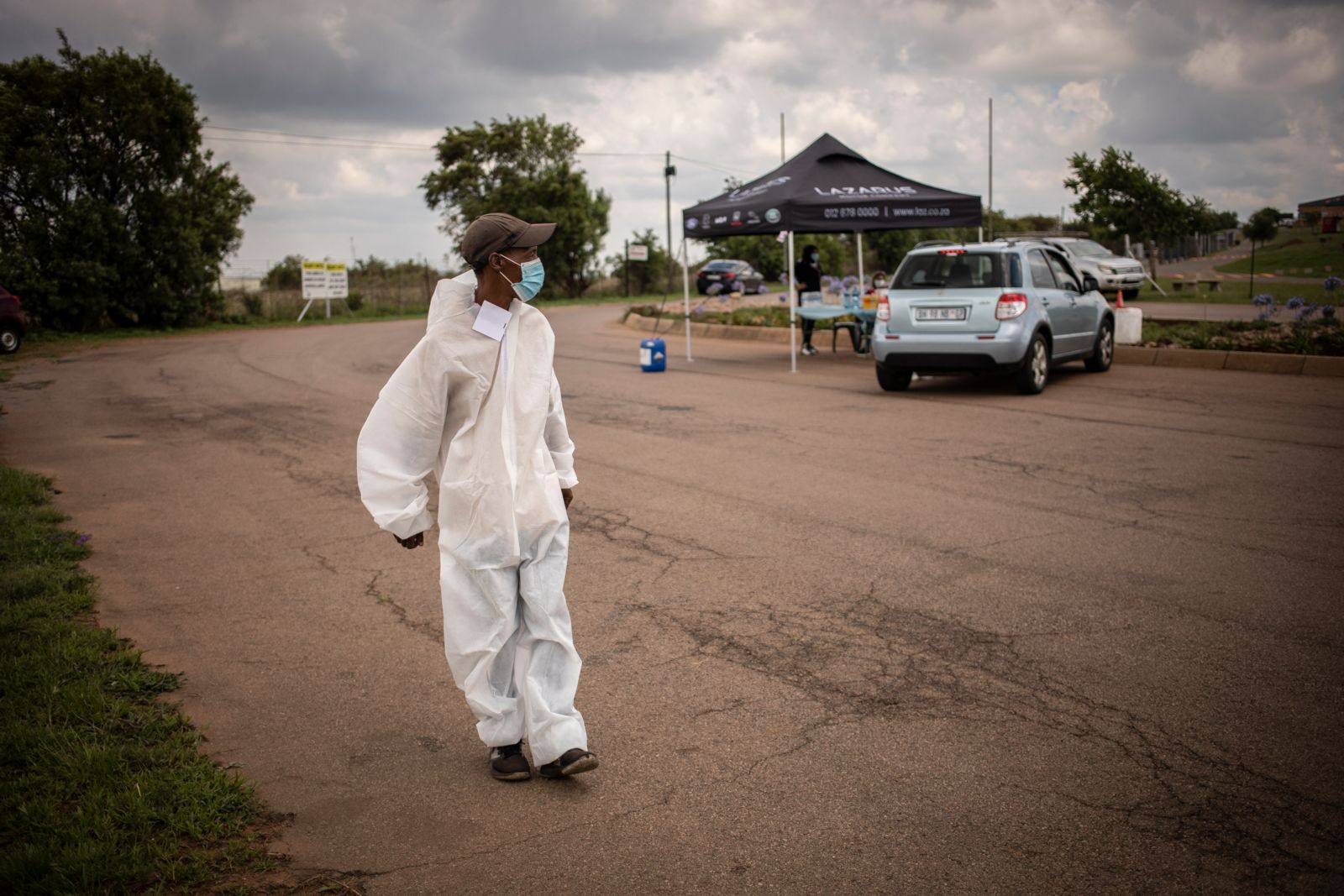 A volunteer wears personal protective equipment (PPE) at a Covid-19 drive-through vaccination facility at the Zwartkops Raceway in Pretoria, South Africa, in December 2021. The facility opened in an effort to increase vaccinations prior to the start of the annual end of year holidays, amid Omicron variant fears. EFE/EPA/Kim Ludbrook

Over five decades ago, the first codified global human rights instrument on racial injustice, the International Convention for the Elimination of All Forms of Racial Discrimination (ICERD), was adopted by the United Nations General Assembly. As we celebrated the 56th anniversary of the ICERD a few months ago, it is disheartening that two years since the beginning of the COVID-19 pandemic, inequalities in vaccine and healthcare access continue to deepen along racial and intersectional lines.

In the 1960s, states in Latin America and the Caribbean, Asia and Africa were keen for this standard to be adopted. They had lived through slavery and colonization which destroyed their circular economies, witnessed deep-seated injustices such as those in Palestine and apartheid South Africa, and countenanced ill-treatment of their kin communities who lived as less than full citizens in the developed world.

The Convention’s goal was clear: unlike other human rights instruments, it expressly recognized how structural discrimination configured along different identity markers including race, denied access to rights to subjugated populations. Ratifying states agreed to ‘eliminate’ racially discriminatory structures and processes—both explicit and indirect—by advocating for the adoption of administrative, legislative, and judicial measures backed by a strong institutional infrastructure.

The extent to which this mandate has been successful is up for debate. A key question today is if this standard is able—and whether those who are its guardians are willing—to eliminate structural discrimination in the global response to the COVID-19 pandemic.

In the context of a pandemic, some of the major challenges to ensuring global equitable access to basic medical tools are barriers related to intellectual property that protect monopolies of big pharmaceutical companies with production concentrated in the global north.. Over 100 states have supported a request to the World Trade Organization to temporarily waive intellectual property barriers under the TRIPS Agreement on technologies that could assist in the prevention, containment, and treatment of the pandemic.

Yet, powerful wealthy states in the European Union, most notably Germany, Switzerland, and the United Kingdom have opposed the request, stalling negotiations for over a year and putting big pharma interests ahead of the right to life.

While these and other OECD countries hasten to declare the end of the pandemic, for lower income countries the end is far from in-sight. In mid-March, news broke of closed-door negotiations over the intellectual property waiver between the EU, United States, South Africa and India, however, the resulting draft has been widely criticized as weak and inadequate.

If these are mere symbolic steps to make it appear as though the institutions have taken up the interest of the people, they will do little to address the issues we are raising. In order to confront structural discrimination, it is critical that the EU, U.S. and other powerful states earnestly engage in negotiations to contend with the substance of the May 2021 TRIPS waiver request to cover all IP barriers on COVID-19 vaccines and testing and treatment.

The failure to secure equitable access to COVID-19 healthcare technologies at the global level cannot simply be framed along a rich country-poor country divide. While the pandemic has deeply affected global society, evidence of its disproportionate impact on people of color, especially women of color, is disquieting. This is the direct result of structural failures in eliminating identity-based inequalities, products of a global economic system and political order structured by colonialism’s extractive and racially exploitative logic. Numerous UN documents like the Durban Declaration and Programme of Action have underscored this analysis.

If there has been any doubt that COVID-19 vaccine and healthcare inequity has roots in racially discriminatory structures and attitudes, it should be dispelled by the waves of discrimination against Black people and other communities of color. This includes the anti-Asian rhetoric and violence that surfaced at the outset of the pandemic (and continues), and the proliferation of racially offensive material in the wake of South Africa’s discovery of the Omicron variant, which resulted in ill-conceived travel restrictions against multiple Southern African states.

The impact of the pandemic has not been borne by members of all racial groups equally. The evidence available suggests a racialized divide both within and between states. Where there is data available within states it is clear that the inequitable access and distribution of vaccines and other healthcare technologies has had racially disparate impacts on racial and ethnic minorities, Black people, iIdigenous peoples, women, LGBTQ populations, and persons with disabilities.

If there has been any doubt that COVID-19 vaccine and healthcare inequity has roots in racially discriminatory structures and attitudes, it should be dispelled by the waves of discrimination against Black people and other communities of color.

This inequity has undermined racial equality between states because it entrenches the racial divide between the Global North and Global South, thus reproducing colonial-era racial hierarchies and patterns of racial subordination. For instance, it is estimated that as of January 2022, about 70% of the population in rich countries has been vaccinated, compared to the mere 15.32% of the population in Africa three months later. Failure to cooperate internationally on equitable access to COVID-19 healthcare has prolonged the force of the pandemic and contributed to widespread and avoidable fatalities in African, Asian, and Latin American and Caribbean countries.

The structural schism does not only manifest in terms of the immediate loss of lives and mass suffering. The Economist Intelligence Unit forecasts that vaccine inequity could generate $2.3 trillion losses between 2022 and2025 in countries that fail to vaccinate at least 60% of their population, which are most  likely to be in Africa and Asia. The International Labor Organization estimated that this would delay  the goal of eradicating poverty by five years.

This could have long-lasting structural consequences that  continue to reproduce colonial-era racial hierarchies despite their formal abolition. Yet, international human rights law is clear: states owe an obligation to cooperate when necessary, including when they act as members of multilateral organizations such as the WTO, to assist other states in ensuring that their peoples’ economic and social rights are realized.

These duties, applied to the pandemic, have been delineated, among others, by the United Nations Committee on Economic, Social and Cultural Rights. Demanding that powerful Global North states do their part in ensuring that the rights to life, science and health are enjoyed by all without discrimination of any kind is the least that can be asked of them as one small step towards addressing the enduring legacy of colonialism.

As a consortium of organizations from across the Global North and South working collaboratively for human rights, we have approached the United Nations Committee on the Elimination of All Forms of Racial Discrimination with an urgent appeal (updated on March 28) that nearly 100 organizations and individuals have endorsed. We back the call from developing countries for a TRIPS waiver as requested by India and South Africa in May 2021, and are examining a multitude of legal avenues to compel the free flow of medical technologies that are desperately needed.

We collectively believe that the visionaries who called for the elimination of all forms of racial discrimination in 1965 would be proud to see ICERD effectively address the structural racial consequences of one of the biggest health crises ever faced by humanity.

Mandivavarira Mudarikwa,who is an attorney at the Women’s Legal Centre.

Fernando Ribeiro Delgado, who is the program coordinator of the Strategic Litigation Working Group at ESCR-Net.

Labila Sumayah Musoke is a program officer on the Right to Health at the Initiative for Social and Economic Rights in Uganda.

Dr. Barbara Ransby, who is an advisor to the Movement for Black Lives, and John D. MacArthur Chair and Distinguished Professor in the Departments of Black Studies, Gender and Women's Studies, and History at the University of Illinois at Chicago.

Sasha Stevenson, who is the head of Health and an attorney at SECTION27.

Anele Yawa, who is the general secretary of the Treatment Action Campaign, one of the most globally important civil society organisations active on HIV, and based in South Africa.

Ohene Ampofo-Anti is a program associate at the Center for Economic and Social Rights.

Joshua Castellino is the executive director of Minority Rights Group and former (founding) Dean of the Law School at Middlesex University.

Meena Jagannath is the director of Global Programs and coordinator of the Global Network of Movement Lawyers at Movement Law Lab.

Tian Johnson is lead of the African Alliance, co-chair of the African Union/Africa CDC Vaccine Delivery Alliance and convenor of the Vaccine Advocacy Resource Group.