Foreign aid is always political, and elevates the risk of a government crackdown on NGOs.

From 1993 to 2012, 39 of the world’s 153 low and middle-income countries enacted restrictive laws on foreign funding to civil society organizations, both domestic and international. In some cases, these governments banned overseas funding for local actors outright, while in other instances, they imposed new rules restricting which locally-operating NGOs could receive aid, and for what purpose.

Both activists and experts have been sounding the alarm about efforts to roll back civil society. New research, recently published in the journal World Development, sheds light on the crackdown’s triggers and possible remedies. Using original data on the new laws, our statistical analysis suggests that higher levels of foreign aid inflows are associated with higher chance of legal crackdowns. Moreover, the risk of a crackdown increases when the country faces nationally competitive elections.

At base, the issue is one of political control. On the one hand, rulers love foreign aid, since it helps pay the bills and gives them the freedom to spend on projects that may buy them citizen support. When foreign aid is channeled through government agencies, moreover, it boosts rulers’ political legitimacy. When leaders decide who gets how much money, when and where, citizens treat them with greater deference.

Often, however, donors channel a portion of their aid through civil society groups, instead of the government. They may do so because they fear government corruption, seek to empower civil society, or believe that non-governmental actors are best equipped to deliver the services or advocacy efforts in question.

When foreign aid flows directly to civil society, it boosts those groups’ autonomy and influence. In addition to diluting rulers’ political control, civil society groups may champion issues that the opposition supports. As a result, rulers often view civil society as part of the opposition, especially during competitive elections.

Controlling for a wide variety of other factors (such as per capita income, regime type, relationships with the US, and much more), our statistical analyses reveal that foreign aid modestly increases the risk of a crackdown. For example, the average annual aid package to restricting countries is USD 750 million. Our findings suggest that when governments receive roughly three times that amount—some USD 2.1 billion per annum—they have a six percent greater chance of adopting a restrictive law.

Six percent may not seem like a lot until one considers the large number of countries we studied over nearly 20 years. Statistically, each country has a very low probability of passing a specific law of any kind in a given year.

Importantly, legal crackdowns are even more likely when foreign aid interacts with nationally competitive elections. In such cases, 2.1 billion in annual aid nearly doubles the risk of a crackdown, prompting an 11% greater chance of the government passing a restrictive law. 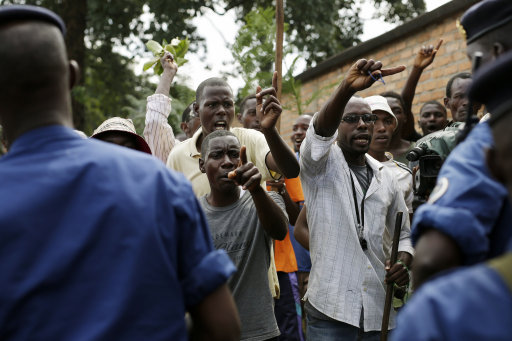 Demonstrators shout at riot police in Bujumbura, Burundi. Political unrest following the president's decision to seek a third term has resulted in numerous crackdowns on civil society within the country.

To put this into perspective, as many as 35 of the world’s 153 low and middle-income countries have received annual aid of over two billion USD, including Afghanistan, Egypt, India, Iraq, and Zambia.

Why does foreign aid elevate the risk of a crackdown, and why does this risk almost double following a national election? The explanation, we believe, is that rulers fear that foreign-funded NGOs may directly, or indirectly, assist political rivals.

Foreign-funded NGOs are threatening for all manner of reasons. First, they tend to enjoy strong reputations among international audiences, a credibility that is both cause and effect of the aid they received. They also tend to unearth sensitive information, fueling concerns over government malfeasance. Many leaders of foreign funded NGOs, moreover, enjoy close personal ties to international personalities such as activists, journalists, and diplomats. As previous research has demonstrated, ties of this sort can be crucial sources of visibility and influence.

But why do governments tend to move against foreign funded NGOs in the year after a nationally competitive election?

First, political passions are often highest after competitive elections, following months of sloganeering. Second, electoral losers often contest the outcome, believing their victory was stolen. In addition, once national elections are over, governments may perceive a window of opportunity. Because they view foreign-funded NGOs as aligned with the opposition, the newly victorious rulers seek to ensure their political rivals are weakened.

What can local and international actors do to combat this trend?

First, they must realize that foreign aid is always political, regardless of whether it flows through governments, unions, churches or NGOs. Money enhances the legitimacy and influence of those who receive and disburse it. Aid inflows will always strengthen, or disrupt, established patterns of control. Larger inflows of aid will cause even greater uncertainty as actors scramble for advantage. Donors may proclaim that their assistance is purely technical, but few on the receiving end will buy this argument.

Second, both international donors and domestic NGOs must realize that the risk of a crackdown is often highest following contested elections. NGOs and donors should prepare in advance with reserve funds, emergency plans and pre-election legislation to protect them in the post-election period. In the run-up to elections, governments may be more willing to tie their hands than immediately thereafter.

Third, our statistical analysis shows that the likelihood of crackdown is reduced when international NGOs have a larger, formal, in-country presence. More specifically, when the number of per-country registered international NGOs is roughly triple the sample average of 667, the risk of a legal crackdown drops by 12-15%.

About 40 countries in our sample have over 1800 registered international NGOs, and while high numbers of this sort do not guarantee protection, they do reduce the probability that governments will pass restrictive foreign aid laws.

Finally, domestic civil society must raise more funds locally. External actors can and should help, but empowered and thriving civil societies must inevitably spring from below. No matter how well intentioned, foreign aid cannot produce grass roots empowerment from above.

Kendra Dupuy is a researcher in Norway’s Chr. Michelsen Institute, and is completing her PhD in political science at the University of Washington, Seattle