Those that justify restrictions on foreign funding for civil society have strong normative arguments that cannot be dismissed lightly.

During the last ten years, many states around the world have taken measures to restrict or openly resist the activities of foreign governments and non-state actors that support local civil society groups. The 2011 raid on foreign and foreign-funded NGOs in Egypt and the harassment of what are now called “foreign agents” in Russia are only the most prominent cases of a trend that is manifold and covers all world regions and regime types. This phenomenon, which has been dubbed the “closing space” , is part of a general increase in resistance against the international promotion of democracy and human rights.

Given that external civil society support constitutes a key element in existing strategies of democracy and human rights promotion, the closing space is of immediate relevance for governments, international organizations and NGOs that have committed themselves to this endeavor. Correspondingly, in recent years, the phenomenon has received increasing attention by civil society activists, policy-makers and academics. Yet, as we argue in a PRIF report on which this contribution draws, existing studies on the closing space largely ignore, or deliberately downplay, the normative dimension of the problem at hand. To the extent that the justifications offered in order to defend restrictions on foreign funding are considered at all, they are almost immediately dismissed as poorly veiled rationalizations for violations of international law uttered by some incumbent governments that solely want to remain in power. Politically, this is understandable given that the closing space phenomenon usually pits vulnerable civil society groups against much more powerful governments. And, yet, this one-sidedness is both remarkable and problematic.

A promising response to the spread of closing spaces cannot but include a serious engagement with the concerns raised by those many governments that are pushing it.

It is remarkable because the critique of external interference in the name of national sovereignty and collective self-determination points to well-established, if certainly not uncontested, international principles. The international norms on which external civil society support is based, in contrast, are informal and implicit. It is problematic because the proliferation of closing spaces around the world suggests that this problem cannot be handled by simply trying to convince, marginalize or, if need be, fight a few “misguided” governments. A promising response to the spread of closing spaces cannot but include a serious engagement with the concerns raised by those many governments that are, in one way or another, pushing it. This is all the more crucial because the international practice of civil society support, and with it the political debate about foreign funding and closing space, is embedded in fundamentally asymmetric power relations and shaped by deep-seated post-colonial legacies.

Those that criticize restrictions on foreign funding like to point to international human rights norms as established, in particular, by the International Covenant on Civil and Political Rights (ICCPR). In a prominent reading of this covenant presented by the UN Special Rapporteur on the rights to freedom of assembly and of association, Maina Kiai, the right to freedom of association includes the ability “to seek, receive and use resources—human, material and financial—from domestic, foreign, and international sources”. Kiai, whose reasoning received unqualified support by most North-Western governments, explicitly rejects the argument that foreign funding restrictions may be justified as means to protect national sovereignty as “an illegitimate excuse”. The right to collective self-determination, which features prominently in ICCPR’s first article, is not even mentioned. For Kiai, it is not considered to be potentially harmful to a “democratic society” when even large sums of foreign funds are given to specific individuals, unregistered or registered civil society groups by external donors that, in the country at hand, have no democratic legitimacy whatsoever but pursue their own political agenda. 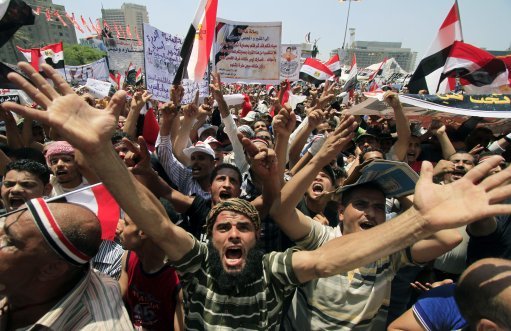 In 2011, Egyptian protestors took to the streets in Cairo to protest US funding of democracy groups.

This is, at the very least, a fairly particular interpretation of international norms. Contemporary debates about the meaning of national sovereignty and collective self-determination notwithstanding, these principles still constitute core pillars of the existing international order. They are, also, necessary elements of any democratic political regime as we know it. In principle, democratic regimes, as (necessarily imperfect) attempts to institutionalize collective self-determination, do not allot any legitimate role to external actors that are neither subject to their political authority nor part of the demos. Given the continuing experience in the global South with political paternalism and economic exploitation, covert meddling and overt intervention by North-Western states, concerns about external interference are widespread and genuine. While it is hard to say what “the population” is really thinking, it is safe to say that, in many cases, it is not only incumbent governments that view the influx of foreign funds and the presence of foreign agencies that support domestic civil society groups with caution (see, for instance, our discussion on Bolivia, Egypt and India).

This is not to say that those governments that justify restrictions on international civil society support are simply correct. Nor is it to argue that these governments shy away from using normative arguments strategically for other purposes—they certainly do. It is only to suggest that we are confronted here with a complex conflict in which both sides make normative claims that cannot and should not easily be dismissed.

In sum, a global debate is needed in order to discuss, revise and advance the international norms that regulate—enable and constrain—foreign civil society support. In order to facilitate such a debate, academics and policy-makers should acknowledge that the issue of foreign funding is indeed a specific phenomenon that comes with particular problems. If the political aim is really to prevent or reverse the general closing of civil society spaces around the globe, politicians, civil society activists and engaged scholars are well advised to not weaken their support of the right to freedom of association by intermixing it with the notion of an extensive right to external civil society support.