Without addressing women’s security, we can’t hope for equality

Understanding why and how insecurity affects women is key to overcoming inequality across all dimensions of empowerment.

For the past year I have been working in Kenya with Mary (a pseudonym) and the organization she created, to help women victims of sexual violence file complaints about police misconduct related to their cases. Mary herself was turned away from a police station during the 2007-08 Kenyan post-election crisis, when she tried to report being raped. The police officer on duty told her that rape was not a serious crime. Nine months later, she became a mother.

This was far from an isolated case. According to the International Center of Transitional Justice (ICTJ), many women had similar experiences with the Kenyan police during the post-election violence. Some women were raped by police officers, and there were no investigations or prosecutions, even in cases where women could identify their perpetrator.

“There are too many examples where police fail to respond or protect our rights and leave us vulnerable and in a state of insecurity,” Mary says. “They’re trained to use force and brutality to enforce the law or peace. And more than that, they use rape as a weapon of intimidation.”

The hope is that the National Police Service Commission will go beyond “removing  a few bad apples” but conduct a proper nation-wide vetting process, based in part on complaints from women victims who can identify abusive police officers or negligent commanders. In theory, vetting police officers should reduce the risk of further police abuses, including against women victims of violence, and contribute to restoring civic trust. But, so far, despite substantial evidence and numerous reports, not one Kenyan police officer has been removed for misconduct towards women.

Without guaranteeing their basic rights to security, all other forms of women’s empowerment remain out of reach.

In times of conflict or state repression, police and other security sector agencies are frequently implicated in massive human rights abuses. Their reform is a difficult, but essential, component of guaranteeing violations do not happen again. Without it, victims and the community will continue to fear law enforcement and live in a constant state of insecurity. This has particular implications for women. Without guaranteeing their basic rights to security—to be free from crime and violence and (if they are victims of crime) to have access to adequate legal protection and remedies—all other forms of women’s empowerment remain out of reach.

Worldwide, statistics indicate that there are still significant differences between women and men’s access to health care, education, and economic and political opportunities, known as the “gender gap”. And this divide is biggest in many of the countries experiencing conflict, when women are particularly vulnerable to varied forms of violence and rights violations. According to the UN’s calculations, even though the gap is narrowing on a global scale, women are still over 100 years away from achieving gender parity. Yet women will only enjoy equal rights to men if we can close the gap.

Lack of security is a significant, but often overlooked, reason for this persistent inequality. Even in some post-conflict countries where governments have enacted reparations and other specific policies to improve women’s health, education and employment prospects, the gap still looms large. The women I work with in Colombia, Uganda and Kenya tell me that while the government may offer health services, access to education and skills training, they are unable to take full advantage of these when they are constantly at risk of experiencing violence and rights abuses and are left unprotected by police and other security agencies. 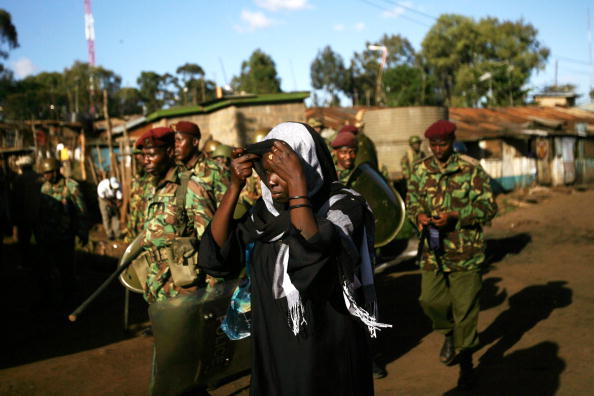 A woman in Nairobi walks by as Kenyan police search for supporters of the opposition leader.

In Colombia, where efforts are underway to end the 50-year armed conflict, we see similar risks to women facing insecurity and police neglect. Over three million women have been displaced from their homes during the conflict, and over half of them report that a lack of security affects their ability to access health services and stable employment. Even the Colombian government’s best efforts to ensure women’s political representation and participation in designing reparations for victims of war are undermined. A recent ICTJ report revealed that women in some regions were being intimidated and threatened to stay out of the reparations process.

The historical and continuing neglect of women victims of violence by police and the justice system in Colombia is well documented and culturally entrenched. Without systemic improvements to police responses to women, different forms of violence—from domestic violence, to sexual harassment and violence, to threats and intimidation for political activity—will continue to inhibit their participation in society. This is especially harmful now, as Colombia embarks on a historic peace process in which women’s meaningful engagement is key to building sustainable peace.

These examples speak clearly of the need for security sector reform if societies dealing with a legacy of past abuse are to overcome historical tendencies to ignore or de-prioritize women victims. Mary identifies the key issue: “When women are targeted for human rights violations because they are vulnerable and the police refuse to enforce the law, how can women hope for gender equality?”

Understanding why and how insecurity affects women is key to overcoming inequality across all dimensions of empowerment. Without including institutional reform that achieves women’s security, we are missing a significant piece of the puzzle. And without this piece, we are condemning women to another century of inequality.

Amrita Kapur is a Senior Associate with the Gender Justice Program at the International Center of Transitional Justice.