A recent political uproar in South Korea has exacerbated the public’s diminishing trust in government officials.

South Korea is facing high levels of income inequality, significant government corruption, and growing public unease with government officials. In this tense political climate, senior education ministry official Na Hyang-wook recently made outrageous comments that the country should implement an official system of social class, and that 99% of the South Korean people are “like dogs and pigs” who only need to be fed and kept alive.

Na didn’t stop there, berating the public for their outpouring of sympathy towards a 19-year-old subway contract worker crushed to death by a train. His comments were particularly inflammatory because the death of this young man—reportedly underpaid compared to coworkers, and working without adequate safety measures—has become a rallying cry against economic inequality. Many viewed his death as a symbol of the overwhelming class distinction between South Korea’s “gold spoons” (children born wealthy) and “dirt spoons” (children born poor). Na’s comments gave the damaging impression that public officials don’t care about the poor. 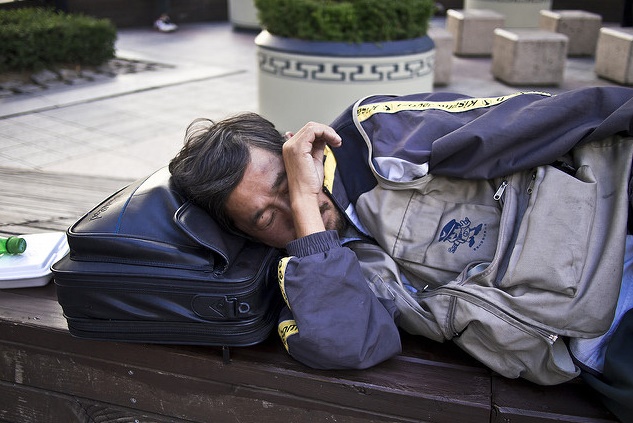 A homeless man in Seoul. Homelessness is one symptom of South Korea's struggles with a growing epidemic of economic inequality.

Prime Minister Hwang Kyo-ahn and Education Minister Lee Joon-sik apologized for Na’s comments and Na himself made a tearful apology to the South Korean people in a parliamentary meeting. Na claimed he had unintentionally made these comments under the influence of alcohol. But the public outcry continued, and Na was quickly fired.

While it’s not surprising that many Koreans would take exception to Na’s comments, these events also illustrate an interesting shift in Korean public attitudes. In the 2011 National Human Rights Survey of South Korea—administered to 1,500 people by the Institute for Social Development and Policy Research at Seoul National University—I observed a shift in the Korean public’s interest in civil and political rights to a greater focus on economic, social and cultural rights. Today, research suggests that South Koreans regard employment and income as part of their basic human rights. As Figure 1 notes, when asked: “What do you think are the biggest reasons for human rights violations and discrimination in South Korea?” 41% of respondents chose “economic status issues, such as income and occupation,” while over 70%, favored “the mandatory assignment of permanent positions to temporary employees who work for two years or more.” Also, this shift isn’t just more support for human rights overall: these highly favorable attitudes toward economic and social rights contrast with shrinking support for policies related to promoting civil and political rights. The percentage of respondents supporting a death penalty prohibition, for example, fell from 47% to 23% 2005 - 2011.

At the same time, the data also show that the Korean public is significantly mistrustful of the government and public officials. Immediately prior to Na’s statements, the public had already been outraged by a series of corruption cases, including the investigation and historic indictment of a Chief Prosecutor, Kyung-jun Jin, charged with influence peddling and bribery. Indeed, the Gallup World Poll shows that Korea has one of the lowest levels of public trust in government among members of the Organization of Economic Cooperation and Development (OECD), a club of economically developed countries. Figure 2 shows that South Koreans’ level of trust on the government is 34%, 8 points lower than the OECD average.

Illustrating this distrust are the 2011 answers to the question: “Who do you think is mostly responsible for violating human rights in South Korea?” Respondents named three government institutions as most responsible, including the military (17%), national police (15%), and the Korean Prosecutor’s Office (14%). The Korean media has speculated that Na’s statements reflect the actual sentiments of government officials, and popular opinion appears to take the same view.

To further complicate matters, Na was a senior Ministry of Education official charged with directing national education policy, in a nation where education is sacrosanct. His comments were thus particularly painful for Koreans, many of whom trust the power and value of education. South Koreans have long viewed education as a medium for social mobility and mitigating economic inequality: for many, education is a ticket out of poverty. Parents regularly make major financial and emotional sacrifices for their children’s education. Teachers, school administrators, and educational officials have long been treated with great respect. As a result, citizens expect education officials to be particularly honest and well intentioned.

Figure 3. How Much Respect is There? 2011 National Human Rights Survey of South Korea

Indeed, Figure 3 shows that over 57% of respondents told the 2011 Korean human rights survey that “the right to education” was well-respected in the country, second only to respect for the right to health. But the Na furor may lead many Koreans to reconsider the trust they have long placed in the country’s education system—this potential attitudinal change needs to be monitored in the future surveys, including the 2016 National Human Rights Survey of South Korea, which is currently taking place.

Stark economic inequality paired with higher public interest in economic and social rights, alongside low trust in government, is creating a growing public opinion storm in Korea. Officials must work hard to curb economic inequality and tackle rampant corruption to boost public trust in government. The new anti-corruption law approved by the Korean Supreme Court is certainly a step in the right direction; it seeks to combat political corruption by imposing harsh penalties for bribery of public officials, private school teachers and journalists, without needing to prove that the gift was compensation for a specific favor.

A more progressive tax reform that would hold wealthy professionals and businessmen accountable, ensure fairer tax contributions, and use these additional resources to mitigate inequality, could also help.

Whatever the government does to tackle its image problem, it must be bold. The Korean public does not trust its government, and Na’s outburst has only made things worse. The government can begin to repair the damage, but only with significant effort.