The UNHRC should explore and employ a wide range of tools and mechanisms to address human rights violations, war crimes, and crimes against humanity. 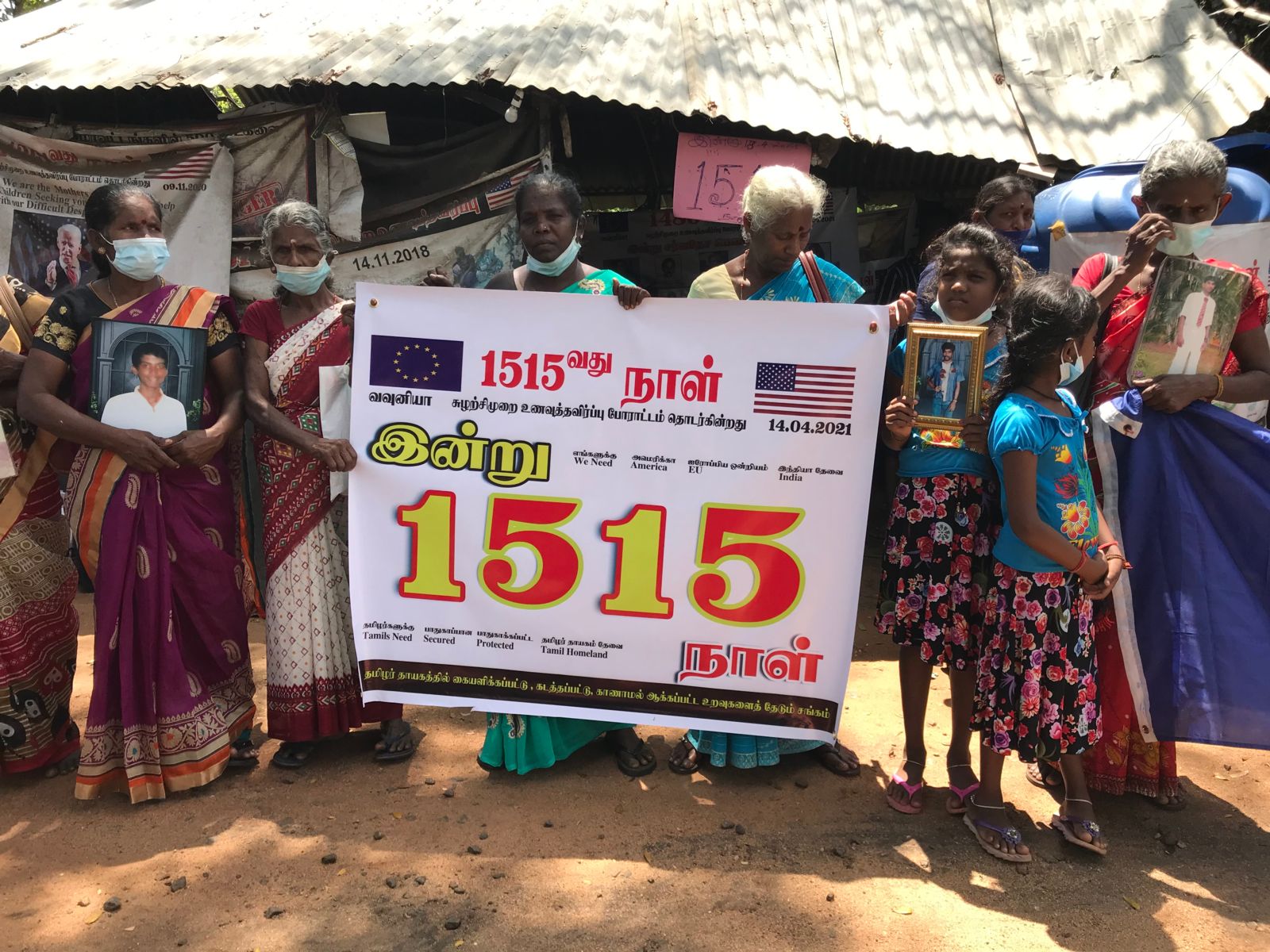 Vavuniya mothers and families of the disappeared mark 1,515 days of roadside protest and call on the international community, as well as the UN, to help Tamils combat Sri Lanka's genocidal regime. Photo credit: Tamil Guardian

Sri Lanka has a long history of violence towards its Tamil and Muslim populations. Following the independence in 1948, a foundational Sinhala-Buddhist nationalism took shape and continues to permeate through society in the economic, social, and political threads of daily life.

The widespread occupation of Tamil-speaking regions in the North and East of the island, coupled with numerous human rights violations during the armed conflict that lasted from 1983 until its brutal end and genocide in 2009, force Tamils to continue facing oppression.

In February 2020, the state formally withdrew from its commitments to the UN Human Rights Council (UNHRC), including resolution 30/1 which called for the establishment of international accountability mechanisms for atrocity crimes.

With Gotabaya Rajapaksa elected as President in 2019, the human rights situation in Sri Lanka is progressively detrimental for Tamils who continue to live in one of the most heavily militarized regions in the world, with a 2:1 ratio of civilians to military personnel, creating a climate of repression and fear.

Since Sri Lanka has demonstrated no political will towards domestic accountability measures post-2009, opportunities for justice lie within internationalized options such as the UNHRC and the intervention of member states through the establishment of alternative paths to justice.

On January 27 2021, the UN Office of High Commissioner for Human Rights (OHCHR) released a damning report on Sri Lanka’s deteriorating human rights situation, domestic state failures and its trajectory, revealing the country is on an “alarming path towards recurrence of human rights violations.”

The report examines the ongoing risks to human rights while emphasizing the need for urgent international action. It underlines the heightened and strengthened ethno-nationalistic rhetoric in Sri Lanka, specifically embodied in its government and military which are occupied by individuals previously accused of corruption or alleged to have committed war crimes. The deeply entrenched nature of impunity within these institutions grants perpetrators of war crimes to hold high positions of power, influencing the policies and day-to-day activities of the country.

Furthermore, the report advances the call for targeted sanctions against perpetrators of war crimes, the exercise of universal jurisdiction to promote accountability, and the end to surveillance and repression.

Following the record of ongoing human rights violations towards Tamils and Muslims, Sri Lanka’s current trajectory indicates the strong potential for renewed cycles of conflict. The current government has no intentions to pursue accountability measures that meaningfully address the concerns of Tamil victim-survivors.

The deeply entrenched nature of impunity within these institutions grants perpetrators of war crimes to hold high positions of power, influencing the policies and day-to-day activities of the country.

With a lack of legitimate and tangible effort domestically, it is glaringly evident that the deteriorating human rights situation in Sri Lanka requires urgency and robust action by the international community. Thus, on March 23 2021, the UNHRC passed resolution 46/1, which mandates the OHCHR to collect and preserve evidence of serious violations of international crimes committed in Sri Lanka and report on opportunities for accountability for these crimes.

Though this resolution is a step towards justice, it noticeably falls short of joint demands made by Tamil political parties and civil society groups, and  leaves many victim-survivor communities disappointed that the resolution did not go further to reflect the strong call for action echoed in the High Commissioner’s report. This highlights the UNHRC’s repeated limitations on providing justice for mass atrocity crimes in Sri Lanka, where strong decisive action is critical.

It is imperative to recognize the ethnocratic nature of the Sri Lankan state and the Sinhala-Buddhist supremacy it upholds, which is deeply linked to the government’s failed and disingenuous efforts towards accountability and justice. Decisive action beyond the UNHRC is still necessary – without it, Tamil and Muslim communities are at risk of a repeated threat of grave human rights violations.

Historically, Sinhala-Buddhist nationalism has informed the Government of Sri Lanka’s (GoSL) agenda of state-sponsored colonization of the traditional Tamil homeland in the North-East. Since Sri Lanka gained independence in 1948 with the majority political power at the hands of Sinhalese, the nation showcased a trend of “growing fundamentalism and an increasingly reactionary bond of religion, ethnicity, and state power”.

Thereafter, successive Sinhala-dominated governments have been targeting areas dominated by Tamil-speaking populations to claim historical rights to those lands, and re-engineer their population demographics through this colonization scheme labelled ‘Sinhalization’.

In 1978, the Constitution of Sri Lanka came into effect with an intentional purpose of enforcing an extreme form of Sinhalese-Buddhist nationalism. According to the Constitution, “The Republic of Sri Lanka shall give to Buddhism the foremost place and accordingly it shall be the duty of the state to protect and foster the Buddha Sasana”. This article remains unchanged in 2021.

Institutionalized Sinhala-Buddhist nationalism extends to matters of public health and social service as evidenced by the island’s COVID-19 pandemic response. Despite having committed gross human rights violations during the height of the armed conflict, General Shavendra Silva was appointed to head Sri Lanka’s National Operation Center for the Prevention of COVID-19 Outbreak in March 2020.

Ignoring guidelines by the World Health Organization, the state made cremation mandatory for individuals who die or are suspected to have died from COVID-19. After months of protests against this controversial ban on burials, the GoSL tactically designated Iranaitivu, an island recently reclaimed by Tamils after being under military occupation for more than 25 years, as the burial site for COVID-19 victims.

With the heightened militarization and Sinhala-Buddhist-only Presidential Task Forces, it is clear that the GoSL displays no political will to hold themselves accountable for the past, nor deconstruct its Sinhala-Buddhist fundamentalism.

In February 2021, tens of thousands of Tamils and Muslims joined in the Pottuvil to Polikandy (P2P) march against Sri Lanka’s autocratic rule.  which took place over five days. Protesters demanded an end to militarization and Sinhalization on the island, specifically across the North-East, as well as justice for the past genocide against Tamils.

Since the end of the armed conflict in 2009, Sri Lanka continues to prove itself as a nation that has failed to provide justice for victim-survivor communities and does not hold itself accountable, simply due to a lack of political will. The virulent  Sinhala-Buddhist nationalism that emerged since independence continues to permeate state structures and suppress Tamils and Muslims today.

Although the recently adopted 46/1 resolution by the UNHRC is a step in the right direction, the UNHRC should explore and employ a wide range of tools and mechanisms to address human rights violations, war crimes, and crimes against humanity. The path towards accountability and justice for Tamil survivor-victim communities must include continuous monitoring of the ongoing deteriorating human rights situation on the island and strong decisive action by various international bodies.

Nearly 12 years after the genocide and Tamils are still waiting upon justice, international options are their closest hope.

Vivetha Thambinathan is an Eelam Tamil doctoral candidate at Western University in Canada and the research director at Washington, DC-based PEARL (People for Equality and Relief in Lanka).

Thevya Balendran is an Eelam Tamil community organizer based in Toronto and Canadian advocacy officer with PEARL (People for Equality and Relief in Lanka).