While the unveiling of President Hassan Sheikh Mohamud helps reduce the risk of conflict, the hosting of yet another ‘election’ on a directly discriminatory basis without universal suffrage is far from ideal. 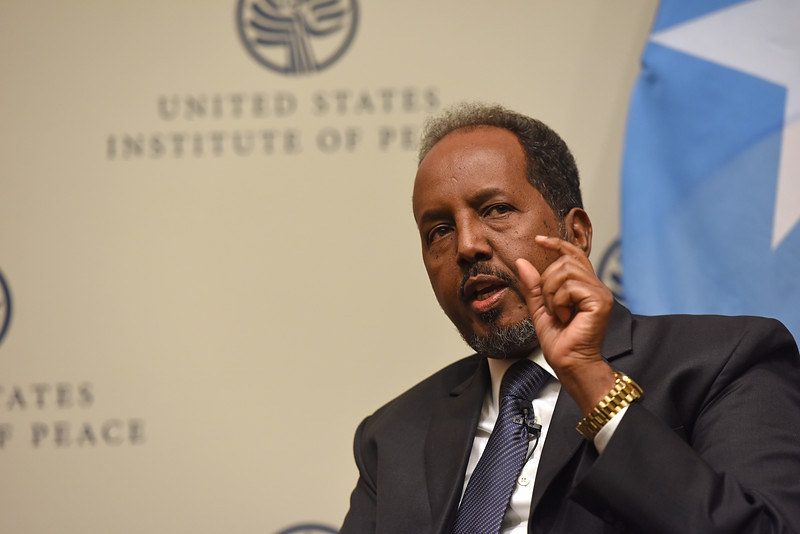 The president of Somalia, His Excellency Hassan Sheikh Mohamud, who was re-elected in May 2022, gave a public address and discussed political and security developments in his country in April 2016. Photo: U.S. Institute of Peace/Flickr (CC BY 2.0)

Although it took 18 months longer than scheduled, the conclusion of the elections in Somalia in May 2022 with a mandate for a new government comes as a relief. This outcome arrives in the face of very significant challenges: punches thrown among candidates, shots fired in Parliament, and some inter-clan fighting. Yet, despite persistent fears that the country would descend once more into large-scale inter-clan violence, a relative and fragile peace held long enough for the elections to be completed.

For anyone trying to engage in the process of establishing the rule of law and functioning institutions in Somalia, this conclusion signals a hope that decision makers will now return to their posts and undertake the governing that the country so desperately needs. This hope is particularly important beyond Mogadishu, the country’s capital city. The elections have proved disruptive to provincial administrations as local officials have inevitably been drawn into lobbying and politics, often travelling to Mogadishu for long periods to take part in meetings and leaving a vacuum in local decision-making.

The final piece of good news is that in the end, the incumbent president did not stay in power, despite making several moves that suggested he would try to. This signals that Somalia has, once again, achieved a more or less peaceful transfer of power from a serving president which augurs well for the future.

The road ahead, however, remains extremely difficult.

Rather than the single person, single vote system, the new president was elected by 327 members of Parliament (out of 328, one non-voting), who were nominated by a group of around 4,000 traditional clan elders. Without universal franchise, the inability of ordinary Somalis to hold leaders to account will continue. This is why many in the international community insist on putting the word “election” in quotation marks in reference to Somali political processes.

References are often made to the challenges concerning universal suffrage in Somalia, but in fact, away from the central government in Mogadishu, some states in the Somali federal system are showing what is possible—for example, the state of Puntland successfully made local elections with a one person, one vote system in some districts in recent months.

While all Somali citizens would benefit from the one person, one vote system, minorities might benefit more than most. Currently, the 4,000 clan elders and the 328 MPs are determined solely on the basis of an informally negotiated calculation known as the 4.5 formula. Under this, each of the four major clans in Somalia gets two-ninths of political appointments (including MPs) with the rest of the clan communities (all minorities) benefitting from the remaining one-ninth.

The formula is not based on population numbers—in some areas, minority clan members may well form a majority. Rather, it is a result of power and social status. The 4.5 formula effectively means that minorities are reflected as being half the worth of other communities, reinforcing racism, discrimination, and marginalization. That this experience continues to be accepted electoral practice makes this a case of entrenched structural discrimination which defeats the idea of the equal and inherent dignity of all.

While many jurisdictions have quotas that are intended to increase the representation of marginalized groups (most commonly women, but also in some places religious or caste groups), what is shocking and possibly unique about the (supposedly transitional) system in Somalia is that the most marginalized groups are given a quota which is half of that of the relatively privileged groups in society. A practice which looks to fly in the face of every major international treaty or convention that outlaws discrimination on the grounds of ethnicity, but is sustained in Somalia, nominally due to the ongoing threat of a renewed descent into widespread conflict if the current system is revoked and replaced.

While the unveiling of President Hassan Sheikh Mohamud helps reduce the risk of conflict and may enable effective governance, the hosting of yet another ‘election’ without universal suffrage, that paralyzed the state for 18 months, and was again decided on an openly discriminatory basis (playing into recruitment strategies used by radical groups) is far from ideal.

It is hard at the moment to foresee how change will come. Clearly, a concerted effort by all Somalis in a spirit of pragmatism, in conjunction with renewed support from the international community, remains key in sending clear messages to the new leaders to establish an inclusive and representative form of political decision-making. This is the only guarantee that will ensure Somalia will emerge from chronic instability to a situation where all Somalis irrespective of their clan identity will be able to live in peace and harmony.