Illegal gold exchanges between the global North and South are fuelling violence and exploitation, but most consumers are oblivious.

While the violence and exploitation associated with the illegal diamond trade is now widely known, there is far less global awareness of the violence associated with gold extraction. In 2014, an investigative journalism piece documented the illegal gold exchanges between some South American countries and those in the global North—on the one side Colombia, Bolivia, Peru and Brazil, and on the other Canada, the United States, Switzerland, Falkland Islands, Panama, and several European countries. This report found that not only does illegal gold mining adversely affect a country’s tax revenues, it is also directly related to human trafficking—particularly of children—and the perpetuation of conflict by funding armed groups.

While mining in general creates various problems (e.g., contamination of water sources, displacement of local populations), these problems are magnified when mineral extraction is done outside the legal regulatory framework. At this point it is necessary to make a distinction between illegal and informal mining because these tend to be confused.  The first cannot be formalized due to certain characteristics (for instance, it violates environmental laws or has unsafe labour conditions) that lead to criminal mining. Informal mining, however, is defined by the lack of legal mining titles and often can be formalized eventually. The problem with illegal mining is that the lack of mining titles facilitates gold trafficking. 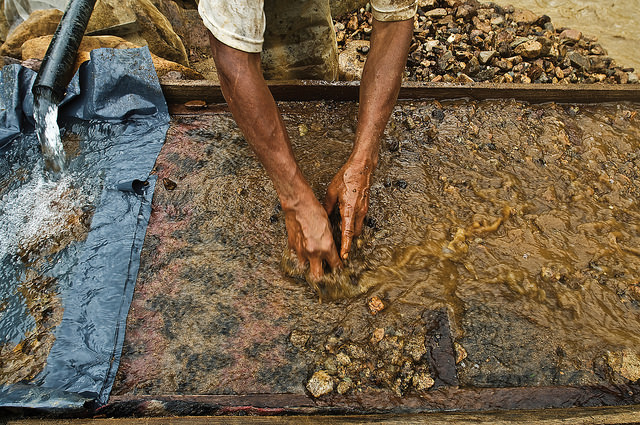 Problems associated with gold mining are magnified when extraction is done outside a legal regulatory framework.

In any case, neither type of mine pays any taxes. These lost tax revenues impede the government’s ability to protect citizens’ human rights—especially economic and social rights—but tracking them down is next to impossible because most illegal and informal gold can be easily mixed with legal gold. Bolivia has determined that in 2011, rather than receiving 30 million dollars for gold mining royalties, the country only received $500,000 (USD). In Brazil in 2012, official gold production was 70 tons, but estimates concluded that illegal production increased this figure to more than 91 tons—a 30% increase that translates into a corresponding loss in tax revenue. Finally, in Peru, illegal gold production is believed to reach 40 tons annually, which would create $257,618,358 (USD) of income tax if such production were legal.

An even more direct violation of rights due to illegal mining is human trafficking. According to the International Labor Organization, in Bolivia and Peru 13,500 and 50,000 children respectively worked in small informal mines in 2005. Moreover, in Peru, approximately 4,500 people were sexually exploited in 2012 around the Madre de Dios region (a region where 97% of mining activities are illegal and/or informal) and 78% of these victims were minors. According to the 2016 Global Initiative Against Transnational Organized Crime, many women and minors are deceived by false employment offers or are recruited by intermediaries who offer them employment in illegal mining camps as cooks, store clerks, or waitresses. Once there, women are forced to provide sexual services in restaurants, bars, or mining camps. Of course, sexual and labor trafficking of people is produced under conditions of extreme labor insecurity, since women, children and miners do not receive labour protections and their remuneration is extremely low.

Clearer legislation that differentiates between types of mining and their impacts is critical.

Compounding this problem is the fact that many armed groups traffic gold to fund their operations. For example, Colombia’s guerrillas and neo-paramilitary groups, or Brazilian drug traffickers, are known to displace people and launder money in gold exploitation zones. This criminal mining also leads to high homicide rates. A study in Colombia found that the rise in international gold prices increases the profitability of illegal mining activities, leading to increases in homicide rates and the number of massacre victims perpetrated by illegal armed groups. Notably, many of these armed groups known to exploit gold are also known to recruit and exploit children.

Conflicts over land are also prevalent. For instance, in Brazil, garimpeiros (small, informal miners) encroach on indigenous lands looking for gold. The garimpeiros have even trespassed into neighboring countries including Bolivia, Peru, Colombia, and Guyana, where violent conflicts have resulted and indigenous leaders have been murdered. The garimperios also coopt indigenous peoples to work in mines, which creates community internal conflicts. On the other hand, land traffickers in Bolivia invade, take possession of and trade lands where the state has already granted use rights, such as forest concessions and primary or plantation forests.

Assuming that a certain amount of mining is necessary to fulfill the needs of the technology sector and other crucial industries, a stronger state presence in the gold sector is imperative, in particular along countries’ borders where illegal mining is concentrated. Clearer legislation that differentiates between types of mining and their impacts is critical, as are stronger regulations to guarantee mining in environmentally and socially sustainable ways. Venezuela, for example, differentiates between informal and illegal mining, and has also prohibited extraction of gold from national parks. And Colombia was one of the first Latin American countries to codify illegal mining as a crime.

Enforceability, however, is another complex problem entirely—especially where armed groups are involved. Let’s take the Colombian case as an example. A journalistic research project documented the close collaboration between some Colombian armed forces and illegal armed groups (especially the ones known as Bacrim or criminal gangs). As a result, although there are laws against illegal mining, which the government is supposed to enforce, it remains untouchable despite several military operations: the police, for instance, take bribes and even impose extortions to let the miners work. In these cases is where funding, advanced training for law enforcement, and more human resources for protecting territories are direly needed.

Local, national and transnational authorities should also strengthen collaboration between countries and create systems—as has been done with diamonds—to track where gold is coming from. When international trading companies conveniently fail to check for proper documentation of the gold’s origin, the final consumer may be purchasing gold produced under unjust and violent circumstances. Finally, consumers themselves must demand stronger regulations and documentation, becoming conscientious about what they buy. People may try to avoid “blood diamonds”, but if they pay no attention to where their gold comes from, they are still supporting the same types of violence and exploitation.

***A version of this piece first appeared on the Dejusticia Global Rights blog.

Natalia Duarte is an adjunct professor at the School of Human Sciences, Rosario University. Previously, she was a researcher at the Center for the Study of Law, Justice and Society (Dejusticia).