The farmer or the hero litigator? Modes of climate litigation in the global South

Climate litigation shows that the global South experience is a rich and powerful one that offers many opportunities for multi-directional learning. 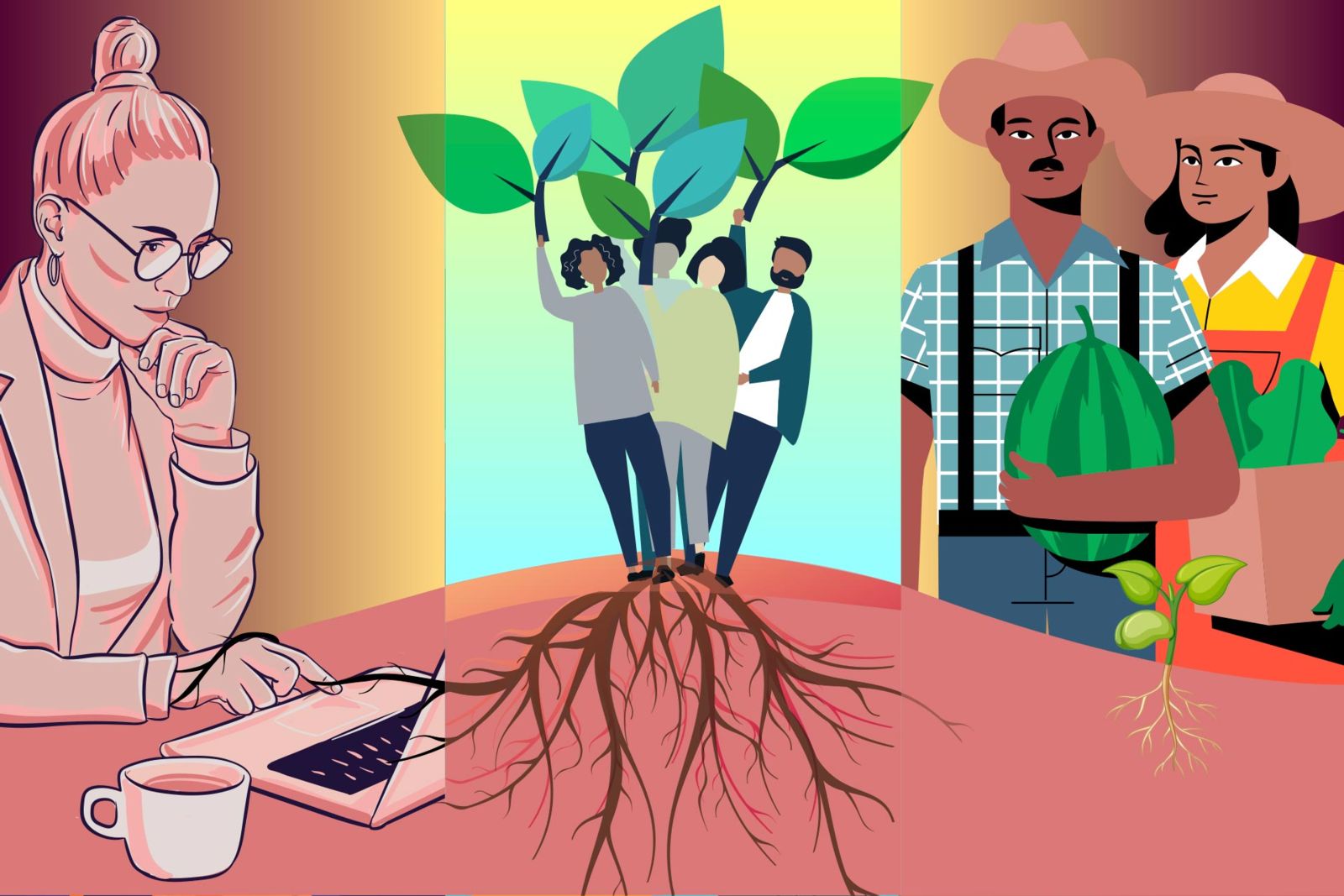 In August 2015, just a few months before the conclusion of the Paris Agreement, a Pakistani farmer, Mr. Ashgar Leghari, filed a petition with the Lahore High Court claiming that the government of Pakistan was violating his fundamental constitutional rights by failing to “address the challenges and to meet the vulnerabilities associated with Climate Change.” In a decision issued a month later, Judge Syed Mansoor Ali Shah ruled in favour of Mr. Leghari’s claim, and shortly after ordered the constitution of a joint expert-government Climate Change Commission to oversee the implementation of the government’s climate policies.

The Leghari case is a prominent example of how a number of courts in the global South are taking bold steps and crafting innovative approaches to compel action on climate change.

However, until recently, the academic and media spotlight largely focused on court actions in the global North. Climate litigation only started to emerge in the global South in the past few years, more than two decades after it emerged in the North.

How does climate litigation arise in the global South? Our article presents a preliminary framework to explain the different, prototypical modes of legal action in the global South and how they are shaped by particular actors, including local activists, global non-profit foundations, and lawyers. In developing this framework, we drew on our earlier survey of climate litigation in the global South, our consultancy work for the Children’s Investment Fund Foundation, as well as our understanding of the litigation pathways that have been undertaken in global North jurisdictions to develop some hypotheses about the modes of action that could emerge in the Global South.

Prototypical modes of climate litigation in the global South 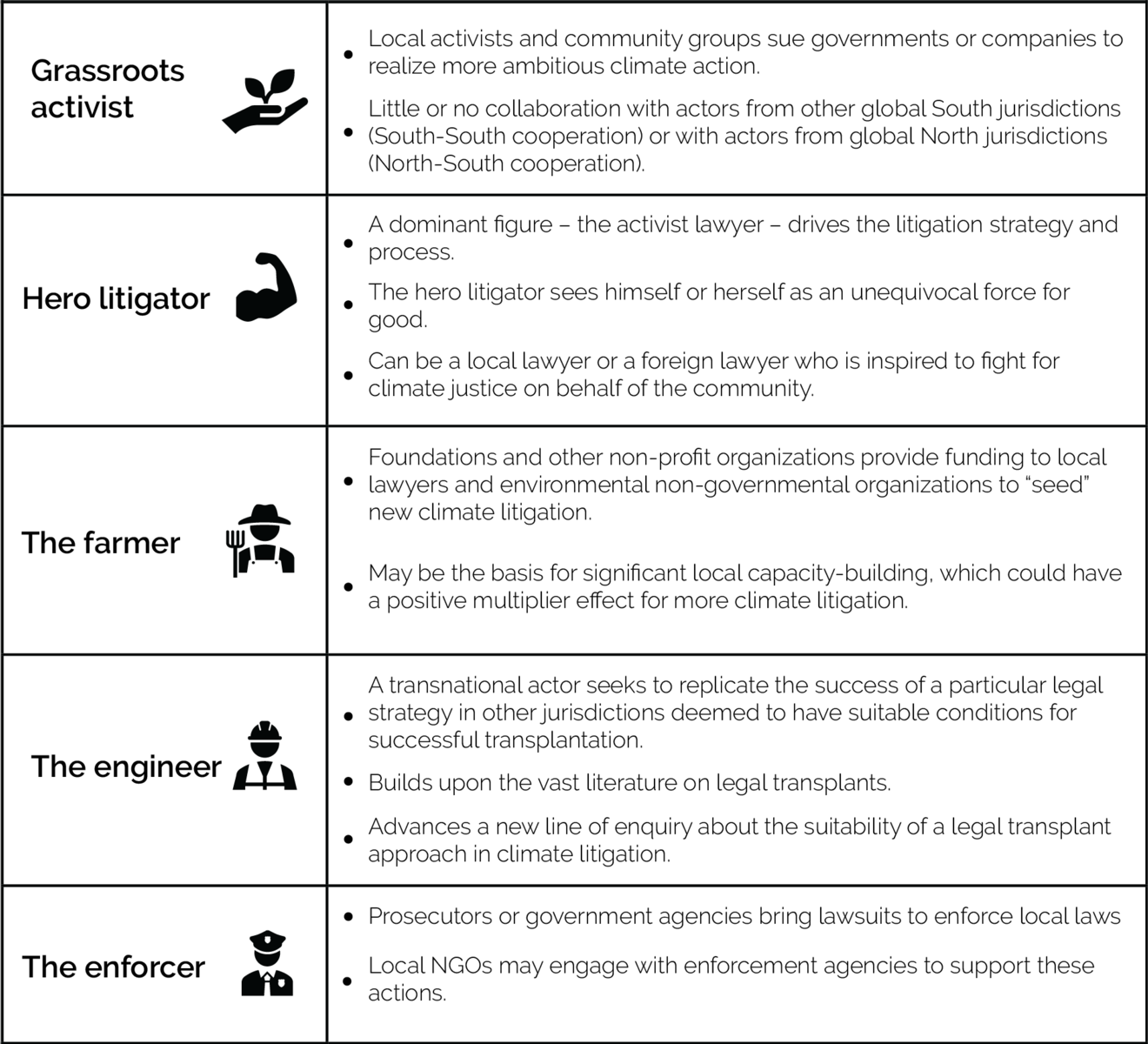 The Grassroots Activist refers to the type of litigation that arguably is most likely to emerge in jurisdictions with a tradition of public interest litigation (PIL) for the protection of environmental and socio-economic rights. In these jurisdictions, such as Pakistan, India, the Philippines and Colombia, PIL is perceived to be a viable route to protect rights, and local activists and communities have pursued it in many environmental claims. It is then an incremental—but crucial—step for local communities and activists to use PIL as a pathway for climate litigation by pressing for enforcement of existing laws and protection of their constitutional rights.

The Hero Litigator is a lawyer-activist who is passionate about the use of litigation and other legal tools to champion for climate justice. She is a dominant figure who has a high-profile role in relation to the litigation, often raising publicity for the case (and climate litigation more broadly), through press conferences and media appearances. The hero litigator drives the litigation strategy and process. As climate litigation develops in the global South, some cases following the Hero Litigator model are likely to emerge. In India, for example, M.C. Mehta is widely celebrated as the country’s environmental champion and there are many environmental lawyers in India today who aspire to follow in his footsteps. It would not be surprising to witness the emergence of a number of hero litigators who seek climate justice, particularly for the most vulnerable and marginalized sectors of Indian society. It is also noteworthy that some international organizations working in the global South seek to cultivate “environmental law champions”.

The Farmer refers to the efforts by foundations and other non-profit organizations to “seed” climate lawsuits in the global South. The Farmer mode of climate litigation in the global South could either take the form of: (a) global North non-profit organizations beginning to expand their programs to fund climate litigation in Global South jurisdictions which are highly vulnerable to the impacts of climate change or which are major greenhouse gas emitters (e.g., Brazil); or (b) broadly-based “soft support” programs. Either route could be the basis for significant local capacity-building, which could have a positive multiplier effect for climate litigation.

In the global North, the Engineer Model is most clearly illustrated by Urgenda, the organization behind the ground-breaking legal victory that has compelled the Dutch government to increase the stringency of its GHG emission reduction targets. Urgenda’s vision has led to similar litigation in Belgium, Germany, Ireland and the UK. The Engineer is typically proactively involved in the transplant efforts (e.g., by actively sharing information about its legal strategy and working with local lawyers in the “target jurisdiction”). There are currently global South cases driven by the Engineer’s mode of action, but a growing interest in global South climate litigation could lead to other transnational actors seeking to replicate successes.

In the Enforcer mode, cases are initiated by prosecutors or law enforcement authorities in a country, sometimes with technical (scientific and legal) support provided by non-governmental organizations. In Brazil and Indonesia, for instance, the plaintiff in the majority of climate litigation cases has been the public prosecutor or a government ministry seeking enforcement of domestic laws. The Enforcer mode could advance climate litigation in the global South, particularly with greater recognition of the link between enforcement of existing environmental and natural resource management laws and climate change.

Jolene Lin is an associate professor of law and director of the Asia Pacific Centre for Environmental Law at the National University of Singapore. She serves as an evaluator for the Children’s Investment Fund Foundation on its investments for a programme on strategic climate litigation in Europe.