Monte Patria in Chile is the first migrant community due to climatic causes in the country—why is it generating so much controversy? 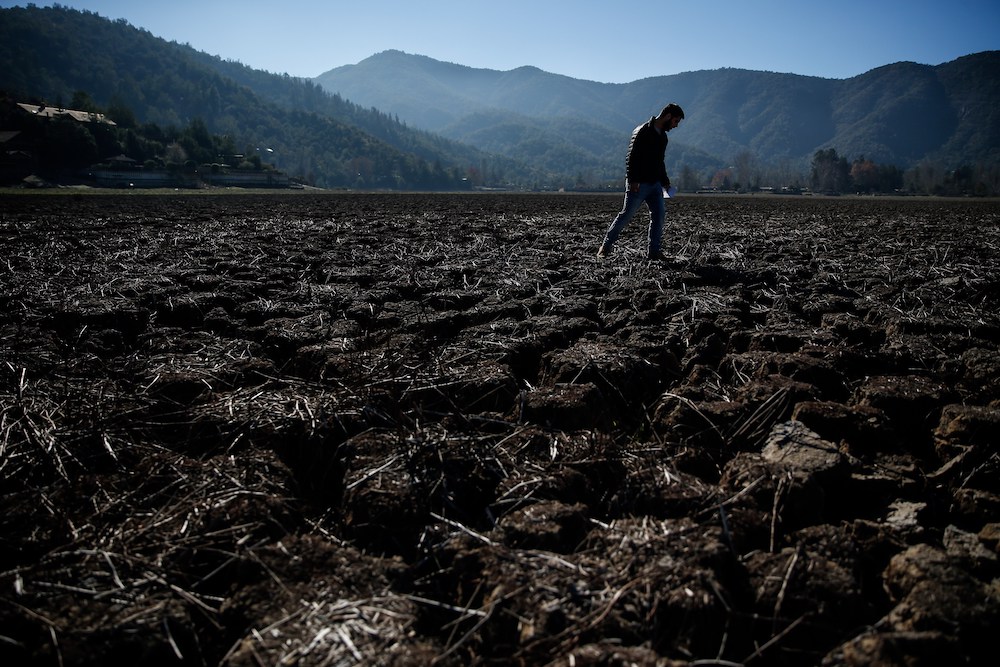 The dried up lake-bed of the Laguna de Aculeo in Chile. Alberto Valdés/EFE.

The impact of climate change, including the progressive effects of the depletion of natural resources and the degradation of ecosystems and extreme environmental events, introduce a new global challenge: the massive migratory flows that will be generated as a result. Considering that these migrants are not yet factored into a specific regime in the international system of human rights protections, this challenge is significant indeed.

Monte Patria is a city located in the Limarí Province of Chile's north-central Coquimbo Region. Agriculture constitutes its main source of income and employment generation. However, the semi-aridity conditions of the territory are intensified by changes in rainfall and extreme temperatures, as well as by a growing process of melting glaciers. These factors are further aggravated by the country's water regime for purposes of human and productive use—which is heavily privatized and restrictive for a large part of the population—as well as by poor policies aimed at solving the water shortage. The government has taken measures to alleviate drought problems by deepening wells, providing water tanks, delivering fodder for livestock, or producing artificial rain by seeding clouds. But this reactive approach is not enough to solve the water shortage problem in the medium and long terms.

Under these conditions, many residents have been driven to migrate to other regions of the country, and Chile’s delay in adopting relevant regional and international agreements is putting these migrants at risk.

Since 2007, the International Organization for Migration (IOM) defines environmental migrants as the “persons or groups of persons who, for compelling reasons of sudden or progressive changes in the environment that adversely affect their lives or living conditions, are obliged to leave their habitual homes, or choose to do so, either temporarily or permanently, and who move either within their country or abroad”. But there is still no globally accepted definition or international agreement on what we understand by “environmental migrant” or on the international protection that these people should be afforded.

One of the main problems in establishing appropriate international protection for environmental migrants is the multi-causal nature of the phenomenon. It is very difficult to demonstrate that the decision to migrate depends only on environmental factors, since in most cases it intersects with other political, social, and economic factors. This makes it difficult to keep a record of people who move due to environmental deterioration. The difficulty in measurement then hampers the production of statistics underlying the formulation of public policies and the demand for proper protection at the international level.

One of the main problems in establishing appropriate international protection for environmental migrants is the multi-causal nature of the phenomenon.

Another problem is the difficulty of identifying those responsible for these displacements and who should provide such protection, considering that the responsibility for the so-called "climate debt" is diffuse and attributable to a large number of states throughout many years.

Nowadays, the international law regimes in place, such as the Convention on the Status of Refugees, International Human Rights Law, or the United Nations Framework Convention on Climate Change (UNFCCC) do not provide proper protection for this group. Nevertheless, significant progress has been made in recent years, with the Paris Agreement, the first international agreement where human mobility is mentioned in relation to climate change, and the Global Compact for Safe, Orderly and Regular Migration, the first global agreement with a common approach to international migration in all its dimensions. This compact includes a specific section for migration movements, such as those that may result from sudden-onset and slow-onset natural disasters, the adverse effects of climate change, environmental degradation, and other precarious situations.

Another important milestone has been the views of the United Nations Human Rights Committee (2020) regarding the asylum application against the effects of climate change submitted by a citizen of Kiribati in New Zealand. The Committee stated that countries cannot, in principle, deport people facing climate change-induced conditions that violate the right to life, and it highlighted the role that the international community must play in helping countries adversely affected by climate change.

These mechanisms, besides imposing binding international obligations upon states (with the exception of the Global Compact), are important in guiding their practice in order to achieve global regulation. This common approach is necessary in terms of obligations on the part of the international community; however, the success of international leadership requires the commitment and political will of all governments. In this context, Chile's position seems contradictory.

Chile is not only a host country for immigrants from the most vulnerable countries; it will also become a potential source of immigrants seeking better living conditions.

First, Chile refused to sign the abovementioned Global Migration Compact. Among the arguments invoked were that national sovereignty would be diminished and that there was a risk of being sued before international courts (despite it not being a binding agreement). Furthermore, the government pointed out that the Pact does not distinguish sufficiently between regular and irregular migration, suggesting that it promotes irregular migration and ignores that the purpose of the pact is to promote the processes of regularization of migrants.

Second, Chile has not signed the Escazú Agreement either. The Regional Agreement on Access to Information, Public Participation and Access to Justice in Environmental Matters in Latin America and the Caribbean, adopted in Escazú, Costa Rica in 2018, was also rejected on national sovereignty grounds.

Such course of action stands in contrast with Chile’s environmental features. Chile meets 7 of the 9 conditions of climate change vulnerability established by the United Nations Framework Convention (art. 4.8). The Chilean economy is sustained by natural resources such as agriculture, forestry and mining; accordingly, climatic and ecosystem conditions are extremely important factors for the development of the country.

Chile’s National Institute of Human Rights (INDH) indicates that there are 117 socio-environmental conflicts in the country (32% of them on indigenous territory), 86% of them affecting the right to live in a pollution-free environment, 45% affecting the right to physical and mental health, and 44% of them being conflicts over water. This adds to the concern of scientists about the vulnerability of the populations of the islands Juan Fernández and Rapa Nui, located in the Pacific Ocean.

Migration as an adaptation strategy could be positive for the development of vulnerable populations. But as the Monte Patria case shows, this requires planning through well-designed policies. Chile does not have a risk policy framework that links extreme weather events, particularly drought, with population displacement, and there are no agencies specialized in public policies related to population, migration, and climate change.

Chile is not only a host country for immigrants from the most vulnerable countries; it will also become a potential source of immigrants seeking better living conditions. The paradox, or perhaps the hypocrisy of the Chilean government, is its lack of acknowledgement of human displacement as a transnational phenomenon that must be addressed multilaterally. In an interdependent world characterized by global phenomena, we need common approaches and joint solutions. Government management so far in Chile demonstrates limited political will and an inappropriate and inconsistent strategy, considering that eventually it will also need the collaboration of other states.

Marianela Garione is a former consultant in the OHCHR Regional Office for South America and current assistant in the Visas section of the Argentine Consulate in Santiago, Chile.