According to Karoline Kamel, the politicization of religion in Egypt is destroying human rights. She concludes that a thoroughly secular strategy is the only hope for a better rights outcome there, and indeed, everywhere. Her description is accurate, but selective, and her conclusion is not warranted.  Kamel is right that religion is currently part of the rights problem in Egypt, but in the long run religion needs to be—and can be—part of the solution.

It is true that there is currently no religion-based mass rights movement in Egypt, but neither is there any meaningful secular-based rights movement. Secular human rights professionals lack a mass base. Typically, they spend their time issuing feckless press releases about what the rights-abusing government of the moment “must” do. Young secular urban protesters could make noise in Tahrir Square but not sustain any coherent political action. Secular organized labor voted in large numbers for the “Nasserite” Presidential candidate, Hamdeen Sabahi, who lost because he could not compromise with the moderate Islamist candidate, Abdel Fotouh. When secular organized labor goes on strike, it is normally for higher pay, not an inclusive progressive political agenda.

In contrast to these secular groups, progressives with one foot squarely in the religious camp seem responsible and more effective. In 2012, I met with faculty at Cairo’s venerable Islamic Al Azhar University, who were far more progressive than Kamel’s passing reference implies. One medical doctor there, Ahmed Ragab, a professor of reproductive health, gets funding from the UN Population Fund to collect data on female genital cutting in Egypt and elsewhere in Muslim Africa. Working with the relatively secular regime of the Mubarak period, he helped set up human rights-oriented women’s health clinics in rural Egyptian villages, and writes constructively about the Koran’s teachings on women’s issues. Even some of the Imams at Al Azhar make video tapes that NGOs use to convince Muslim African villagers that the Koran does not endorse female genital cutting.

Similar groups exist on the Coptic side of town. One of the most professional, effective NGOs in Egypt is CEOSS, the Evangelical (not Orthodox) Coptic rights-based humanitarian organization. They stress economically sustainable development projects that are inclusive of women and non-Coptic residents.

As Kamel would be right to point out, Egypt’s religiously polarized political environment harms the work of these religious progressives. For example, CEOSS wants to include Muslim beneficiaries in its development efforts to show that it is inclusive, but it must be careful not to trigger charges of attempted conversion.

If a rights-affirming religious movement emerges in Egypt, it would hardly be the first place. Seventy years ago, the Catholic Church was a bastion of autocracy in Latin America, and no one expected the later emergence of a liberation theology movement that would help pioneer the fight for social justice. Even Muslim societies have hosted progressive religious mass movements. During Indonesia’s recent transition to democracy, the religious conservatives in Aceh grabbed more headlines in the West, but the real story was the linchpin role of Amin Rais’s moderate Islamic party in holding together multi-confessional, progressive governing coalitions based on toleration and democratic compromise.

In these locations, the core of the old authoritarian regime was the military, a secular institution. Popular secular forces on the left were repressed by force, and many secular and religious people in the middle class were co-opted to support the regime. In the Latin American and Indonesian success cases, the mobilization of an alliance between religiously observant poor people and urban democrats helped to break the system of oppression. This alliance was made possible by the rise of progressive grass-roots religious movements, which forced old-school religious institutions to reform themselves to stay competitive in the religious marketplace of ideas.

Can a similar alliance between progressive seculars and the religious poor create a strong mass movement back to rights-based politics in Egypt? Not immediately, for the reasons that Kamel states. Authoritarian regimes in the Middle East, as elsewhere, are adept at the game of divide and rule, playing the ethnic, religious, tribal and gender cards to divide groups with an interest in popular self-government. In particular, dividing urban middle classes from religious peasants, and religious majorities from minorities, is a trick as old as Bismarck.

When potentially progressive working classes fall for this trick, they wind up with politically tame, ineffectual labor movements that can keep their small subsidies only if they continue to support the military regime. Lacking broader mass ties through an inclusive mass movement or catchall political party, progressive politics are stunted. This happened similarly in Latin America and North Africa. 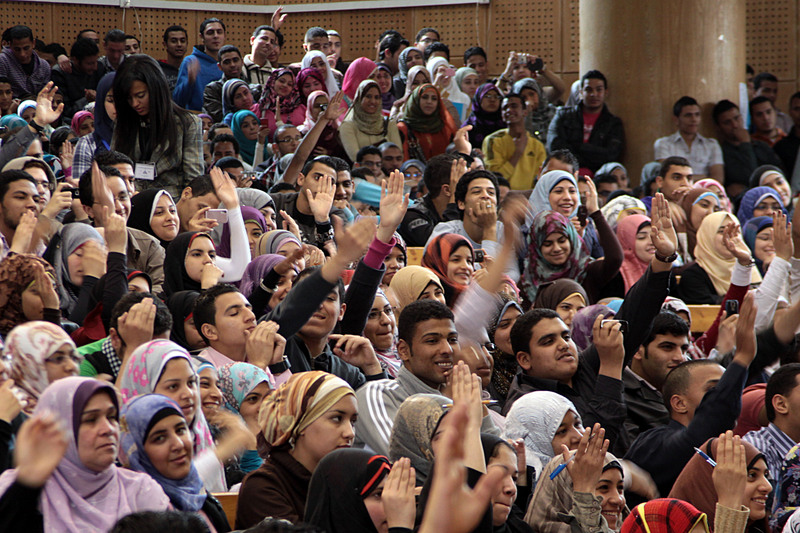 Hundreds of Egyptian students attend a religious lecture at Ain Shams University in Cairo regarding the political role of Egyptian youth.

A better model is a more easy-going and widespread brand of secularism: the secular state successfully encourages tolerance by religious organizations; in return, the state itself tolerates a modulated role for religion in the public sphere.

The question is how to broaden and organize the progressive base in poor countries with extensive illiteracy and entrenched religious institutions that are unfriendly to liberal rights rhetoric. Completely secular parties of workers, peasants, and/or poor people are possible in some settings. But even in places that seem most suited for purely secular politics, such as much of Europe, inclusive Christian parties played a substantial role in the transition to moderate, democratic stability. And where such parties were lacking, as in revolutionary France and Kemalist Turkey, far bloodier and more divisive struggles were required in order to achieve the anticlerical style of secular law towards which Kamel leans. A better model is the more easy-going and widespread brand of secularism found in such diverse locales as the US and Indonesia. In these and other cases, the secular state successfully encourages tolerance by religious organizations. In return, the state itself tolerates a modulated role for religion in the public sphere.

Parties and social movements that draw on religious roots have enjoyed particularly significant advantages in developing countries that are not yet fully democratized. In such countries, fully secularized constituencies are usually few and far between. Social networks and local institutions that can sustain the mobilization of masses of people into politics are predominantly religious or ethnic. Compared to ethnic networks, the world’s main religions of personal salvation often have ideologies that include concepts of justice, equality and broad public welfare. While these religious doctrines also have elements that can be exploited for exclusion and oppression, the discursive elements for a more progressive politics are there to be used.

Shunning religion as a potential partner in Egypt’s rights movement risks condemning rights to the boutique status of an urban elite preoccupation. In a country like Egypt, rights can only gain traction if a principled mass movement supports them, and that means that any major rights-promoting movement will need a religious leg to stand on.