In 2010, organizations in Israel working for Palestinian human rights held few illusions about Israeli public opinion. The vitriol coming from Israeli society towards these groups was rivaled only by the contempt Israeli Jews expressed towards Palestinians themselves.

A decade that had included the Second Intifada, waves of violence against Israeli civilians and a 2006 war with Lebanon had left Israelis despairing of peace. The Jewish public became even more traumatized and hostile towards Palestinians, viewing local human rights organizations as subversive.

Then, in late 2008, Israel’s war in Gaza (termed “Cast Lead”) led to a UN commission headed by Justice Richard Goldstone, investigating possible war crimes. The Israeli government refused to cooperate with the commission, but local rights NGOs supplied information, bringing Jewish Israeli feelings about these groups to a new low.

Throughout this troubled decade, some human rights workers had essentially given up finding favor in the Israeli public eye.

Throughout this troubled decade, some human rights workers had essentially given up finding favor in the Israeli public eye. Instead, they embraced legal strategies and turned to the international community, hoping outside pressure would change Israel’s policies. But by the time they came to me in late 2010, some had come to recognize what Jeong-Woo Koo, Rachel Krys, Kevin Nix and others in this openGlobalRights debate have already noted: public opinion is relevant for human rights change.

The fallout from the Goldstone report was not just unpleasant. A right-wing bully-group ran a crude public campaign explicitly targeting the human rights groups’ main funder, the New Israel Fund, and a sitting Foreign Minister called these groups “accomplices to terror”. Right-wing legislators designed initiatives to limit the activity of left-leaning and human rights NGOs, and a version of that bill is pending in Israel’s parliament today. Op-eds and Internet commenters spewed rage and demanded that the government ban Israeli rights groups.

Ten Israeli organizations working for Palestinian rights came together to trade ideas, and with a designated grant, contracted me to lead a year-long process of developing strategies to boost their efficacy in Israeli society. Initially, formal public opinion research was not on the agenda.

Each group had its own perspective and organizational mission, and while all shared the cause of defending Palestinian rights violated by the Israeli occupation (for some, this was only one of their areas of activity), their approaches, values and other activities differed.

The human rights groups wanted to address a range of issues. One felt the biggest problem was that no legislators were “pulling for us” in the Israeli parliament. Another worried that human rights workers were becoming isolated in their own “echo-chamber”, and wished to “talk with a larger group” and “expand the circle to other civil society organizations under attack.” A general prevailing fear was that the authorities, in concert with the public environment, would increasingly shut them out.

Others were concerned about engaging directly with the general public. They worried that this would lead to “pandering” to the prevailing hardline atmosphere. There was a commonly held opinion that no matter what defenders of Palestinian human rights say or do, the public would always hate them. Given this, why compromise the message? Similarly, some NGOs felt that radical voices should stay that way so as to help push the discourse incrementally and serve as a counterweight to the far right.

But others envisioned a more positive form of public engagement, including messages that explained why human rights activism is essential for democracy. Perhaps they could tone down negative criticism of Israeli policy while highlighting the importance of respecting the rights of Palestinians affected by that policy.

Although not a goal at the outset, towards the end of the year of working together, most of the participating groups decided that systematic public opinion research would be helpful.

We began the project by inviting mainstream opinion leaders such as members of leading think tanks, former military figures and journalists to speak frankly with our group in a two-day closed conference, away from the media and the accompanying posturing.

We also recruited a focus group of ordinary Israeli Jewish citizens, led by a professional moderator. The human rights workers sat just outside the circle and observed without intervening. Although methodologically unconventional, the focus group participants soon spoke freely. The distance between the HR workers’ views and those of ordinary Israelis struck the observers continuously. Surrounded as they were by occupation-related hardship, the human rights workers now saw citizens for whom the conflict simply wasn’t a burning topic at all. They were reminded how little information most Israelis know about Palestinian life, and of the complacent perspective that peace is desirable but will simply have to wait. 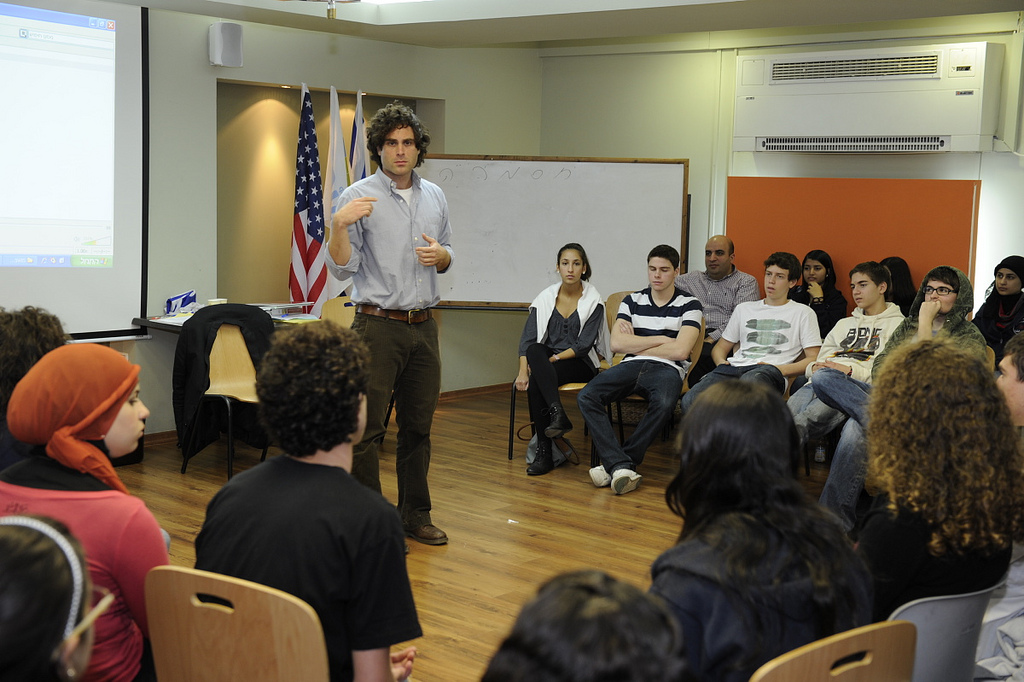 A focus group comprised of Israeli and Palestinian teens meets in Tel Aviv.

For the remainder of the year, I convened the organizations roughly once per month. We often invited guests, including sympathetic figures that could offer advice on concrete tools such as social media, as well as some critical or even hostile figures so the participants could better understand the points of disagreement.

Towards the end of the process we had developed a number of key ideas and messages. They included moral arguments for human rights, cost-benefit approaches, arguments based on Israel’s democracy, and those based on international law. Other ideas involved identifying   when NGO communications might offend ordinary Israelis, and the possibility that dry factual information could be more effective than moral outrage. Some participants considered certain messages to be trade-offs, or diluting of the tough criticism they felt was needed.

For the focus groups, we recruited people who might be supportive of human rights NGOs working for Palestinian rights, but were not in practice. The first group came from the self-defined political “center-left”, while the second included people from the political center.

Notably, the center-left focus group was more supportive of human rights NGOs and related values. In a later focus group with one of the HR organizations, we recruited people with  a legal background, but those participants did not appear any more concerned with equality among Palestinians and Israelis before the law, or equal rights, because of this training. Instead, their initial political orientation seemed to shape their views, which they sometimes justified with legal arguments. The center-defined group displayed attitudes much closer to the mainstream national narrative, and had only limited interest or sympathy for the human rights of the people Israel rules.

Based on lessons learned from the focus groups, we wrote a survey asking people to respond to different types of human rights messages. We also asked about attitudes towards mainstream political figures, human rights in general, and broad themes related to the Israeli-Palestinian conflict.

The results helped identify committed supporters of the human rights NGO community supporting Palestinians, mostly the self-defined but limited left wing, and also opponents and more resistant populations, such as political right-wingers, the highly religious, and immigrants from the former Soviet Union. They also revealed some unexpected opportunities, including an openness to certain human rights messages from significant portions of the self-defined political center and right—of Jewish Israeli society.

Among these insights, we found that the broad notion of human rights is widely accepted even among the right. A majority even on the right felt that an acknowledgment of complex situations, possible mistakes and a statement of intention to provide objective, professional information raised the credibility of the organizations they judged so harshly. Similarly, messages observing that Palestinians also violate human rights—of Palestinians themselves as well as of Israelis—reflected well on the organizations, including among large portions of the tougher target groups

The findings highlighted that the public is not a wall—it is made up of real people whose attitudes are flexible and responsive to changes. In that sense, numbers can actually be humanizing. Other data highlighted one of the key problems in the public eye: the perception that the NGOs were one-sided, over-simplifying the situation, or even arrogant. But reassuring messages that human rights need not conflict with Israeli or Jewish identity—that they could even strengthen it—were also found to have a positive impact.

Translating these insights into changes is a complex process. Overall, the tough environment continues and it is unlikely that hostile attitudes have changed much since the survey took place four years ago. At least the organizations have additional tools, and some have found ongoing need for them: over the years, certain groups have conducted follow-up projects and requested additional survey presentations or facilitations of strategy sessions as individual organizations.

Recognizing the importance of public opinion was one small but important step. The long-term challenges remain.