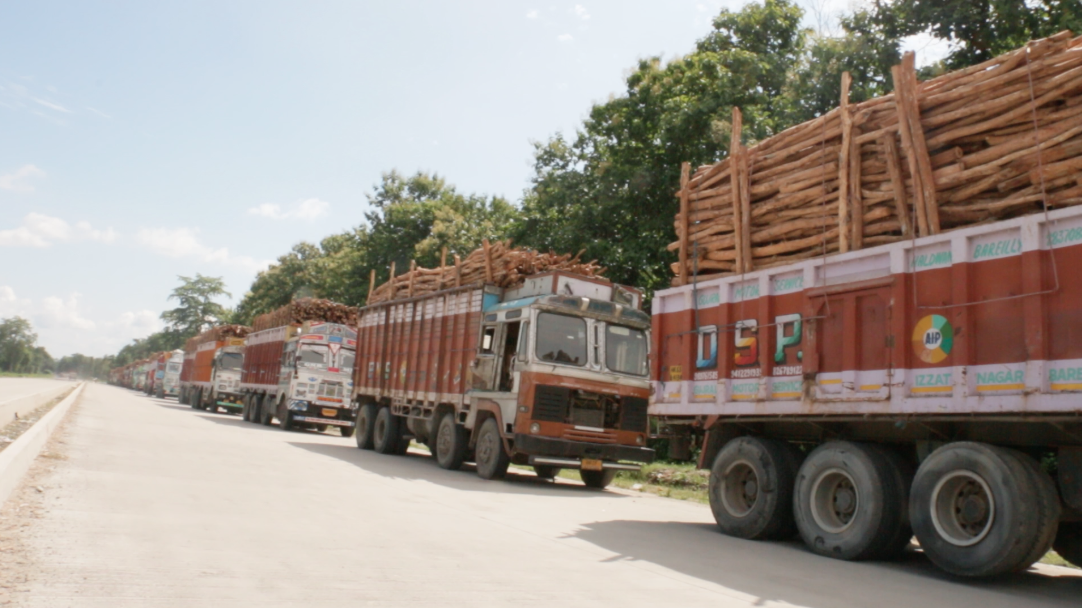 The roads leading to the mill lined with trucks full of trees ready to be pulped for the paper mill. Photo courtesy of Tarini Manchanda

As Covid-19 shakes the world, it has become increasingly clear that disease is an impediment to human life, and there must be an end to the actions that endanger communities and entire ecosystems.

On the Indian foothills of the Himalayas, the Ghoda Nala stream flows through a small town called Lal Kuan. The forests of the region provide the raw materials for a 35-year-old paper mill nestled in the middle of the town, which spews pollution into the air and dumps effluents into the stream’s water.

Around the mill are its residential beneficiaries, employees and those who work inside the mill. Further away from the mill, the economic condition of the population varies— there are middle and higher income farmers, government and private professionals, and land owners. But along the wall of the mill is where the most destitute live with no running water or amenities—it is also this group that depends on the mill for daily wage work.

During a discussion about the local pollution problem, many of these diverse community members congregate at the local school where they complain of water contamination, air pollution, flying soot, groundwater contamination and a range of troubles that stem from industrial neglect. The ones who live by the mill wall show swollen limbs and they speak of sudden deaths and a diminished sense of well-being. Everyone suffers from pollution irrespective of class or economic benefit, but some bear a greater burden since they have access to meagre amenities.

Pollution was once seen as a sign of development in smaller towns because it signalled economic growth but now, it is increasingly being recognized as the cause of increasing health concerns for local communities. Indeed, despite the growing concerns and threats of environmental contamination, industrialists appear inaccessible and unable to follow environmental norms and legislation in the region.

In 2016, an environmental activist filed a case against the mill to raise awareness of the government’s negligence around environmental laws, resulting in the constitution of a committee to ensure their implementation. According to local activists, little was done to follow up on the case. Following this case, there have been two confirmed local deaths caused by the disease jaundice. Although it is a disease of the liver caused by the prevalence of Hepatitis E, jaundice is popularly considered water borne, as it is usually prevalent in areas with contaminated or sewage water. Mill water is heavily contaminated since paper mills are considered among the 20 highest polluting industries, the contaminants in these are complex and require numerous treatments, all of which may still not ensure that the wastewater has been rendered harmless.

Hema Deval, a farmer from Bindu Khatta, an agricultural village near the paper mill, lost her daughter to jaundice, as she exclaims:

As the cases of neglect by the mill grow, despite attempts towards justice over the years, the responses from inside the mill have been dismissive. On the other contrary, locals have found that living in a toxic environment attracts businesses who sell them water filtration systems as a solution to the larger ecological problems. The irony of this situation does not escape Hema who is sandwiched between a contaminating industry and another who wants to profit off her vulnerability. Hema is not only worried about the quality of her water, and dismisses the insensitivity of the proposed technologies. She cannot fathom how a mere water filtration system will restore the balance of nature for her cows, the water table, or her peace of mind.

Many families continue to live along the stinking Ghoda Nala while green plants develop dark spots, children fall sick, and farmers complain of reduced crop productivity, even suspecting that the metallic electrical poles are corroded by air pollution from the mill. Neglect and denial from the industry has become a way of life as people start to treat the stream like a drain and dump dead animals into it, forcing some residents to move away. The paper mill is dumping effluents that are used to treat paper directly into freshwater, with little concern for their impacts on the local ecology. Furthermore, directions by the National Green Tribunal (NGT) are seen as an impediment to the mill’s business. The NGT directed the mill to pay compensation for the pollution instead of paying attention to the dire need for a clean up. The system is not set up to resolve the problem of pollution, instead it functions on a set of payoffs that only encourage a tussle, instead of leading to solutions to the problem of contamination.

While some Indian environmental NGOS and States argue that the Global North must bear the burden of environmental responsibility as the Global South “develops,” they do not consider the huge cost of development. Hema’s lifestyle as a dairy farmer is based on living off the land. To her, development need not mean industrial development, but a clean and safe environment for her children and herself. Despite this, the paper mill industry appears to regard her existence as a mere inconvenience. Instead of allowing Hema to thrive and move towards prosperity within an ecologically sustainable way of life, the local filtration companies and paper mill see this as an opportunity to sell their products and treat the community as a source of profit ignoring her dire circumstances in their quest for larger economic goals in the paper industry.

Hema needs to protect her children and animals from ecological collapse, her stance is her basic right to life.

“We want to live safe lives, and this is how we want to live. We don’t just care for ourselves, we care for the animals,” she said.

A promotional video released by Century Paper Mills advertises the expenses incurred to build a recycling plant for the mill, which include a water purifying unit, meanwhile, members of the Paryavaran Sarakshan Samiti (Environmental Protection Group) attest to the fact that contaminated water from the mill gushes into the fields and forested area unchecked, even though levels have varied over the Covid-19 related lockdown period. A visit to the Ghoda Nala in 2019 revealed contamination that was evident to the eye, but there is an absence of reports or data to prove the effects of visible contamination, and the damage of neglectful systems is stark. The roads leading to the mill are lined with trucks full of trees ready to be pulped for the paper mill, and deforestation is potentially affecting the water table. The mill is free to extract and contaminate without regulation. On the contrary, any efforts to address these concerns for clean air and water by the local groups are either brushed aside or even treated as a confrontation by the CEOs and Mill authorities who refuse to take action to treat effluents.

The system is not set up to resolve the problem of pollution, instead it functions on a set of payoffs that only encourage a tussle, instead of leading to solutions to the problem of contamination.

People living around the mill in the town of Lal Kuan banded together along with environmental activists to address these issues in 2018 and 2019. In an unusual act of sorority, they delivered Rakhis to the CEOs of the mill. Traditionally, a Rakhi is the symbol of a sister's care for her brother and the brother's protection of the sister. If the CEOs of Century Paper Mill consider this simple act, the community is politely demanding that the industry take responsibility. Unlike many, the community living around the plant cannot afford to buy their way out of the consequences of contamination, nor do they see benefits from market-based solutions.

The levels of desperation in the community of people living along the mill are evident and dire. Whether they live in makeshift homes, on top of a dirty water canal, or in fields irrigated by the contaminated water, they all face the effects of the pollution, but neither the young law student nor his farmer father who worry about climate change can find a listening ear for their civic concerns.

Although a committee including the local SDM was set up to inspect the plant and its surrounding effects before the Covid lockdown in March 2020, no action has been taken since the lockdown eased up. Anand Gopal Bisht, one of the many individuals who is concerned and locally active, points out that during the lockdown, 10% of the original level of effluents leaked into local water bodies, but once they resumed complete operations, the water remained polluted.

In this environment, where the international paper market dictates not only the price of the parchment and toilet paper sold by Century Paper Mills, but also the quality of life for people living around the mill, Hema Doval presents a simple and compelling narrative. She reveals the deep rot in the system that connects everyone; she lost her daughter, animals, and a way of life to the pollution. She knows that she isn’t the only one suffering the consequences of contaminated soil and water.

Environmental contamination and injustice remains a lacunae in India’s vision of development. Potential redress routes are inefficient, recycling units appear to be mere PR tools, all the while communities scramble to fit into a market-oriented way of life.

The community around the mill is not asking for much, but in the face of a neglectful, profit-driven industry, even a safe and secure life, reliable employment, clean water and unpolluted air are bold demands.