The limits placed on child benefits in Serbia and the UK have a similarly destructive impact on household incomes and children’s well-being. 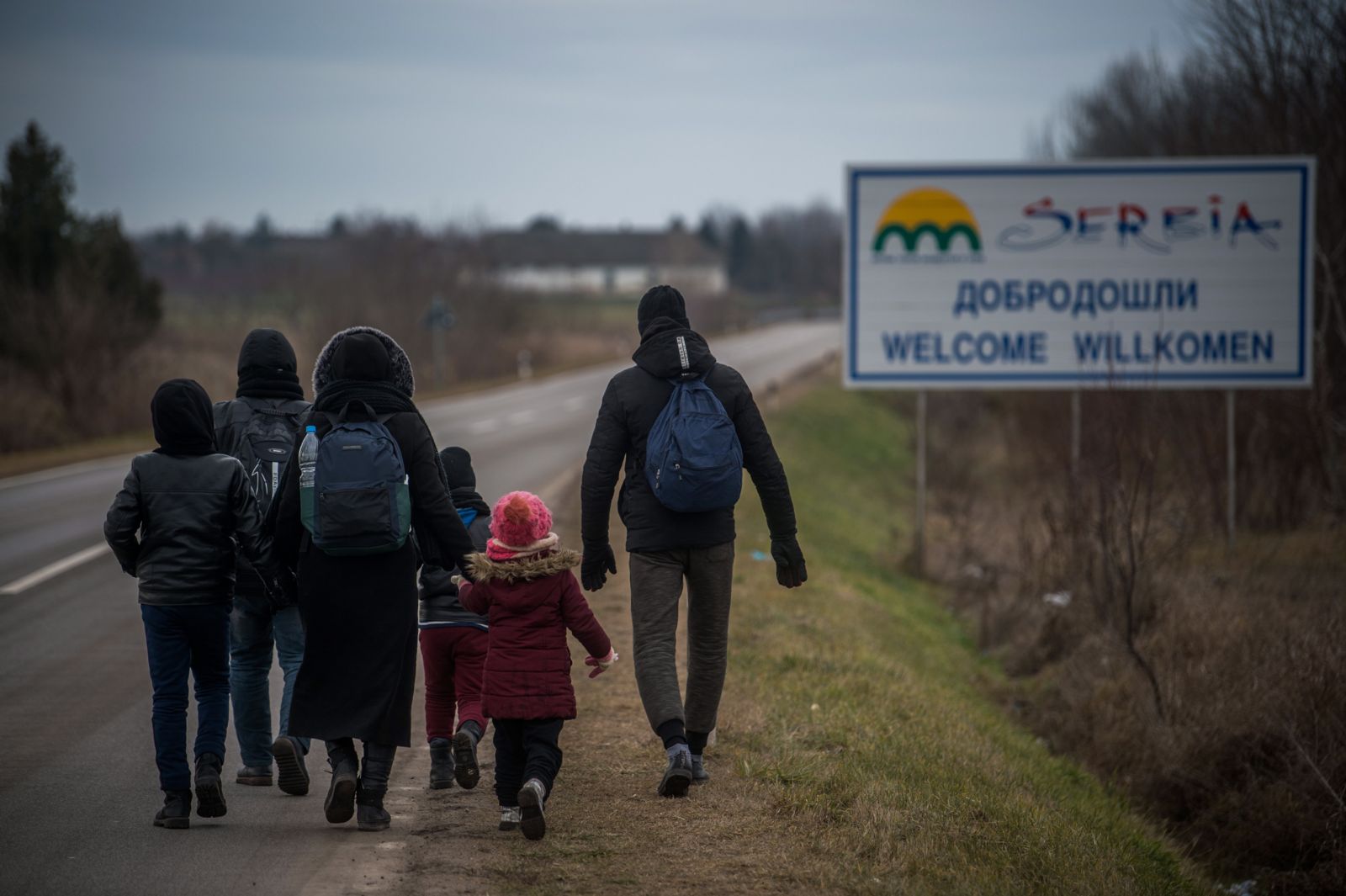 A migrant family walks along a road by the Serbian village of Horgos bordering Hungary in January 2020. EFE/EPA/Zoltan Balogh

Across most Council of Europe states, social support payments for families are scaled by size. The UK and Serbia, however, are outliers: both have policies that place upper limits on per-child payments. This means that parents and carers do not receive full financial support for children above a set number, regardless of how great their need. Restrictions of this kind are clearly a human rights issue, as such policies not only trap families in poverty and deny children their right to social security, but in practice are discriminatory against certain groups.

In Serbia, limiting the number of children eligible for a range of social benefits is a long-standing practice. Until the early 2000s, families were able to receive social support benefits for up to three children. In the ensuing years, on the understanding that the government had a mandate to take steps to stop depopulation, the limit was raised to four children. This restriction is enshrined in several pieces of legislation, from the highly contested Law on Financial Support to the Family with Children and the Law on Social Protection, to the Law on Asylum and Temporary Protection.

According to Serbia’s Statistical Office, more than half of the nation’s families have just one child; in contrast, just 5246 Serbian families have five or more children. The Serbian policy limit of four children leaves this small percentage out from social welfare, but those families are some of the most vulnerable in the country. Most such families are already socially vulnerable, and are led by adults without regular income, and who are instead dependent on odd jobs and social benefits. Such benefit caps only serve to push them deeper into poverty.

In the UK, the policy of limiting child benefits came into force in April 2017 and was introduced as part of austerity-justified changes to the welfare system. This means that for families with more than two children born after 2017, the child element in universal credit and tax credits is restricted to the first two children. As of April 2020, there were 846,000 UK households with three or more children that were claiming either Child Tax Credit or Universal Credit. Out of this total, 243,000 households included children born after 2017, which meant that they were not receiving support for one or more child. Job losses and reduced hours in the wake of COVID-19 mean that tens of thousands more families in the UK are set to be affected by these restrictions.

Once a child is born, there is little a family can do to mitigate the impact of restrictions on benefits, apart from somehow achieving an increase in earnings that is substantial enough to offset increased childcare costs and a likely loss in benefits when the income threshold is exceeded – or by putting the child into care, or otherwise splitting up the family. Two of these three options are violations of the right to respect for private and family life.

While they are not identical, the limits placed on child benefits in Serbia and the UK have a similar impact on household incomes and children’s well-being. According to a May 2020 report,  the projected rise in child poverty in the UK will be predominantly amongst larger families. The report also states that the two-child limit on benefits is  “the main driver of rising child poverty over the next few years”.

In the UK, many of the families disproportionately impacted by the two-child limit are Muslim and Jewish; many are members of the Pakistani, Bangladeshi and Gypsy, Roma and Traveller, and Northern Irish communities. In Serbia, it is poor families from Roma and Muslim communities, as well from rural and impoverished parts of the country, that have been disproportionately impacted. Astonishingly, what challenges there have been to Serbia’s policy have not cited anti-discrimination legislation; instead, it has merely been mentioned in passing as one of the issues tabled in current discussions on reforming the social benefits system.

Both Serbia and the UK are signatories to international human rights accords that uphold and protect the rights of children and of families to an adequate standard of living and to social security. In their failure to eradicate poverty, the Serbian and UK governments have neglected to take into account the provisions of treaties that commit them, as signatories, to a welfare state that respects human rights.

The austerity-driven policies are still preventing thousands of people from enjoying their guaranteed social rights in both countries.

UN experts, as well as the Committee on Economic Social and Cultural Rights, have repeatedly drawn attention to the ways in which the UK and Serbian social security systems are not human rights compliant, and have made recommendations as to how these failings should be addressed. Despite this, both governments have consistently failed to introduce the recommended changes.

What, then, is next for families in the UK and in Serbia who are affected by these policies? Hopes are scant that Serbia’s discriminatory policy will be overturned in the near future, given a political climate in which social policy has been shaped by the government’s ongoing commitment to austerity, even before a looming crisis in the wake of COVID-19 is taken into account. The decrease in public expenditure for social protection from 16.3% to 14.5% of Serbia’s budget in five years underscores this point. In the UK, there is somewhat more cause for hope: in October 2020, the Supreme Court was asked to rule on whether the two-child limit is incompatible with the European Convention on Human Rights. If the government policy is overturned in the wake of such a ruling, it would not be the first time: in the United States, similar policies were removed when a number of states abolished welfare family caps.

Both Serbia and the UK have shown that even a relatively developed social security system can quickly turn into its negation. The austerity-driven policies are still preventing thousands of people from enjoying their guaranteed social rights in both countries. The affected families still have to go to the courts to seek access to the rights that were denied them. However, their struggle provides the hope that, with a human rights-based social security system in mind, the judiciary could provide the redress and find these policies as not compliant with the European Convention on Human Rights and other human rights instruments. The implications of these decisions would not be considered victories only in the UK or Serbia. It would remind us what exactly is in the best interest of the child, how the austerity-led arbitrary criteria thwart poverty reduction policies, and what the operationalisation of the non-discrimination guarantees in social policies looks like.

Danilo Curcic is programme coordinator of the A 11 Initiative for Economic and Social Rights, a Serbian NGO that works to advance the economic and social rights of the most vulnerable individuals, and an Atlantic Fellow for Social and Economic Equity at the London School of Economics.