For countries in democratic transition, using public opinion research to inform the strategy of social movements has added value. 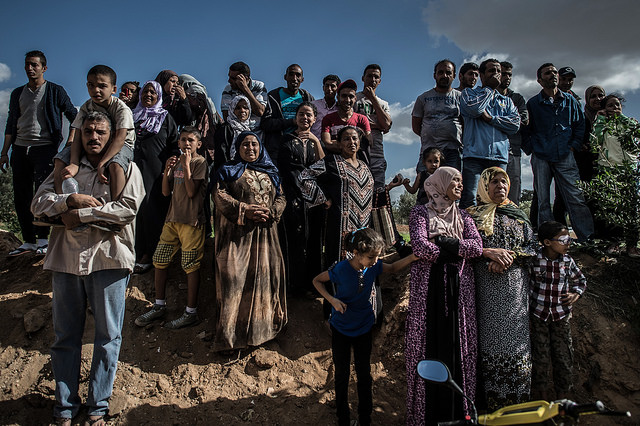 In Tunisia, public opinion research connects the work of organizations with the attitudes and concerns of citizens in new ways.

As Frederick Douglass said, “power concedes nothing without demand.” Widespread social change that promotes human dignity and protects basic rights requires organizing and collective action. Movements often play a central role in advancing these types of changes. Movements bring together different groups and individuals to pursue a common agenda through a series of coordinated actions. These processes, however, are always iterative and require regular reflection and adjustments as the campaign unfolds.

Assisting movements is one way that The National Democratic Institute (NDI) has contributed to democratic transitions in many countries around the world. NDI’s assistance is usually focused on helping the movements become politically skilled and informed so that they can undertake strategic campaigns to affect positive change. To this end, movements need to understand underlying power dynamics, interests and incentive structures. They also need information about how the public perceives their issue or cause and where they might find support and resistance.

Although public opinion research can make a valuable contribution to movement organizing, it is a relatively untested technique in many new and emerging democracies. In many cases where NDI has helped introduce research, it has been the first time local partners have had access to reliable or nuanced data on their given issue. In Tunisia, NDI conducted focus group research on citizens’ attitudes towards the political transition immediately following the overthrow of President Zine El Abidine Ben Ali. Since public opinion research on political attitudes was prohibited under Ben Ali’s rule, the information gleaned was unprecedented. Following the research, NDI partnered with local civil society organizations to hold roundtables throughout the country where political party leaders and civic activists could discuss the findings together. Discussions about the data enabled the activists to refer to real-life examples and build their credibility; meanwhile, it set the stage for a more collaborative relationship with political leaders.

Elsewhere, NDI has helped introduce the use of polling data to local partners in order to develop a targeted messaging strategy. With NDI’s guidance, a coalition of civic groups in Ukraine analyzed public opinion to craft language for their advocacy campaign to protect the right to freedom of assembly. Using information extracted from polling, the coalition determined that language about the “right to peaceful protest” resonated most strongly with citizens, and used this messaging as part of their campaign to attract long-term supporters. Through this partnership, NDI transferred skills to the coalition to enable them to conduct similar research in the future. In both examples, NDI helped groups integrate research lessons into their broader campaign strategy, recognizing that public opinion analysis is not a substitute for other organizing techniques, which include building a base constituency, identifying allies and opponents and promoting various policy solutions.

Public opinion shapes, and is shaped by, the overall political environment.

Of the many tools that movements may use during their campaigns, public opinion research can be useful for informing the strategic approach and making evidence-based tactical decisions. Public opinion shapes, and is shaped by, the overall political environment. Groups can utilize research at the very beginning of a campaign to inform planning, at mid-points to assess their progress, or at other times when there is a need to make adjustments and focus efforts.

As others have noted throughout this debate, public opinion can matter a great deal because knowing where the public stands on your issue is often the first step in crafting a compelling messaging or advocacy strategy. This can be true even when the public is not your ultimate target. Elected officials, for example, often take action based on their constituent’s attitudes and the votes they think they will lose or gain. Decision makers who do not stand for election can also be receptive to significant public opinion. For example, during the successful fight for marriage equality in the United States, strategists focused on moving public sentiment towards greater acceptance of LGBTI rights. The results demonstrated a shift in public opinion; strategists understood that if the national conversation shifted enough, the judiciary with ultimate authority over the issue would have to take note.

With proper sampling and analysis, this type of quantitative method allows movements to generate statistically relevant results and make predictions about the general public’s attitudes—critical when your campaign strategy relies on moving public opinion. Alternatively, collecting opinions from a certain subset of the population might be more strategic. In these cases, smaller surveys or qualitative methods, like focus groups and key-informant interviews, may be more useful. At times, a combination of both quantitative and qualitative research will yield the most helpful results.  For example, following the recent political crisis in Kosovo, NDI conducted a national survey on citizen attitudes towards political leaders, governing institutions, and social issues like inter-ethnic relations. This was followed three months later by focus group discussions to develop a more nuanced understanding of the results.

Finally, there is an additional significance that asking people their opinion has on existing power relations and political space; this is true everywhere, but can be particularly significant during times of democratic transition or consolidation. The very act of conducting public opinion research reinforces to citizens that their ideas matter and creates a space for them to exercise their political voice. It can also create an opportunity for individual and collective reflection on any given issue which might not have occurred otherwise, and which can have impacts beyond the scope of the research itself. When movements survey the people whose interests they aim to represent, those contributions can inform strategy, but the asking itself also signals a commitment to the movement’s constituents, which builds its strength and credibility.

Public opinion research therefore helps movements develop their power not only in terms of how they utilize results, but also how they use the process to reinforce the public’s democratic roles and responsibilities. Each is significant for helping movements change the status quo and realize transformative change.

Lauren Kitz is a Program Officer for Citizen Participation at The National Democratic Institute, where her work focuses on the political inclusion of marginalized populations.