Since 2000, President Vladimir Putin’s regime has rolled back many of the civic freedoms Russians received in the 1990s after seven decades of Communist rule. The government has intimidated and demonized dissenters, and brought most of press under its control. The authorities have relentlessly pressured activists and NGOs that promote human rights, using both legislative and extra-legal measures.

The Russian public appears at best indifferent toward human rights NGOs and their causes.

After years of harassing these organizations with cumbersome accounting procedures and audits, the Russian government now requires them to self-identify as “foreign agents” if they receive foreign financial support. Since Russia’s aggressive actions toward Ukraine in 2014, the pressure on human rights NGOs has only increased, as officials and pro-Kremlin activists smear them as a “fifth column” of traitors doing the bidding of malevolent Western powers.

Perhaps most troubling, despite over two decades of efforts to cultivate a Russian human rights culture, the Russian public appears at best indifferent toward human rights NGOs and their causes. The two signature trends in Russian public opinion since the Crimean annexation have been surging popular support for Putin, and rampant hostility toward the West (especially the United States).

However, support for Putin and anti-Westernism are not necessarily tantamount to wholesale endorsement of Putinism. A deeper look at long-term trends in Russian public support for human rights norms and comparative data on Russians’ attitudes toward foreign funding of NGOs reveals a more complex picture. While hardly sunny, the picture offers more grounds for optimism than media accounts of widespread pro-Putin, anti-Western views. 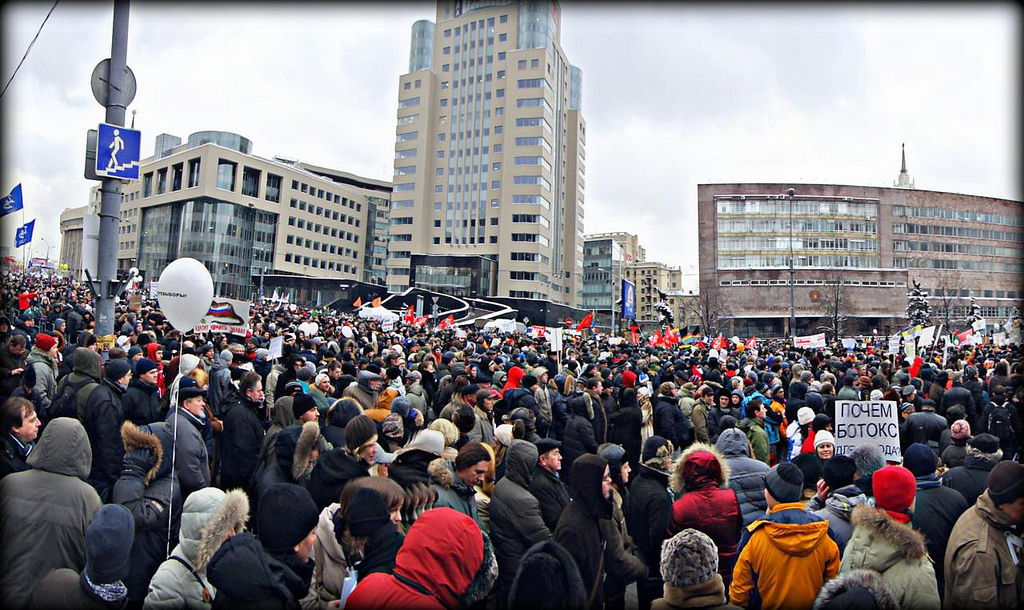 Russians protest for civil rights and transparent elections in Moscow.

In the early 2000s, Sarah Mendelson and I conducted a series of surveys in Russia about human rights and related issues, including a battery of questions measuring support for three “socio-economic rights” (the right to work, a minimum living standard, and private property), three “personal integrity rights” (freedom from torture, arbitrary arrest, and slavery), and three “civil rights” (freedom of expression, religion/conscience, and assembly). The survey informed respondents that each of these rights is included in the UN’s Universal Declaration of Human Rights, but that people have varying views of their importance.

We asked respondents to indicate which of five categories best reflected their view of each particular right. One category denoted “strong support” for that particular right; the second, “weak support”; and the other three represented neutral and (weakly or strongly) negative views. We found high levels of support for economic and personal integrity rights in annual surveys from 2001-2004, but much weaker support for civil rights. The results were so consistent from one year to the next that we stopped asking these questions. But we included the battery again in a survey we did in 2010, and I also ran it in surveys I conducted during Russia’s tumultuous election season of late 2011 and early 2012.

The later survey rounds showed a distinctive upward trend in public support for civil rights. Although from a policy perspective the 2000s witnessed a clear narrowing of civil space and rollback of civil liberties, public support for freedom of expression, religion and assembly grew steadily. By the early 2010s, over 40% of 20-59 year olds surveyed were strong supporters of civil rights, and over 70% supported them at least weakly (See Figure 1). The growth in support came at the expense of “don’t know” answers, with indifference and (less commonly) skepticism remaining fairly stable. The data show no trend at all in support for economic or personal integrity rights.

Further research could unpack the sources of this subtle but potentially important shift in Russian public support for civil rights.

My 2012 surveys asked respondents whether they approve of foreign funding for NGOs that work to protect the environment as well as those that monitor Russian elections. Election monitoring was a “hot button” issue at the time, because the government ran exposé-like television programs claiming that an organization called Golos—which played a key role in revealing fraud during the December 2011 parliamentary elections—was doing the bidding of the US government. I repeated these questions in a 2015 survey in Russia and three other post-Soviet countries, conducted in collaboration with Jane Zavisca.

Despite the Russian government’s claim that foreign-funded NGOs serve foreign interests and sow instability (a claim echoed to varying extents by governments in the other three countries surveyed), there is far from a consensus disapproving of such funding, even for an (expressly political) NGO that monitors elections (Figure 2). At the height of the Golos controversy in early 2012, 54% of Russian respondents opposed foreign funding of that type of NGO, but that number fell to 43% by 2015, despite a clear ratcheting up of anti-Western rhetoric by the Kremlin since early 2014. Moreover, a sizable minority (roughly one in five) of Russians approved of foreign funding for groups that monitor elections, and over one third were either indifferent to such funding, or did not have a clear opinion.

Russian public opinion toward foreign funding of environmental NGOs is even more mixed, though the trend from 2012 to 2015 is one of increasing opposition. Citizens in Ukraine, Azerbaijan, and Kyrgyzstan are all more likely to approve of foreign funding of both election monitoring and environmental NGOs than they are to disapprove. This suggests that the Kremlin’s efforts to export its agenda of tarnishing foreign-funded political NGOs have not been very successful.

I do not wish to sound overly optimistic: the human rights situation in Russia is grim, and there is little public opposition to government efforts to close civil society space and roll back the civil liberties progress of the 1990s. However, some pundit commentary exaggerates the extent to which the Russian population endorses Putin’s domestic agenda. Russian society is complex and heterogeneous. We should not be deceived by the very high (and most likely valid) poll numbers showing support for Putin and hostility toward the US: these numbers do not necessarily imply societal consensus in favor of closing civil society space or cracking down on foreign-funded political NGOs. Normative change is a gradual process, and the Russian public is still divided with respect to the importance of civil freedoms and the influence of foreign funding over domestic political NGOs.

Despite fifteen years of Putinism, the public opinion trend displays growing support for civil liberties and continuing ambivalence regarding foreign funding for political NGOs. This offers tentative grounds for hope in the face of an avalanche of bad news from Russia. Moreover, the findings from Ukraine, Azerbaijan and Kyrgyzstan remind us that the Soviet Union consisted of fifteen republics, not just one.

Perhaps there are more opportunities to cultivate a human rights culture in former republics other than in Russia.

Theodore P. Gerber is the Director of the Center for Russia, East Europe, and Central Asia and Professor of Sociology at the University of Wisconsin-Madison.