Until recently, the literature on whether the ICC deters potential war criminals has been more theoretical than empirical. Beth Simmons and Hyeran Jo noted that their study “marks the first quantitative evidence” that the ICC deters under certain conditions. While they make a significant contribution to the topic, we echo one of the concerns that Jack Snyder and Leslie Vinjamuri raised: quantitative studies can only tell us so much about how deterrence works. In-depth case studies are critical for teasing out the circumstances under which deterrence may occur.

As part of The Hague Institute for Global Justice’s Peace-Justice Nexus project, we conducted a case study of Kenya and its relationship with the ICC over time. Unique to this study is that it includes novel data from interviews conducted in Nairobi during 2015 with former government officials, journalists, academics, leaders in civil society and think tanks. Our evidence reveals the complexities of gauging the ICC’s deterrent power and shows that not all actors are deterred in all situations or in the same ways—or even permanently.

We do not embrace the notion of “all or nothing” deterrence.

We do not embrace the notion of “all or nothing” deterrence. While the ICC may deter in some circumstances, we do not expect that it can deter all actors all the time. We hypothesized that several factors will influence the ICC’s ability to deter: (1) the domestic political context, (2) the type of actor the ICC is targeting, and (3) the level of the ICC’s intervention. First, we distinguish between democracies and non-democracies (or unconsolidated democracies). The latter are states where the executive is not fully independent from other branches of government and that may not fully respect the rule of law. Existing research suggests that such states typically have poorer human rights practices and/or weaker domestic legal institutions than democracies. Should these states nevertheless join the ICC, they face an increased risk of prosecution than states with better practices.

Along these same lines, the type of actor the ICC pursues matters—especially if the target is a state leader in a non-democracy or unconsolidated democracy. Leaders in such states may rationally view the benefits of power as being exceptionally high and the risks of prosecution as exceptionally low. They not only have power, but also often have access to state resources they can divert to themselves or their cohorts. As to costs, they may face little risk of domestic prosecution because they can wield control over government resources and the state machinery so that their abuses are not uncovered or punished. These actors may also not find an ICC action threatening since their positions allow them to manipulate the international justice system that depends on state cooperation.

Finally, the level of the ICC’s intervention is also relevant to the deterrence question. For example, a low level of ICC intervention lowers the costs of criminal action, making it less likely that a rational actor will be deterred from committing abuses. A high level of intervention, though, may push state leaders “into a corner” such that they will do almost anything—including committing human rights abuses—so as to hold onto or gain power.

Evidence from the case study indicates that the ICC’s deterrent power does indeed vary depending on the level of the ICC’s intervention and the type of actor targeted. Our documentary and interview evidence shows that the lowest level of ICC intervention—ratification—did not prevent incidences of mass atrocities or other human rights abuses. In the aftermath of the 2007 presidential elections (two years after ratification of the Rome Statute), Kenya plunged into elite-driven ethnic violence that left more than 1,000 people dead and hundreds of thousands displaced. Ratification also did not prompt the Kenyan government to improve its judicial mechanisms or implement democratic reforms to bring perpetrators to justice. 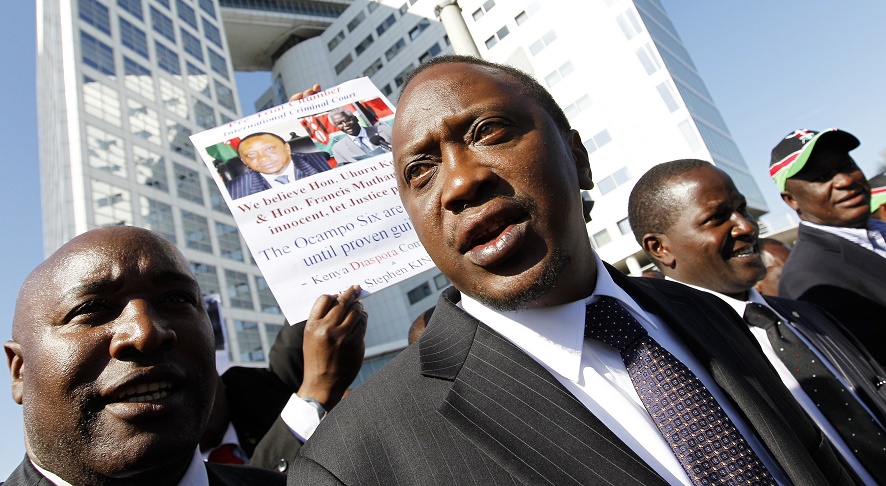 Interviewees argued that during this period, Kenyan leaders greatly discounted the ICC’s threat. Several interviewees, including former government advisors, said that at the time of ratification, political leaders did not realize that they could be brought to The Hague. One interviewee added that Kenyans expected that the “[ICC] would just deal with the worst of the worst.” Many Kenyans did not think of themselves in that category. Nor did we find support for the social deterrent effect that Simmons and Jo used to explain why the ICC deterred state leaders more than rebels. During this time period, Kenya was well connected to the international community by way of aid and trade relationships. Yet, its political leaders allegedly continued to instrumentally use violence in their quest for power.

We did find evidence of a deterrent effect at a higher level of ICC intervention: namely, after the ICC Prosecutor decided to launch cases against six Kenyans. There is reason to believe that these cases played a role in the relatively peaceful elections in 2013. First, among the six suspects were the two presidential candidates, Uhuru Kenyatta and William Ruto, who reportedly joined forces in part to defeat the ICC. The fact that these political rivals united may have alleviated some tensions between previously warring groups. Further, an ICC judge went on record that the court might issue arrest warrants if candidates were heard preaching hatred.

On the other hand, the evidence of a deterrent effect during the period of the ICC’s prosecution is equivocal. While the threat increased the costs, it may have influenced state leaders to commit abuses to help them hold on to or gain power in order to thwart the ICC. Reports suggest that while leaders were preaching peace, they were also bribing, intimidating, forcibly disappearing, or perhaps even killing (potential) witnesses.

Moreover, our case study evidence does not suggest any lasting deterrent effect. Nor does it show that Kenya’s leaders have embraced new norms. In fact, several interviewees stated they were not confident that the next elections would be peaceful. Also our study does not show any change in the government’s willingness to end impunity. Kenya’s leaders repeatedly tried to stop the ICC proceedings from going forward—lobbying the UN and AU. Kenya has also only prosecuted a handful of low-level perpetrators of the 2007 violence, and many interviewees stated that the Kenyan government had made clear that it would not be seeking to prosecute perpetrators of the violence. President Kenyatta said as much in his 2015 State of the Nation address.

To conclude, our case study reveals that the ICC’s ability to deter depends on the level of the ICC’s intervention as well as a number of factors specific to the country and the target(s). Other in-depth case studies of ICC situation countries would contribute to a more nuanced understanding of its deterrent power.

*For a more detailed look at our case study evidence assessing the ICC’s legal and social deterrent effect during different time periods relevant to the ICC’s level of intervention, see the article “Unpacking the Deterrent Effect of the International Criminal Court: Lessons from Kenya”, written by Dr. Yvonne Dutton and Tessa Alleblas, which is available on SSRN (Forthcoming St. John’s Law Review).

Tessa Alleblas is a Researcher with the Conflict Prevention Program of The Hague Institute for Global Justice.