Indigenous women in Guatemala are using the concept of extraterritorial obligations to hold corporations accountable for violence—and to set important precedents in human rights law. 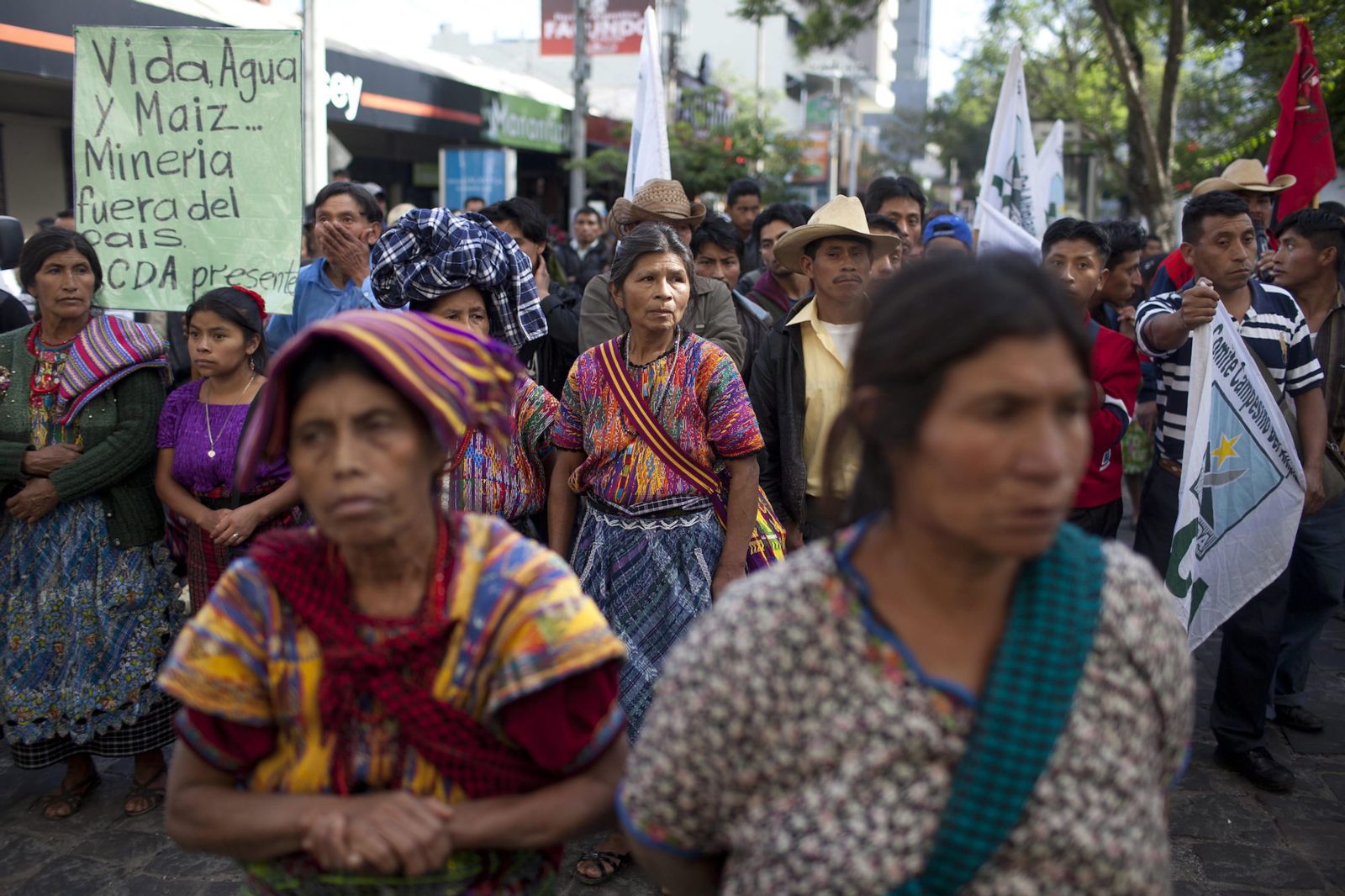 In Latin America, the role of Indigenous, Afro-descendant, Garifuna and peasant women in the defense of life, land, territory, and the environment is increasingly visible. Women have become more vocal as extractive industry projects are installed in their communities without free, prior, and informed consent, resulting in dispossession of land, loss of livelihoods, and the eviction of communities. Often, women’s rights are not protected by the state, and they become victims of gender-based violence when defending their territories. Women human rights defenders face different types of resistance and violence linked to sexism and gender stereotypes, meaning they have to challenge the status quo on multiple fronts.

The "Lote Ocho" case is a prime example of this: 11 Q'eqchies Mayan women allege that in 2007, they were raped and sexually assaulted by private security guards from Skye Resources Inc., now part of Hudbay Minerals, a Canadian mining company, during forced evictions in Izabal, Guatemala.. The Indigenous women argued that the evictions took place in a context of a land conflict between the Indigenous communities and Hudbay Minerals. The day that the women suffered the attack, they had decided to remain at their homes as a form of resistance to the attempt to this forced displaced them from their lands. Only women and children were in the community at that time.

This case has deep historical and structural causes. The dispossession of the lands of Mayan communities and the rape of Indigenous women sit on a continuum of violence in Guatemala’s history. In the context of the armed conflict (1960-1996), the military corps used sexual violence against Indigenous women as a weapon of war with the objective to destroy the social fabric of Indigenous communities  and symbolically mark the appropriation of the territory of the communities on the part of the military. The "Lote Ocho" case highlights the symbolic and political links that exists between that past and the present, between the territory, the Indigenous women’s bodies and the Mayan people's collective social fabric. It also shows how patriarchal and racist logics remain present in Guatemala: nowadays, Indigenous women suffer the same forms of violence as in the past, however, now perpetrated by new actors such as private security agents.

Nowadays, Indigenous women suffer the same forms of violence as in the past, however, now perpetrated by new actors such as private security agents.

However, many Indigenous women in Guatemala perceive the justice system as distant in geographic, cultural, economic, and linguistic terms. Due to the vast economic interests behind some mining projects and the influence they can exert on local authorities, Indigenous women’s trust in the independence and impartiality of the decisions made by local prosecutors and courts has eroded. For these reasons, the Indigenous women of the "Lote Ocho" sought justice in Canadian courts in 2012. Their claim was that the Canadian mining company was negligent, as it was aware that its subsidiary in Guatemala entrusted the private security of the mining project to a company that did not have the legal authorization to operate in this way. For example, the subsidiary did not have the corresponding permits to carry and use firearms. The plaintiffs also argued that it was well known and in the public domain that private security chiefs were involved with criminal structures, arms trafficking, and drug trafficking networks.

The Ontario provincial court (Canada) determined that the Canadian parent mining company could be tried in Canada for its legal responsibility for acts of human rights violations caused by its subsidiary abroad, including rape against the 11 Mayan women Q'eqchies. This legal decision set an important precedent.

The case was able to progress in Canadian courts because of the concept of extraterritorial obligations of states vis-a-vis human rights. This concept considers that the state has obligations in relation to human rights abuses committed by non-state agents under its jurisdiction, including its transnational companies operating outside its territory. This concept has the potential to expand access to justice for victims of abuses linked to transnational companies, in particular where remedies in host states (i.e., the state where the company is operating, as opposed to the “home” state where it is incorporated) may be limited. Of course, these legal concepts still need to be developed and strengthened both by national courts and by international mechanisms.

This concept has the potential to expand access to justice for victims of abuses linked to transnational companies, in particular where remedies in host states may be limited.

At the national level, the Guatemalan justice system has taken important steps against impunity in cases regarding the armed conflict: Sepur Zarco was one such case, and the first about women’s rights and sexual violence. Its sentence and reparation plan set an important and inspirational precedent for the Q'eqchies women of the "Lote Ocho” case. This triumph and the fact that they have met and shared with the Grandmothers of Sepur Zarco and other women victims of sexual violence, "(...) gave them the strength to say ‘we are going to submit the lawsuit here in Guatemala’”, despite the challenges that persist at the national level. In addition to the suit in Canada, they are now working to also file their case before national courts.

On January 22, 2020, the women of the "Lote Ocho" case took another step in their pursuit of justice before the Canadian Courts: the Superior Court of Justice of Canada confirmed that women plaintiffs can present new evidence and details to the case that is ongoing. The Court “confirmed that the plaintiffs can and are suing Hudbay  not only for the rapes committed by the mining company’s security personnel, but also for the rapes committed at the same time by the Guatemalan police and military”. This is significant because it means the Indigenous women can provide information about the attacks allegedly perpetrated by the Guatemalan military and the police, cases which face near total impunity at the national level in Guatemala. While in the past women have been intimidated or threatened when seeking justice for this case, it remains unclear what further challenges these women will face.

The Lote Ocho case has been the result of a process of dialogue, analysis and psycho-legal support between Indigenous women and national and international feminist and human rights organizations (e.g., Mujeres Transformando el Mundo, Equipo de Estudios Comunitarios y Acción Psicosocial, Rights Action and others). Pooling their experiences, working together, and complementing each other’s expertise and knowledge, while always having Indigenous women at the center and amplifying their voices has been the foundation of these alliances. These alliances have contributed to change the power relations of Indigenous women with public institutions, vis-à-vis the state and with the business enterprises. These alliances also echo the activism by Indigenous women, who in many different ways continue to strongly resist violence against them.

Andrea Bolaños Vargas is a Colombian political scientist specializing in human rights, women’s rights, and Indigenous peoples. She has been an international consultant for the Inter-American Commission on Human Rights, UN-Women, UNHCR and the Office of the Resident Coordinator of Panama.

Andrea Suárez Trueba is a Mexican lawyer specializing in gender studies. She has worked as an international consultant for UN Women and the United Nations High Commissioner for Human Rights in Guatemala. She has conducted research on violence against women, women’s rights, and specialized justice on femicide and violence against women.