The ASEAN Economic Community should insert human rights rules into its implementation plan before integrating the vast Southeast Asian market.

The Association of Southeast Asian Nations (ASEAN) “Economic Community” just ran headlong into its December 2015 implementation deadline. This initiative, adopted by ASEAN leaders in 2007, seeks to transform the region into one with “free movement of goods, services, investment, skilled labour, and freer flow of capital.” But what does this really mean for the people of Southeast Asia and their human rights?

It is no secret that ASEAN countries have long lacked the capacity to provide legal protection and ensure the welfare of their citizens. The region has only average rankings on the UN Development Program’s “Human Development Index” and the World Justice Report’s “Rule of Law” index. When ASEAN leaders drafted their “blueprint” for the region, they did not consult civil society; it was a top-down process of political elites, and many stakeholders still have limited or uneven knowledge about the initiative. This is highly problematic, as the sheer number of low-cost workers and accompanying lack of regulations mean that labour rights are always an issue in the region. In addition, in many ASEAN countries, civil society workers and human rights activists have been threatened or killed, and their organizations disbanded. Most recently, for example, Sombath Somphone, a well-known activist in Laos, went missing. The United States, the European Union and the United Nations have expressed concern that Somphone is being held by Laos government authorities, which they deny.

The ASEAN drafters did not include human rights principles or issues in their blueprint, and as a result, many activists are calling for a delay in its implementation.

The ASEAN drafters did not include human rights principles or issues in their blueprint, and as a result, many activists, including my own organization, are calling for a delay in its implementation. We are particularly concerned that the blueprint does not have a mechanism of protection and accountability for the potential negative impacts of market integration. Even if ASEAN calls on its members to establish their own protection mechanisms, the capacity and ideologies of ASEAN countries is extremely diverse.

Historically, ASEAN countries have had business practices that are not human rights-friendly, violating national regulations dealing with the use and treatment of land and labor. These have resulted in violations of labour rights, seizure of indigenous peoples' lands, environmental destruction, killings and arbitrary detentions. Indeed, the 2014 Human Rights Risk Atlas notes that in many low-cost labour markets (such as Southeast Asia), worker’s rights are often compromised, and rural or indigenous communities are subject to land grabs and forced displacement. Without robust regulations in place, and especially with repressive government clamp down on human rights, companies are left to self-regulate. Without specifically putting rights language in place, the ASEAN Economic Community Blueprint essentially is leaving low-income labourers to fend for themselves. 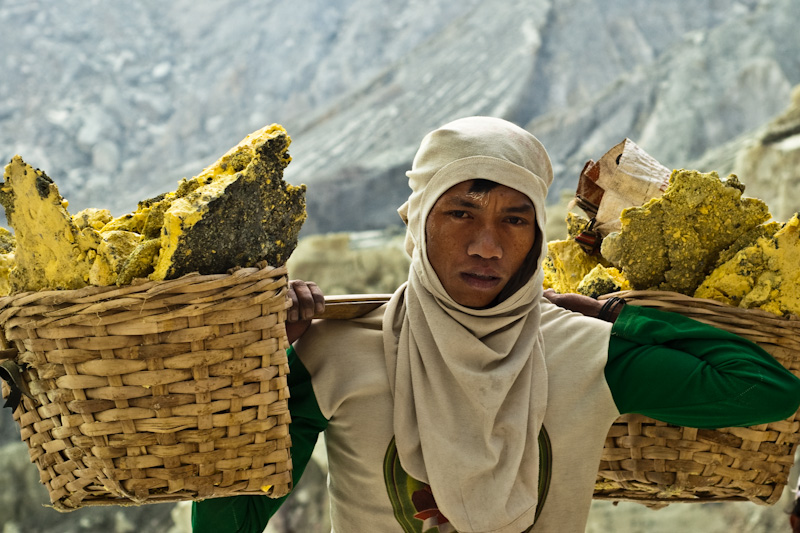 A miner carries a load of sulfur from Kawah Ijen, Indonesia. Without rights language, the ASEAN Economic Community Blueprint leaves low-income labourers to fend for themselves.

While the AEC Blueprint is promising equitable development, IBON International, a think tank based in the Philippines, argues that this regional integration—following old models of neoliberal thinking—is likely to worsen inequality in the region and may create new problems for the poor and marginalized.  A single market will lead to unbalanced competition: those who have access to information, sufficient capacity and more resources will enjoy the greater benefit. On the other hand, those who are poor and marginalized will be seen as problems to be neglected or defeated.

A few important issues need to be taken into consideration. First, it is crucial that information be made available to everyone—the unevenly distributed knowledge and awareness around this initiative is creating a myriad of problems. Second, the existing mechanisms to protect rights need to be made more effective. Creating a single market without having sufficient complaint mechanisms in place will create opportunities for certain parties to avoid accountability if things go wrong. A strong accountability mechanism with adherence to rule of law—and consequences for violators—is essential.

Third, civil society in Southeast Asia in particular needs to get creative: how can it be part of this larger regional movement while protecting ordinary people from being exploited? How can civil society get a seat at the AEC table? What will it take to extend the implementation deadline? NGOs must be involved in pushing for the adoption of an international statue for business actors involved in human rights violations. This needs to be done now, before the ASEAN Economic Community is put in place. Once the community is up and running, it will be hard to incorporate new international regulations into its operation.

The Asian Economic Community began as a top-down, elite-driven process; civil society must now push from the bottom up to ensure that all workers are adequately protected.

Haris Azhar is coordinator of KontraS, a national Indonesian rights group based in Jakarta.