Civil society organisations are targeted because political elites know they have power. But where is the international backup?

On the 5th of March 2016, the Turkish government took control of the country’s largest private newspaper, Zaman. The takeover happened at the newspaper’s head office during bizarre if not depressingly familiar scenes: police in riot gear firing canisters of tear gas into crowds of chanting protestors.

Ten years ago, such a brazen assault on the free press might have defied the logic of Turkey’s international political calculus. No longer. Sadly, we now live in an era where political leaders and powerful non-state actors know that civil society and the media are fair game, and that egregious violations of fundamental rights are less likely to attract punitive sanctions or even a cold shoulder from the international community.

Of course, civil society is reacting to the current threats against it, as shown through the courage of activists who continue their perilous struggle around the world every day. But it has done so mostly on a country-by-country basis. For its part, the United Nations has tried to address the situation by issuing strong condemnations in repeated resolutions, raising the profile of international agreements and supporting working groups and Special Rapporteurs, whose work helps to translate international law into practical recommendations for states to follow. Despite all of these efforts, the overall picture remains grim.

In today’s world, combatting terrorism, economic stagnation and the refugee crisis all trump the need to protect democracy and space for a vibrant civil society. There is no doubt that these are important issues, and all of them are at play in Turkey. The raid on Zaman comes at a time when European Union (EU) leaders are more likely to gloss over human rights violations—they desperately need the Turkish government’s help to address what they perceive as the much more pressing problem of mass migration through Turkey from the Middle East. 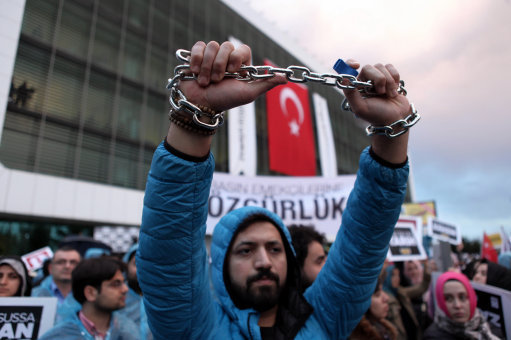 Thousands of protestors gather in solidarity outside the Zaman newspaper headquarters after Turkey declared a government takeover of the agency.

Governments all around the world are making similar calculations every day. A decade ago, we might have expected such attacks to be confined to particular geographic hotspots, beset by conflict, weak democratic institutions and authoritarianism. In 2014, CIVICUS published a list of 96 UN Member States that had violated fundamental freedoms to a significant degree. Our provisional findings for 2015 show that there are now at least 101 countries on this list. These countries are led by range of authoritarian, hybrid and democratic governments, and people living in these countries account for roughly 86% of the world’s population. Mimicking a contagious disease, the erosion of civil liberties has now spread worldwide.

Ever since 2013, when Edward Snowden revealed the extent of mass surveillance by the United States and several other established democracies through the Five Eyes alliance, citizens everywhere have realised that their own elected, supposedly accountable governments are threatening their fundamental freedoms. Attacks on civil society in democratic settings are now taking other forms too—from restrictive NGO rules in the UK, to harsh penalties for peaceful protestors in Spain and Australia, to public vilification of civil society in Hungary. According to our monitoring from 2015, the number of countries seriously violating space for civil society on the European continent jumped from nine to 16.

All of this has made it much more difficult for democratic states to claim the moral high ground when promoting human rights outside their borders. It has also emboldened other states, who know, like Turkey, that they are unlikely to be held to account internationally for abusing civil society.

Assaults on civil society are fuelled by a growing culture of impunity.

Domestically, these violating governments also have free reign. While independent courts and a strong rule of law shield civil society from the worst forms of attack in democratic states, in many other parts of the world—where democratic institutions are much weaker—assaults on civil society are fuelled by a growing culture of impunity. This includes impunity for unidentified police officers using excessive force against peaceful protestors, and a lack of consequences for state and non-state agents who ransack NGO offices. Even worse, it means that people who have gunned down investigative journalists in cold blood are not investigated or prosecuted.

Impunity also extends beyond individuals. For example, profit-making companies implicated in human rights violations—such as maquiladoras in Mexico—are not held to account. In addition, states such as Azerbaijan, Ethiopia and Egypt, which have destroyed their civil societies, continue to be courted on the international stage by democracies in geopolitical power plays. In pilot surveys that CIVICUS conducted with civil society in 2015-2016 about their operating environment, respondents in South Africa, Poland, Tajikistan and Macedonia universally rated lowest the state’s willingness to investigate abuses against the sector.

There is no doubt that civil society is unfairly targeted in all of this. No justification exists for beating or locking up people trying to foster robust democratic debate or hold leaders accountable. At the same time, civil society must avoid creating a one-track narrative based on disempowerment and victimisation. We must remember that civil society organisations, social movements and individual activists are singled out because they are having an impact, because they do have power, and because their actions are upsetting entrenched political and economic elites.

More fundamentally, the assault on civil society should be correctly understood not just as a symptom of democratic failure, but also as a weakening of the forces that can actually solve the problems of intolerance and exclusion currently dividing societies. CIVICUS’ State of Civil Society Reports in 2014 and 2015 made it abundantly clear how civil society has been the first responder in crisis and conflict situations, saving lives, reaching out with compassion to refugees and defending the rights of the most marginalised people in society.

What we now need is far greater international solidarity and the creation of an internationalised social movement, which should have as its core purpose the development of a positive counter narrative and a vision for free and equitable societies, safeguarded by a robust space for civil society. In 2016, CIVICUS plans to support these efforts through a new international campaign on civic space, and through the launch of our new Civic Space Monitor web platform. Civil society also needs to push its traditional allies to do more to prevent democratic erosions at home so that their calls for protection will be taken seriously. For instance, European CSOs must continue their efforts to ensure the EU makes more active use of tools like the framework to safeguard the rule of law, recently called into action for the first time in response to events in Poland.

If we don’t move on this now, actions like Turkey’s outrageous takeover of Zaman newspaper—and the world’s deafening silence—will only become more common.