Drawing on studies of Muslim aid organisations in Britain, Saudi Arabia, Kuwait, Jordan and Bangladesh, the author explores how these organisations do and don’t engage with human rights. She identifies three potential areas of contention as well as some of the strategies the organisations adopt to overcome these dilemmas.

Recently, human rights have become very popular in the field of development aid, primarily through the so-called rights-based approach. This approach emphasizes an understanding of development and human rights as closely interlinked and interdependent, and aiming to incorporate principles of equality, non-discrimination, accountability, and participation into development aid.

It probably comes as no surprise to most people that Muslim aid organisations have difficulties signing up to certain human rights. Many are deeply skeptical of women’s rights or rights of homosexuals, for example, which they see as highly normative expressions of secularist, individualistic values, and thus difficult, if not impossible, to align with conservative religious values of family and community. These accusations echo views of human rights as an imperialist project of the West, put forth not only by Islamic scholars but also reflected in the Asian values debate  and among the so-called TWAIL scholars (Third World Approaches to International Law).

While this is a relevant and necessary debate, there are other, equally important, conflicts at play in the relationship between human rights and Muslim aid.

Based on studies of Muslim aid organisations in Britain, Saudi Arabia, Kuwait, Jordan and Bangladesh, this article explores the ways in which these organisations relate – or do not relate – to human rights, pointing to three potential areas of contention and identifying some of the strategies the organisations apply in order to overcome these dilemmas.

‘Ties of compassion and sympathy’

One conflict between Muslim aid organisations and the discourse of human rights centers on conceptions of relations between givers and recipients of aid. According to the rights-based approach, aid is the right of recipients, and as such, the relation between giver and recipient can be conceived in terms of a contract between equal parties. Muslim aid organisations, on the other hand, often conceive of aid as a gift to a grateful recipient from a generous donor, obliged by a religious duty towards God and the religiously defined community, the ummah. 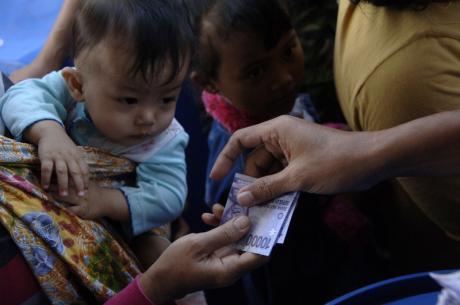 Contrary to the rights-based approach’s emphasis on accountability and institutionalization, the notion of aid as a gift encourages a personal and intimate relationship between recipients and givers. Emphasising what one organisation describes as “ties of interdependence, compassion and tender sympathy”, some Muslim organisations see their aid is distinct from that of many others. “They don’t have the same feeling of family as we have, that the orphans are a part of our family,” says a staff member in a Saudi Arabian NGO, comparing his organization with secular ones: “For them, it’s routine, it’s just a job they need to do.” According to many people, personal care and compassion are more important qualities in aid provision than accountability and professionalism; in fact, such qualities may even be counterproductive to the ‘feeling of family’, injecting a sense of distance into the relationship between recipient and giver.

‘Solidarity between the sons of the Ummah’

A second reason for the reluctance of many Muslim aid organisations to adopt a rights-based approach may lie in the underlying rationale of solidarity shaping much Muslim aid, which is closely related to the ‘feeling of family.’ According to this rationale, Muslims are obliged to show solidarity and support one another because they belong to the same religious community. A statement from a Kuwaiti NGO illustrates this:

[Charity] is one of the faith’s most effective tools for spreading the values of solidarity and support between the sons of the Ummah. It encourages them to remain united like one body; when one part of it suffers a complaint, all other parts join in, sharing in the sleeplessness and fever.

Using terms such as ‘Islamic society’ or ‘Islamic brotherhood’, many organisations seek to nurse a strong sense of solidarity between members of this community. The donor gives to a fellow Muslim brother (or sister) in a country far away, because they are both part of the same community, the umma. By receiving the gift, the recipient likewise aligns him- or herself with the umma, affirming its existence.

Contrary to the rationale of human rights, then, the solidarity rationale seems to prioritise the community over the individual. Likewise, this rationale also clashes with the human rights discourse’s emphasis on non-discrimination, insofar as it encourages a particularistic focus on fellow Muslims rather than a universalistic focus on humanity as such. This is reflected in most Muslim aid organisations’ choice of target groups, consisting primarily, if not solely, in Muslim countries and communities. As a staff member in a Kuwaiti NGO says: “A Muslim should help his brothers and sisters first.”

‘Islam is the solution’

The third, and perhaps most fundamental, conflict between human rights and Muslim aid grows out of a particular interpretation of Islam, shaped by the Islamic resurgence and found in many contemporary Muslim aid organisations. Epitomized in the Muslim Brotherhood’s slogan ‘Islam is the solution,’ this understanding sees religion as an all-encompassing solution not only to moral and ethical problems, but also to economical, political and – not least – legal ones; what the historian of religion Bruce Lincoln calls a ‘maximalist’ religion. As the director of a Jordanian NGO proclaims: “Islam is a comprehensive system – it about politics, law, economy, social systems, culture, everything. You cannot just take a small part of it and leave everything else aside.”

In this perspective, there is no need for additional legal systems such as the international human rights system, insofar as Islamic law already provides a comprehensive set of rights. “You can derive human rights from Islam,” says a woman from a Jordanian charity. In fact, international human rights law is not only superfluous; it is also potentially dangerous insofar as it establishes a parallel legal system to the Islamic one, challenging the authority of the latter.

Despite the difficulties sketched in the above, some Muslim NGOs are trying to integrate a rights-based approach into their work, in different ways and to different degrees re-interpreting Muslim aid traditions and principles.

Zakat: A right of the poor

One example of a relatively ‘mild’ reinterpretation of Muslim aid principles is the turn from an understanding of aid as a gift to a right, found in some Muslim NGOs. This is a reinterpretation that does not engage explicitly with discourses of human rights, but relies entirely on discourses of Muslim aid. However, it does so in ways that may facilitate implicit alignment with rights-based approaches to development.

Instead of emphasizing conceptions of aid as a gift or a favour from the wealthy to the poor, this reinterpretation promotes an understanding of aid as a right endowed by God to the poor and a duty imposed by God upon the wealthy, drawing on Islamic traditions of redistributive justice. “God orders people to take from the rich and give to the poor. God also said that it is the right of the poor to receive this money,” one person tells me, quoting the Qur’an: “And those in whose wealth there is a recognised right for the beggar who asks and for the unlucky who has lost his property and wealth”. As such, this perspective encourages a contractual relation between equals, easier to align with a rights-based approach than that of gift-giving, but remaining squarely within well-established traditions of Muslim aid.

Other organisations present somewhat more radical reinterpretations of Muslim aid traditions, engaging more explicitly with discourses of human rights and rights-based approaches to development. The shift from a rationale based on religious solidarity to one based on principles of universalism and non-discrimination is an example of this.

In some organisations, the provision of aid is no longer restricted to fellow Muslims, but extended to “those in need regardless of gender, faith, background, or nationality,” as one NGO writes. Another organisation declares: “Muslim Aid believes that all humans have the right to development.” In concrete terms, this means that these organisations now include Christians, Hindus and other non-Muslims in their aid provision. “We even give our Ramadan food packages to non-Muslims!” a staff member proclaims. “We care about humanity, we don’t care about their faith.”

Referring to Islamic sayings and Qur’anic verses, the organisations seek to justify this shift religiously. One person explains: “Most instructions from the Prophet Muhammad and the Holy Qur’an are about motivating people to help others, to support and help the poor. And they don’t mention what kinds of poor – they don’t say what gender, what race, what religion.” Another person says: “This is the humanitarian spirit of Islam.”

‘We don’t need to raise the Islamic flag…’

Such references to the ‘spirit of Islam’, ‘Islamic charitable values’  and ‘the humanitarian teachings of Islam,’  denote an interpretation of Islam as an ‘ethical reference’,   rather than an orthodox, visible religiosity. And this points to a third, somewhat more general, example of how contemporary Muslim aid organisations seek to make room for human rights:

Turning away from an all-encompassing, ‘maximalist’ religiosity, influencing all aspects of aid provision, some organisations instead promote a more ‘minimalist’ understanding of religion, relegated to the sphere of organizational values, underlying principles and personal motivation. A person from a British Muslim NGO says: “We don’t need to raise the Islamic flag when we do humanitarian work, we don’t need to say that we are more humanitarian because we are Islamic.”

Compared to an understanding of religion as law, such a religiosity, concerned with values and morals, can much more easily encompass discourses of human rights and a rights-based approach to development. As the UN Special Rapporteur on Freedom of Religion Heiner Bielefeldt notes, “the principles of human rights can be connected meaningfully with the spirit of the shariah, provided that the shariah is primarily understood as an ethical and a religious concept rather than a legalistic one”.