No Transit: The criminal treatment of transgender asylum seekers in the United States

Transgender asylum seekers, who are already more at-risk than typical applicants, now face tremendous hurdles and abuse as they try to survive in the confines of the U.S. immigration system. 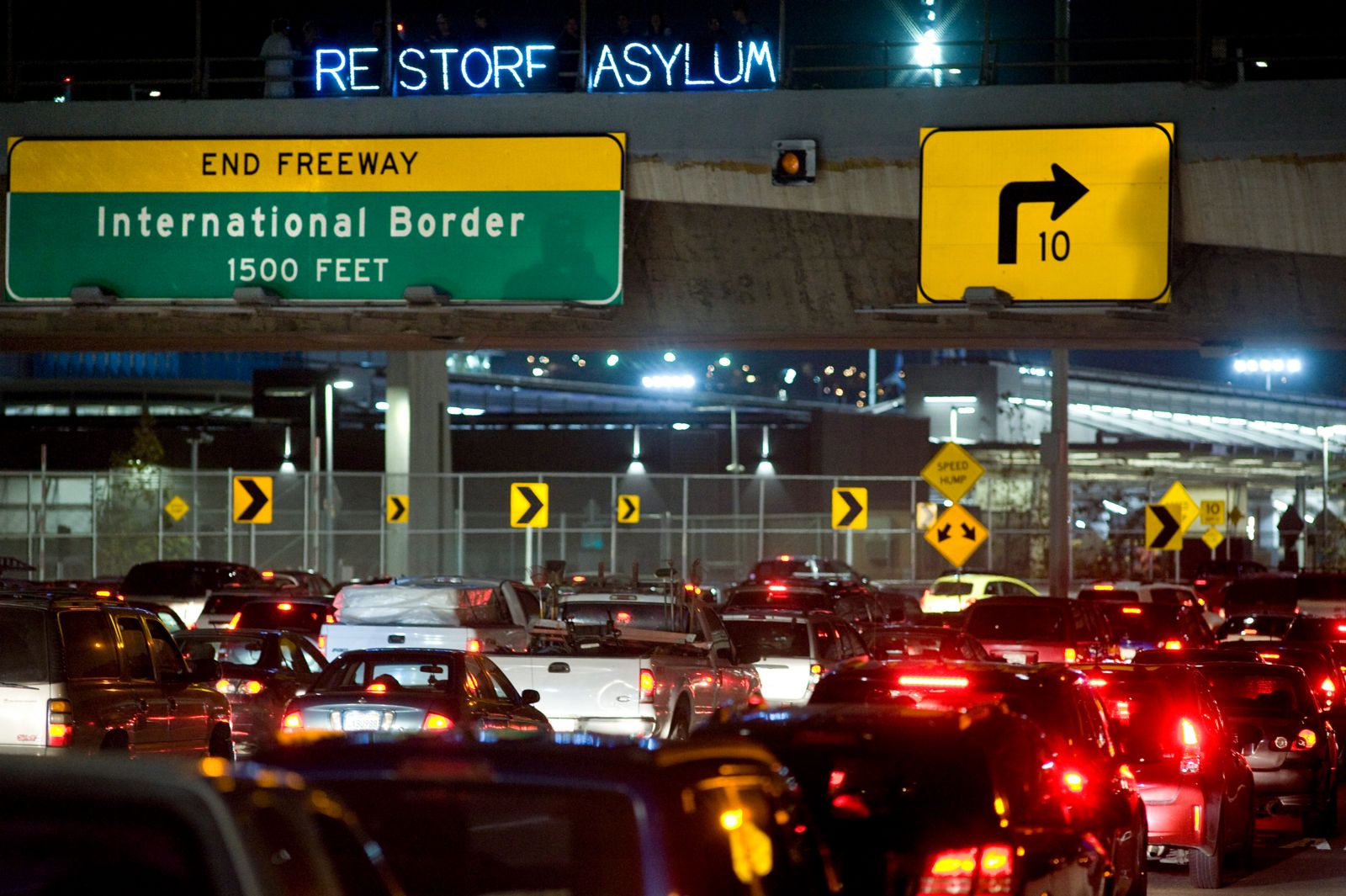 Activists from the human rights group, Doctors for Camp Closures, hold illuminated signs on a freeway overpass next to the U.S.-Mexico border in San Diego, California, in February 2020. The group is calling for the end of US immigration detention centers and the US policy of returning asylum seekers to Mexico and Central America to wait for their asylum court appointments.  EFE/EPA/DAVID MAUNG

Over the past four years, the Trump administration enacted an unprecedented reduction in the number of asylum seekers admitted to the United States—admissions are only about 16% of the cap the Obama administration established in 2016. Transgender asylum seekers, who are already more at-risk than typical applicants, now face tremendous hurdles and abuse as they try to survive in the opaque confines of this increasingly constrictive immigration system.

By their own accounting, the Department of Homeland Security had approximately 300 transgender asylum seekers in their custody in 2019. Under U.S. law, anyone has the right to present themselves as an asylum seeker at the U.S. border or within the United States—regardless of how and where they enter. Before they can be removed, the law requires they be given the opportunity to present their case for a “credible fear” screening before a judge or qualified asylum officer. However, transgender asylum-seekers find themselves housed in detention centers at rates over twice that of typical applicants, their average detainment being about 99 days. They are also unlikely to have their cases reviewed by individuals familiar with their unique needs and circumstances, both as transgender individuals and in the context of their home countries.

Once in the country, trans asylum seekers experience mistreatment in multiple ways. Significantly, they are not typically placed in housing reflecting their gender identity, despite this being an ICE directive established under the Obama administration. This practice places them at risk for harassment and sexual assault. In fact, according to a report by the Center for American Progress, LGTBQ asylum seekers in general are 97 times more likely to experience sexual assault than typical detainees. This staggering statistic reflects the fact that such detainees also may suffer multiple instances of sexual assault in custody.

Additionally, transgender detainees seldom receive the level of mental health and medical attention they need. Commonly, such trans-specific treatment includes affirming psycho-social services, provisions for ongoing hormone replacement treatment, post-surgical care, and medication and treatment for any health conditions, such as HIV. Consider, during this pandemic, too, the impact of COVID-19 upon transgender asylum seekers, as members of the LGTBQ+ community whose vulnerabilities are already amplified.

Even facilities dedicated to transgender asylum seekers fail to meet their particular needs. The Cibola County Correctional Center, a private prison in Milan, New Mexico, was shut down in 2016 after complaints of repeated medical violations and at least three health-related deaths there. Remarkably, Cibola reopened just three months later as a detention facility, which now includes a dedicated unit housing 60 transgender women. Apparently, many previous guards were reinstated there. Cibola is run by CoreCivic, a private company, which contracts with ICE to profit off of detainees. As is often the case, the facility's remote location makes it difficult for lawyers to work with asylum seekers. In mid 2019, 29 transgender detainees at Cibola collaborated on an open letter complaining about sub-standard medical attention and abuse at the hands of the facility’s employees.

One of the women signing that letter was Alejandra Barrera. After fleeing El Salvador, due to multiple instances of sexual assault by both Salvadoran military and MS-13 gang members, Barrera found her way to the U.S. where she spent two years in detention at Cibola with no explanation for why she could not be released. She requested but was denied proper medical attention six different times. She was denied parole five times. She says six of her teeth were removed at the facility due to inadequate dental care.

Though many Americans feel compassion for these asylum-seekers, they may not realize their treatment actually breaches both international and U.S. law.

Detainees are also likely to be punished at the hands of facility employees. In the New Yorker, Barrera explained how an entire hall of detainees were pepper sprayed because two women were fighting. She also said she was denied water. A 2016 Human Rights Watch report detailed the routine abuse of transgender women in these facilities, including sexual assault and harassment by male detainees and guards, subjecting them to “the same kinds of abuses that drive many transgender women to flee their home countries in the first place.” Such detainees suffer this punishment and abuse despite having committed no crime in seeking asylum.

Though many Americans feel compassion for these asylum-seekers, they may not realize their treatment actually breaches both international and U.S. law. The United States ratified the 1967 Protocol Relating to the Status of Refugees in 1968, essentially agreeing to the 1951 Convention Relating to the Status of Refugees, as well.  Article VI of the U.S. Constitution demands we consider “all” signed treaties as “the supreme Law of the Land.” The U.S. further cemented these rights for asylum seekers when Congress passed the Refugee Act of 1980. The existence of that Act negates some already dubious claims that these treaties are not “self-executing.” The Trump administration, for example, argued it could rightfully shut down asylum admissions during COVID-19 since the U.S. had no “legal obligation to conform its conduct to international treaties that are not self-executing or otherwise implemented into domestic law by an Act of Congress.”  Besides, the Constitution makes no such distinction between self-executing and non-self-executing treaties. In summary, these laws require that transgender asylum seekers receive humane housing and medical attention while their cases are examined by qualified individuals.

Alejandra Barrera’s story has a hopeful ending. After almost two years in confinement, she was released and is now living in Albuquerque until her asylum case can be processed. However, if her asylum is not granted, she could still be deported to El Salvador, a country known to be particularly dangerous for transgender women, where she is already known as a transgender rights activist.

If the Biden administration takes action, it will ensure a better future for Barrera and many more trans asylum seekers. As we push for these changes, however, we should continue to share these individual’s stories, too, in the hope of preparing a place of real asylum for them.

Robert Stribley is a writer and photographer with interests in immigration, human rights, privacy and security. He is currently completing a Certificate in Global Affairs at NYU. You can follow him on Twitter @stribs.