Effective efforts to combat bonded and child labor in the Indian sandstone supply chain will require a nuanced approach to establish the right incentives to enforce the law. 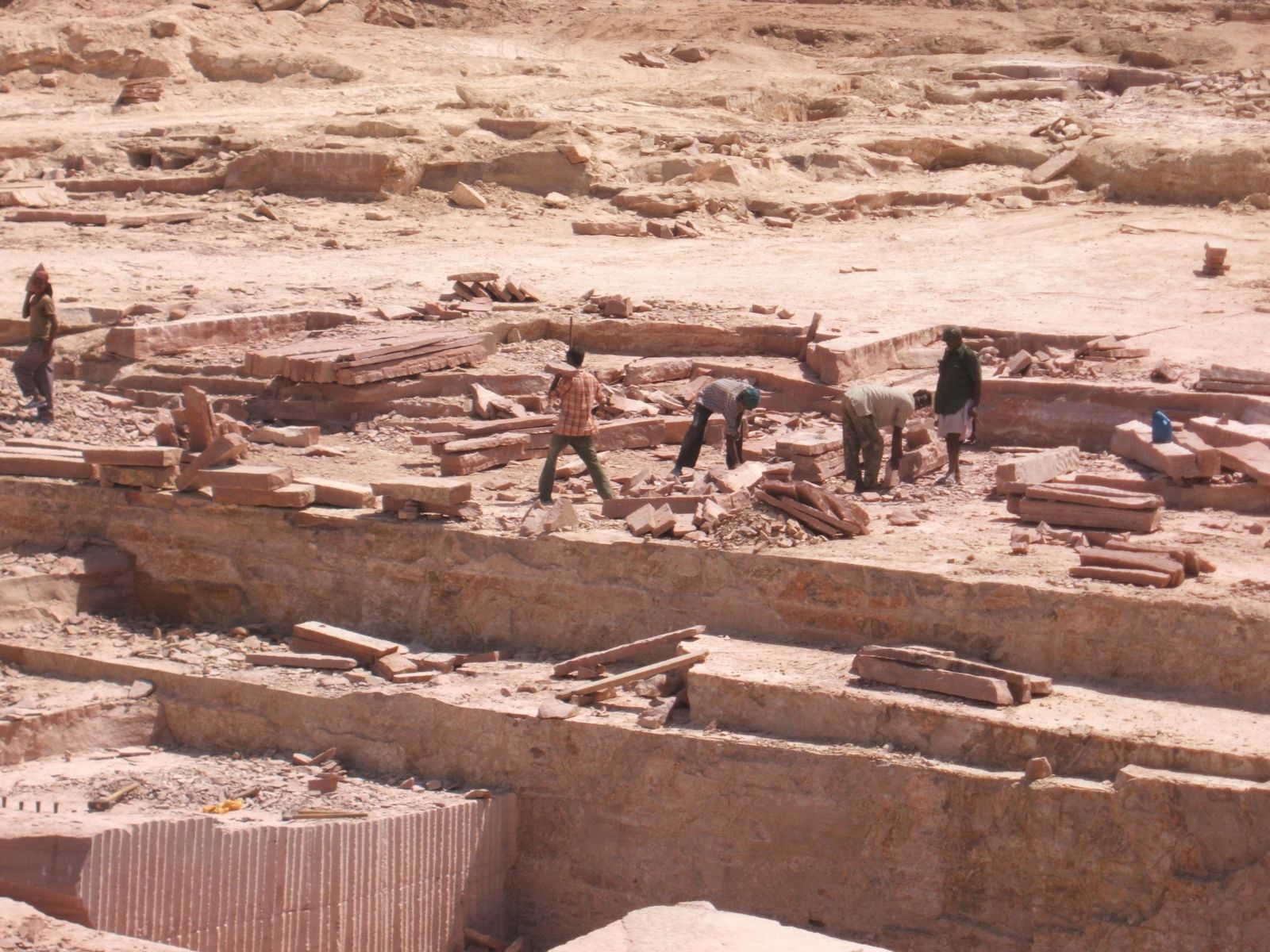 Last month, the Department of Labor added Indian sandstone to its watchlist of products potentially derived from child labor, partly as a result of reporting by the American Bar Association Center for Human Rights. The Center’s latest report, Tainted Stones: Bonded Labor and Child Labor in the India-U.S. Sandstone Supply Chain finds that the industry employs nearly three million workers but is marred by the persistence of bonded labor, intergenerational bonded labor, and child labor. Sandstone is a commonly used stone for paving and construction— likely you’ve seen some form of it in a large office lobby or outdoor installation.

As part of the Center’s work, the Justice Defenders Program conducts trial observations and coordinates pro bono legal assistance for human rights defenders that face retaliation for their work. For the last seven years, it has supported over 1,000 defenders, including labor activists and union leaders, working to expose corrupt business practices or ensure adequate protections for workers. The Program undertook a comprehensive study to examine potential rights violations in the Indian sandstone mining industry by examining the national legal framework, protection mechanisms, and compliance with international law and labor standards.

As India takes its place as a leading trade partner for nations around the globe, two concurrent trends are emerging that will impact the future of workers’ rights in the country. On one hand, several labor protections have been suspended in states across India in response to COVID-19, driving down wages and eroding working conditions. At the same time, some of India’s major trade partners are expanding their focus on supply chains, ensuring that products sold within their borders are not the result of extreme human rights violations.

As nearly 90% of the sandstone deposits in India originate from Rajasthan, the Center conducted interviews with various stakeholders in the Rajasthani sandstone mining industry. The Center’s report identifies an extensive presence of bonded labor in the sandstone industry known as peshgi in Rajasthan, a system of debt bondage that can become intergenerational and lead to child labor. Local mine owners pay the workers an advance amount at the commencement of their work, and due to the seasonal nature of their work, workers take on wage debt from employers to supplement their incomes. Workers do not receive a formal record of debt and must accept the word of their employers regarding the amount of outstanding debt that is often subject to a high rate of interest. As a result, workers fall into a cycle of debt that is subsequently passed onto their children. If the worker becomes sick due to the high rate of silicosis (a lethal but preventable lung disease afflicting many workers in the sandstone industry) or is unable to work due to occupational risks, their child will frequently take their place and be subject to a form of intergenerational bonded labor or indentured servitude.

Although some revisions to the law may be necessary to address these issues, there currently exists a legal and financial infrastructure in India to prevent bonded and child labor with mechanisms to provide remedy to survivors. The problem lies in its implementation and the attempts by some mine owners to evade the existing law by operating mines without the requisite license from the government. Article 23 of the Indian Constitution prohibits bonded labor and other forms of forced labor. The Bonded Labor System (Abolition) Act of 1976 formally abolished all forms of bonded labor, prohibited the act of compulsion, and prescribed the use of criminal penalties against companies. It also provides measures to extinguish liability to repay bonded debt under the peshgi system. India’s Supreme Court has repeatedly ruled that bondage laws cover victims who are working to pay off debts and those forced to work through deception and coercion.

The problem lies in its implementation and the attempts by some mine owners to evade the existing law by operating mines without the requisite license from the government.

Yet, with the continued existence of unregulated and unlicensed mines, workers are left without protection from the government. In addition, the report finds that workers are often unable to access judicial remedies because they do not have a formal employment contract with their mine’s owner or its labor enforcer. As such, their standing as litigants is oftentimes rejected by the Court, rendering workers unable to access justice through the existing legal infrastructure.

The Indian government has made attempts to address some of these concerns over the last two decades. Recently, the government enforced its prohibition on unlicensed mining by confiscating 27 truckloads of stone originating from an allegedly unlicensed mine in Rajasthan. Overall, to address concerns across industries, in 2016, the Indian government introduced a set of policies aiming to rescue 18 million workers from bondage by 2030, grant financial assistance, and provide child survivors with land, education, and housing. However, the Thomson Reuters Foundation found that rescued victims of child labor rarely receive financial compensation. Although government data suggests thousands have been rescued, calculations from the Thomson Reuters Foundation show that only 500 survivors had qualified for and received compensation as of March 2019, leaving millions without relief.

The U.S. is the fourth largest importer of Indian sandstone with nearly sixteen million dollars worth of the material being imported for sale in the U.S. annually. Accordingly, there are several U.S. agencies with the power to encourage the Indian government to focus its efforts on protecting the rights of workers in Rajasthan’s sandstone industry and improving their work conditions. For example, Section 307 of the Tariff Act empowers the U.S. Customs and Border Protection to stop shipments at the border of any products “mined, produced or manufactured, wholly or in part, in any foreign country by forced or indentured labor – including forced child labor.” The agency has increased its work in this area over the past year, issuing several withhold restraining orders or WRO’s since 2019. Moreover, the Department of Labor and the Department of State can investigate and collaborate with governments attempting to end child labor or forced labor in their borders under the Trafficking Victims Protection Act (as amended). Actions by these agencies could also encourage companies importing these products to take proactive steps to ensure that their supply chains are not marred by the kinds of forced and child labor found in the Center’s report.

Effective efforts to combat bonded and child labor in the Indian sandstone supply chain will require a nuanced approach to establish the right incentives to enforce the law. The focus must be on alleviating the situation on the ground through mass data collection that documents the true prevalence of bonded labor and child labor in addition to a public-private partnership between the sandstone industry, the U.S. government, and Indian authorities. Mine workers and owners should also be trained on financial literacy and legal obligations and duties with regard to worker protections, wages, children’s rights, and occupational hazards and safety under Rajasthani and Indian union law. The United States should support efforts to build the capacity of Indian authorities to enforce the existing law across the board as it pertains to bonded and child labor protections and ensuring access to justice by requiring employers to formalize relationships with employees through written worker agreements.

Effective efforts to combat bonded and child labor in the Indian sandstone supply chain will require a nuanced approach to establish the right incentives to enforce the law.

Nations across the E.U. have been working for over a decade on these issues in Indian-European sandstone supply chains. Based on a collective strategy among governments, corporations, and NGOs, there have been some improvements in the condition of workers’ rights in mines that are exporting to European consumers, including an apparent decrease in the incidence of child labor at some Rajasthani sandstone mines. The U.S. government and corporations alike should take note of a multi-stakeholder approach that has been somewhat effective to combat child labor in the sandstone industry in India.

As India has taken its place as a leader of global trade, improvements in market access should also be matched by improvements in the daily lives of workers. This will require collaboration and encouragement from their major trading partners like the U.S. and E.U. Yet, the impact that these partners could make is hampered by the existence of inter-agency and international silos of information and work. In the U.S., a collaborative approach between agencies empowered to enforce American international trade and labor laws is just as necessary as close coordination between the U.S. and E.U, agencies working with the Indian government to improve worker conditions in Rajasthan.

Outside of international and bilateral governmental enforcement of trade and labor standards, the public is an especially important stakeholder. A better-informed consumer base that knows about the concerns in Rajasthani sandstone may demand that importers and sellers engage in better due diligence standards in their supply chains. If civil society can engage consumers to confront importers and sellers, there would be additional pressure on business and governmetnal agencies in India to see a complete end to bonded labor and child labor in the sandstone industry.

The opinions expressed here are those of the authors. These statements have not been approved by the ABA House of Delegates or Board of Governors,  and should not be construed as representing ABA policy.

Dr. Waris Husain is the senior staff attorney for South and Southeast Asia with the ABA Justice Defenders Program. He is an adjunct professor of international law at the Howard University School of Law, from where he received his J.D. in 2011. Dr. Husain received his S.J.D. degree in 2017 and his LL.M.  in 2013 from American University Washington College of Law in 2017. You can follow him on Twitter at @warishusain.