LRA commander and former child soldier Dominic Ongwen’s forthcoming trial at the ICC risks obscuring the complex question of how to achieve justice when a victim is also a perpetrator.

The Lord’s Resistance Army (LRA) is a notorious armed group. It operated for two decades in northern Uganda. Dominic Ongwen was among its commanders. The LRA is currently depleted, exhausted, and out-of-commission. Its pernicious effects, however, still linger. And its leader, Joseph Kony, remains at large.

The LRA abducted children to staff its fighting and support units. Many of these conscripts – now adults – face an uncertain future. Their reintegration into the communities they had previously tormented is fragile. LRA fighters initiated widespread campaigns of rape, mutilation, and torture against civilian populations. While open to forgive, victims of this violence also call out for justice.

Ongwen himself entered the LRA as a kidnapped child soldier in 1988. He surrendered as Brigade Commander in January 2015 in the Central African Republic. He arrived shortly thereafter at the International Criminal Court’s (ICC) detention center in The Hague. On March 6, 2015, an ICC Pre-Trial Chamber postponed the date of his confirmation of charges hearing from late August 2015 to late January 2016.

The lines between victims and victimizers in atrocity often are porous.

The ICC has indicted five LRA leaders. Ongwen is the only one in custody. Another is dead. Three others (including Kony) remain at large (although one of them is probably dead too). Ongwen faces three counts of crimes against humanity and four counts of war crimes arising out of an attack on a displaced persons camp in 2004. These charges reflect only a tiny slice of what is believed to be his overall pattern of criminality.

Ongwen is among the more enigmatic of those indicted by the ICC. He’s presently 35 years old. He says he was abducted into the LRA at the age of 14 while walking to school. His claim is actually on the more modest side: plenty of other credible accounts pin his age of abduction as lower (as young as 9 or 10). Ongwen thereby suffered one of the crimes for which he now faces trial, that is, enslavement as a crime against humanity. But this paradox is not surprising. The lines between victims and victimizers in atrocity often are porous.

Some child soldiers, like Ongwen, become brutal leaders. Evidence of Ongwen’s coming of age in the LRA could mitigate his sentence. It’s impossible to disentangle who Ongwen is today from where he began as a teenager in the LRA. Ongwen is a prime candidate for what criminal law theorists might call the ‘rotten social background’ defense. Although Ongwen is being tried as an adult for what he did as an adult, he remains the youngest person in custody at the ICC.

Ongwen’s character is complex in other ways. Ongwen was apparently among the less abusive of the LRA leaders. He was capable of cruelty as well as mercy. He drank heavily. Kony nearly executed him on two occasions. Ongwen himself contemplated escape. He in fact let his several concubines escape with his many children. One of his ‘bush wives’ now calls for him to come home to Uganda and benefit from the amnesty the government gave LRA fighters to end the war. She says he was, just like her, taken into the LRA at ‘a tender age’. Accordingly, again just like her and thousands of others, he should be amnestied and forgiven. Some other Ugandans warm to this idea, including victims of violence perpetrated by child soldiers who wish for Ongwen to participate in reintegration ceremonies. Other Ugandans disagree, however, including former child soldiers who insist that Ongwen ‘went overboard’ and should be punished. The amnesty is perfunctory; forgiveness needs to be earned. And, to be clear, Ongwen deliberately chose extreme violence and sadism as a way to achieve power, status, and influence within the LRA. He killed to thrive rather than merely to survive.

Ongwen’s trial could serve the narrative function of unpacking the complexities of child soldiering. At present, child soldiering remains a poorly understood scourge particularly susceptible to simplistic thinking. By this I mean that the dominant vision of the child soldier is that of a faultlessly distraught, prepubescent African boy – barely able to carry weapons and keep his socks up – brutalized by crazed rebel groups. This image occludes as much as it clarifies. It is inadequate. Child soldiers, as I argue in my book Reimagining Child Soldiers, are found on every continent and emerge in conflicts world-wide (including recently used by ISIS, and by others in Syria and Libya). Most child soldiers, moreover, are adolescents. Many come forth willingly to fight for what they see as a legitimate political cause. There is great diversity in how children enter conflict and, once in conflict, what they do. Recognizing this diversity is essential to the success of individual reintegration. Roughly 40% of child soldiers world-wide are girls, many of whom are sex slaves but some of whom are combatants and unit leaders. 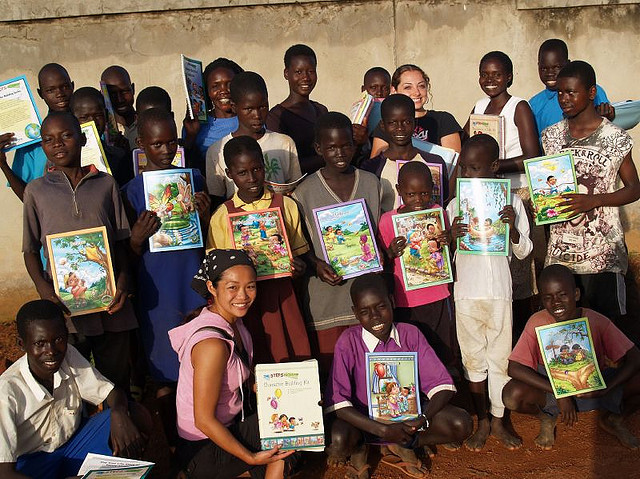 Ex-child soldiers and abductees in Uganda.

I fear that, by focusing the eyes of the world community on a boy soldier who became a leader of an infamous African rebel group, the Ongwen proceedings will reinforce sensationalism. It would be a shame if criminally prosecuting a former child soldier ended up diverting the gaze of the international community away from the complexities of child soldiering. It would be a greater shame if the Ongwen prosecution transfixed that gaze towards well-worn stereotypes. This could happen if the defense presents him only as an innocent child, and the prosecution responds by starkly ignoring the fact that he had entered the LRA as a child and came of age in such a dismal setting.

Hannah Arendt famously wrote in Eichmann in Jerusalem that, in the end, the criminal trial is about the guilt or innocence of the one defendant in the dock. Her point is well-taken. But trials can also serve didactic and pedagogic purposes. They educate, they explain, and they illuminate. Furthering this goal means, in the case of Ongwen, that the trial needs to get to grips with the realities of child soldiering. Perhaps this goal is too nuanced to square with the reductionist pressures of the courtroom; perhaps it is too delicate to survive the adversarialism that inheres between prosecution and defense where the winner takes all; perhaps it is too distant from other aspirations such as deterrence and retribution. But, in the end, I think it is important to try. Child soldiering can’t be stopped without first being properly understood.