Romanticizing the universal at the expense of local, subjective truths fails to account for how we arrive at global rights in the first place. 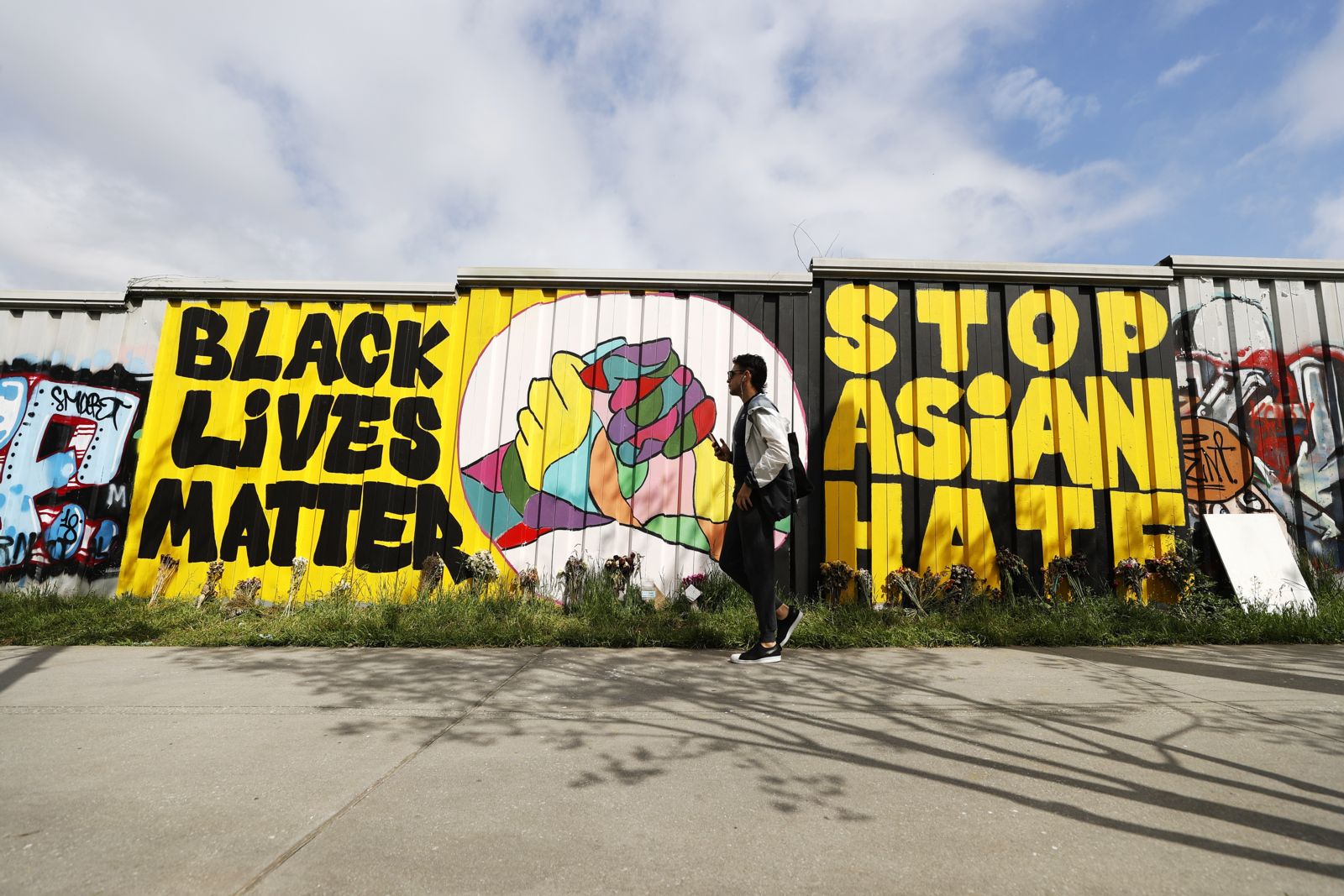 A man walks past a mural created by two groups 'Bad Asian' and 'Civic Walls' advocating for the BLM movement and an end to Asian hate near Krog Street Tunnel in Atlanta, Georgia 30 March 2021. EFE/EPA/ERIK S. LESSER

*Note: This article is a response to a recent article in OGR by Nicolas Agostini.

“Cancel culture” and “woke” are trendy mudpacks in today’s semantic and political combat over the global state of human rights. As civil society comes to embrace hitherto marginal actors, from Black Lives Matter to First Nations and sexual minority groups, the old guard sheds tears over the “loss of the universal.”  No surprise there, if the old guard were simply far-right haters who find all equality claims to be problematic.

But what about traditional left-leaning folks who lament “excessive identity politics?" Nicolas Agostini, for example, decries the obsession with “identity, subjectivity and lived experience” at the expense of “objectivity and empiricism” that undergird universal human rights.

In the traditional story, an overriding set of moral principles puts human rights above the particulars of our varied experiences. No matter what the economic, social, and political realities, a global set of norms enshrined in law is transcendent. Minorities who assert their ethnic, gender, cultural, religious, sexual, or class-based identities get in the way of that universalism. They are “trapped in their own subjectivity,” says Agostini, and take the human rights movement down the path of “social atomization.” The “harm” that is central to how law and ethics play out has become too personal “as a valid test for restrictions on rights.”

Romanticizing the universal at the expense of local, subjective truths fails to account for how we arrive at global rights in the first place. There is a context-rich reality, past and present, to why we seek to take rights seriously.

What’s wrong with the official story?

From Magna Carta to the French, American, and Universal declarations, it’s specific identity groups with their economic, social, and political obsessions that have driven claims of “universality.” The barons who brought King John to heel at Runnymede had about as much concern for the rest of feudal England as Parisians who asserted the “rights of man” had about Haitians, and the rest of their colonies. On whose behalf did American slave-owning elites proclaim the equality of citizens? Jacques Maritain, the French-Catholic intellectual who deeply influenced the “universal” in the 1948 Declaration, understood its limitations well. Hence the need for what John Rawls came to call an “overlapping consensus” that sits at the heart of a quest for justice.

The idea that there is an “objective” or “empirical” standard that’s the measure of human rights or justice for all time and all places is anti-pluralist. Parochial western experiences laid claim to those qualities in the colonial era, and still do today. Typically, for example, the COVID-19 slogan runs: “we are all in this together.” Tell that to the three-quarters of the world’s population that has yet to receive a single dose of any vaccine. But don’t we have a universal benchmark against which to measure the unequal distribution of the vaccine? “Identity groups” remind us what the benchmark is worth against the vaccine nationalism of the rich (and of nationalists in places like Israel-Palestine). Universal principles depend on the particulars of human experience.

When I ask my undergraduate students about the value of free expression at the start of my International Human Rights course, most opt for the “absolute” end of the spectrum. Lately, with COVID-19’s pandemic of misinformation on social media, along with the level of hate messaging on race around Donald Trump’s electoral defeat, there is some hesitation among my students about being absolutist.

We talk about Myanmar’s Rohingya minority being targeted by majoritarian fanatics on Facebook, and the genocidal consequences; and Rwanda’s Tutsi being similarly targeted on radio; and Nazi cartoons about Jews. We watch Henry Louis Gates’ Reconstruction, on the long history of white caricatures about African-Americans that accompanied Jim Crow.

This is when my students get why the International Covenant on Civil and Political Rights, derived from the 1948 Declaration, is shot through with exceptions to absolutism.

“Any advocacy of national, racial, or religious hatred that constitutes incitement to discrimination, hostility or violence shall be prohibited by law,” says Article 20. The traditional narrative stresses “incitement” and links it to violence—as if this had nothing to do with the dark history of hostility and discrimination.

As civil society comes to embrace hitherto marginal actors, from Black Lives Matter to First Nations and sexual minority groups, the old guard sheds tears over the “loss of the universal.”

True, Article 19 says that restrictions to free speech “shall only be such as are provided by law and are necessary.” What “objective” or “empirical” standard is this about?  Legal reasoning is typically embedded in local political cultures and realities, even on a matter as basic as equality. US courts found “separate but equal” to be consistent with the constitution’s equality principle for nearly a century. Today that legacy plays out in voting rights across a dozen US states, with the complicity of the courts. It is identity groups that shift the previous identity narrative (of the privileged posing as “everyone”).

The Charlie Hebdo affair is routinely invoked by free speech absolutists as evidence of identity politics run amok, as if there were no difference between targeting a minority (French Muslims, Islam in Europe) and a majority. To cast this as being about secularism and a critique of religion is rather like claiming that antisemitic cartoons around Kristallnacht were about social justice. Subjective experience isn’t an adjunct to universality, of value only when it extends the reach of general rules. It’s the subjective that repurposes earlier norms, to legitimize an aspiration to universality.

In Nobel-laureate Kazuo Ishiguro’s latest novel, Klara and the Sun, we are drawn into the world as seen by an intelligent robot—often more sensitive than the humans whom she serves as an “Artificial Friend.” From her display for sale in a store, to her casual dismissal by owners from assorted spaces that she inhabits, one can’t help but recall the history of slavery. Does this harken to a future where AI machines have claims to our humanity, even to rights? What qualifies us as different?

The Universal Declaration and the Covenants that stem from it offer no wisdom in that regard.  Nor do those milestone documents have anything of substance to say about future generations, as public philosopher Roman Krznaric observes in The Good Ancestor (2020). From digital privacy and surveillance, to First Nations’ and minority rights, to environmental justice and equity, it is the demands of identity movements that redefine the ethics of being human. And as worthy of universal practice.

Amyn Sajoo is scholar-in-residence at Canada’s Simon Fraser University, where he lectures in human rights and global politics. He served as policy advisor with the Canadian Human Rights Commission, and his fieldwork has taken him across Asia, the Middle East, and East Africa.