It is time for governments to rescind repressive measures and laws, and to ensure the inclusion of civil society actors in response to pandemic recovery efforts. 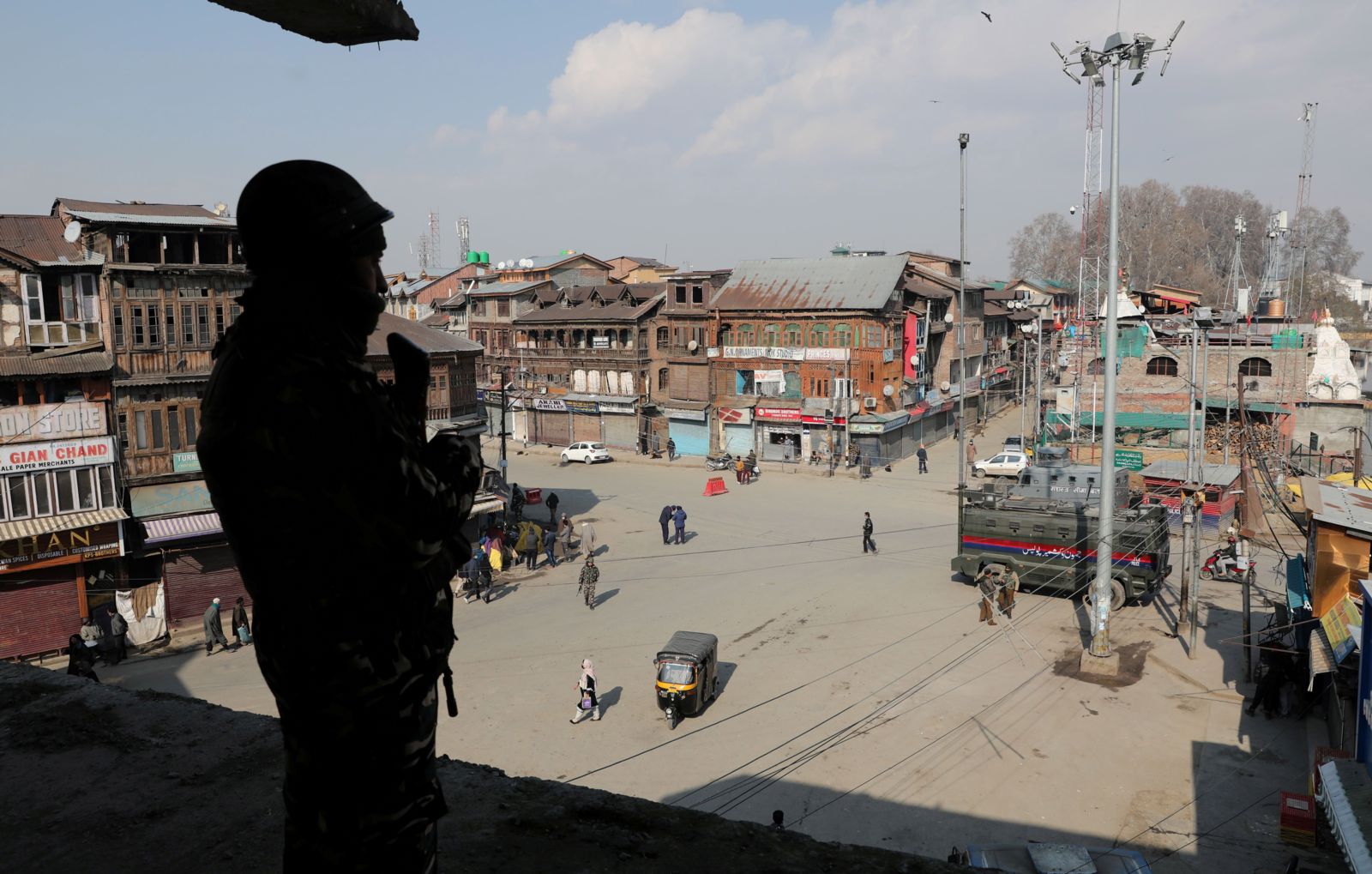 An Indian paramilitary soldier stands guard at the top of a building near a closed market during COVID-19 lockdown in Srinagar, Kashmir, India, January 2022. The Jammu and Kashmir government imposed a weekend lockdown in the region in view of a consistent surge in COVID-19 cases. The weekend curfew will remain in force till 6 am Monday to contain spread of the virus. EFE/EPA/FAROOQ KHAN

While many measures were legitimate and necessary to address the public health crisis, several governments, democratic and non-democratic alike, took advantage of the pandemic to expedite repressive legislation and implement vague measures that could be used to infringe on human rights and fundamental civic freedoms.

As the world marks two years since the start of the pandemic, it is time for governments to rescind these repressive measures and laws, and to ensure the inclusion of civil society actors in response to the pandemic and post-pandemic recovery efforts.

Although article 4 of the International Covenant on Civil and Political Rights (ICCPR) permits States to declare states of emergency, they must be temporary in nature, prescribed by law, necessary, and proportionate. Many governments, however, passed measures that impermissibly restricted people’s rights and freedoms, at times indefinitely.

For example, in Algeria, Eritrea, and Mexico, the governments “issued blanket bans with no expiration date,” curtailing the right to freedom of peaceful assembly. In Turkey, the government issued an executive order prohibiting civil society organizations from arranging even online general assembly meetings. And in Hungary, the government not only issued a total ban on protests, but also authorized military forces to enforce the ban and impose penalties up to €1400 for participating in banned demonstrations.

Furthermore, in January 2022, the government of Tunisia imposed new COVID-19–related restrictions banning all public gatherings. Without legislative oversight, these emergency measures were left unchecked with a profound impact on the rule of law and democratic governance in the long-term.

In other countries, governments targeted human rights defenders through “misinformation” or “fake news” legislation. Although the UN Special Rapporteur on the Promotion and Protection of the Right to Freedom of Opinion and Expression clearly notes that the right to freedom of expression applies to information irrespective of the truth or falsehood of its content, governments enacted vaguely and broadly defined laws to justify the curtailment of the rights to freedom of expression and opinion under the pretext of fake news.

For example, in Zimbabwe, the government issued an order penalizing anyone who publishes or communicates ‘false news’ with a fine equivalent to nearly $20,000 USD and/or up to 20 years imprisonment. In Vietnam, the government relied on the Law on Cyber Security to adopt a decree prohibiting the spread of ‘fake news;’ the decree imposes fines up to roughly $853 USD. The underlying law broadly defined ‘fake news’ to include incorrect or misrepresented information, as well as slander and insult to a person’s honor and dignity.

Under the same pretext, health workers, journalists, and rights advocates and critics were arbitrarily detained and subjected to physical harassment and intimidation. In countries like Algeria and Brazil, authorities allegedly detained, arrested, and physically assaulted journalists who reported on COVID-19. Authorities also used these measures to target healthcare workers who contradicted government reports on the spread of virus and number of cases.

Furthermore, de facto measures have included the deployment of military forces to enforce lockdown measures, selective or disproportionate enforcement, use of surveillance, and police brutality. In March 2020, the governments of Jordan and Lebanon deployed military forces to enforce lockdown orders. In October 2020, Poland’s military and riot police used excessive force to respond to the anti-abortion protests.

Often, these exceptional powers become the norm. Human rights defenders have, therefore, resorted to litigation and non-litigation responses to push back against the normalization of these repressive practices and protect civic space necessary to fulfill their mandates.

A recent report published by the American Bar Association Center for Human Rights documents human rights defenders’ effective responses to push back against these restrictive measures. Civil society actors undertook a variety of strategies depending on the degree of respect for rule of law and the independence of the judiciary.

The strategic litigation approach, which challenged the legality of measures, saw varied success. However, as seen in India, Israel, Malawi, and the United Kingdom, courts emphasized that restrictions on fundamental rights must be proportionate, necessary, and non-discriminatory noted in the UN Human Rights Committee’s General Comment 29.

Further, where governments curtailed the right to freedom of expression using repurposed laws, the success of legal challenges largely depended on the nature of the underlying law and scope of enforcement. For example, courts in Brazil and India found that criminalized speech was protected by the constitution and that the government action exceeded the scope of the re-purposed statute.

Despite these daring challenges and restrictions, civil society actors have played a critical role in efforts to respond to the pandemic.

Of these measures, social media campaigns were widely effective, in part because social media provides human rights defenders with platforms not only to mobilize public opinion against government suppression of fundamental rights and freedoms, but also to engage in pandemic response efforts.

Despite these daring challenges and restrictions, civil society actors have played a critical role in efforts to respond to the pandemic. For example, civil society organizations undertook initiatives to mitigate social and economic impacts of the pandemic restrictions on individuals and marginalized groups. In order to meet the needs of communities, they addressed the void in essential service provisions in many instances while sustaining connections between local and global efforts in responding to the pandemic.

The coming period will be crucial. Several laws and restrictive measures and practices are likely to remain. Governments should gradually end and repeal repressive legislation and measures. The role of legislative bodies should be restored to review all laws and measures and ensure proper oversight. Civil society actors, including human rights defenders, should continue to systematically monitor and document COVID-19 related measures that infringe on human rights, and strategically pursue legal actions to challenge their legality.

A meaningful engagement with civil society actors would ensure that COVID-19 related state of emergency restrictions are used to respond to legitimate public health emergencies and not used to silence critical and dissent voices.

*The views expressed in this commentary represent the opinions of the authors. They have not been reviewed or approved by the House of Delegates or the Board of Governors of the American Bar Association and, accordingly, should not be construed as representing the position of the Association or any of its entities.

Sally Alghazali is a J.D. Candidate at George Mason University Law School 2022 and editor-in-chief of the International Law Journal.