With climate litigation, seemingly minor interventions in the legal realm can have a butterfly effect and generate major social and cultural transformations. 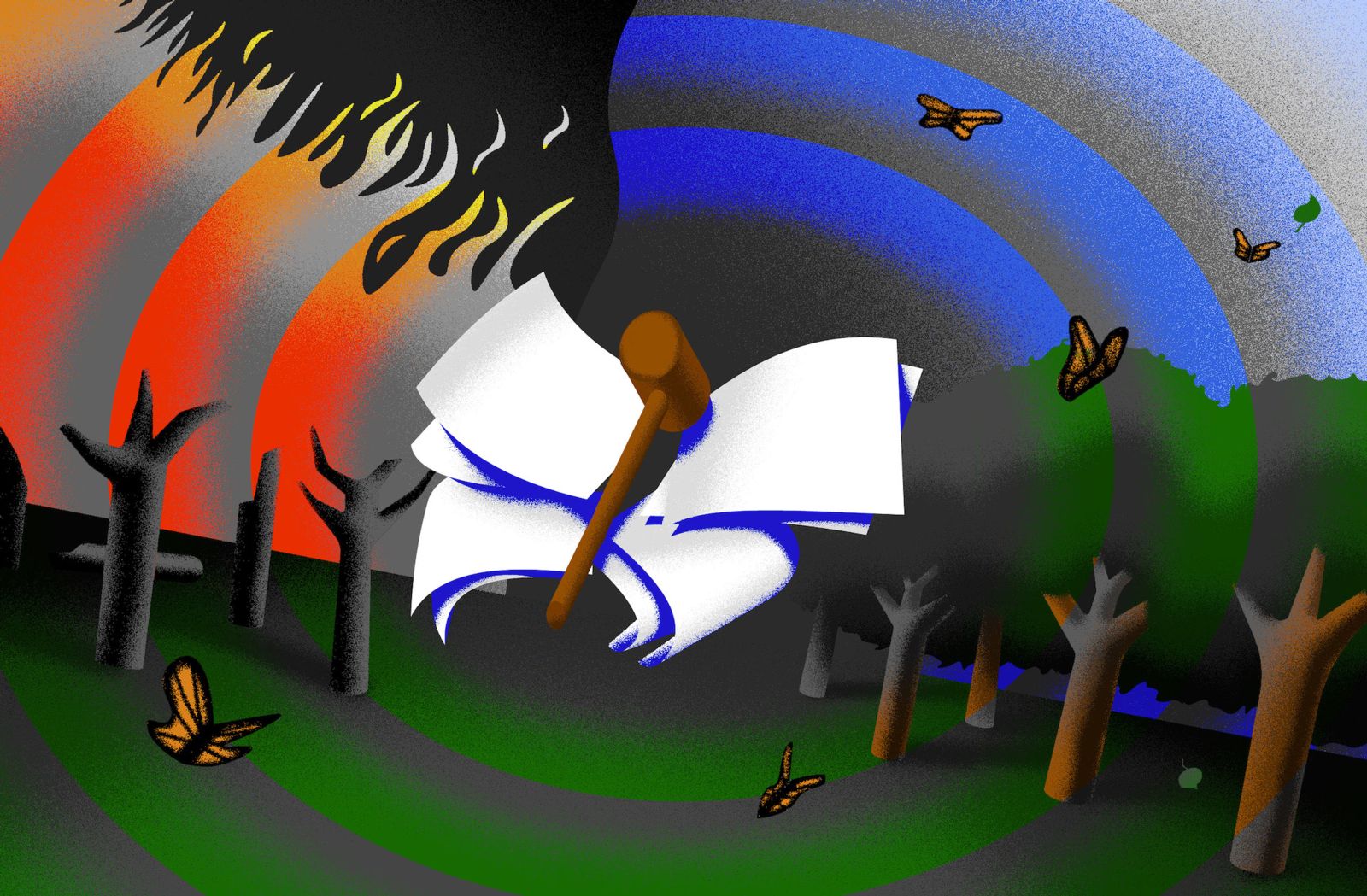 There are many ways to litigate climate change. Using constitutional rights, international law, claims for damages and administrative regulations, climate cases create space within existing law to include climate change concerns into the adjudicative practice. At the core, all cases discuss the duty of governments and private actors to take precautionary measures—to avoid the accumulation of greenhouse gases in the atmosphere, and to protect us from the negative impacts of what already is accumulated.

People increasingly go to court to hold governments accountable for climate related responsibilities, and courts have responded, including by calling governments to self-restraint in relation to—previously unquestioned—activities that cause climate change.

In her book “Butterfly Politics”, feminist legal theorist Catharine MacKinnon argues that seemingly insignificant actions, through collective recursion, can intervene in unstable systems to produce systemic change. Seemingly minor interventions in the legal realm can have a butterfly effect that generates major social and cultural transformations. Similarly, we suggest that the bottom-up regulatory regime created by the Paris Agreement has the potential to lead domestic courts to do butterfly climate judging.

Rather than waiting for the perfect international climate change treaty to tackle the problem, courts have accommodated existing legal norms and doctrine to novel climate issues, creating important precedents from which a climate jurisprudence is evolving. Although climate change has been considered too abstract and speculative for courts to handle, existing legal frameworks are adapted to accommodate and even mainstream climate change in routine decision-making. While still diverse, uneven and produced in different legal systems, we should not overlook the contributions of this emerging jurisprudence to transforming the collective action problem that is climate change.

Seemingly minor interventions in the legal realm can have a butterfly effect that generates major social and cultural transformations.

Since the early 1990s, when the first cases were brought to court, climate jurisprudence has developed from rejecting climate claims as speculative, to using the reports from the Intergovernmental Panel on Climate Change (IPCC) to prod governments into making better-informed decisions, including on fuel efficiency standards, greenhouse gases emissions from coal power plants, licenses for extractive projects, airport expansions, housing projects on coastlines endangered by sea level rise, deforestation policies, climate mitigation targets, industrial use of water sources when climate resilience is at stake, and market incentives for renewable energy projects.

With the use of the IPCC reports as legal proof, judges around the world find ways to establish, case by case, what type of legal problem climate change is: a human rights problem, a problem of atmospheric pollution, inadequate environmental impact assessment (EIA), sustainable development, biodiversity protection, equity with future generations and other species, or a problem of market failure for renewables, to name a few. Furthermore, by settling the debate about the validity of climate science in public decision-making courts have established climate change as a collective action problem that requires regulatory interventions.

Some courts have expanded the meaning of notions such as pollution, EIA, and development planning, to make them workable for climate change mitigation and adaptation. While litigation is no panacea, through cross-application of precedents, climate jurisprudence can make small, simple interventions into political systems, and eventually, contribute to system-wide changes.

However, the jurisprudence still falls short. It struggles to take sustainable development seriously when faced with economic arguments, and while accepting climate science and the human rights risks involved, many courts still find that existing domestic policies are good enough, or within the government’s discretionary power. The jurisprudence has also centered mainly on rights declarations and norms violations, failing to provide remedies and monitoring mechanisms to improve compliance with rulings. There are still few signs of democratic experimentalism and participatory implementation of solutions, which could encourage the cooperative relations among branches of power needed to address super wicked climate problems.

If applied in new cases across countries, modest but extraordinary precedents have the potential to make interventions into what is an unstable political system, and—hopefully—effect changes in the global atmosphere.

Despite these shortcomings, courts are overcoming fundamental barriers to dealing with climate change. By using IPCC reports as solid proof, they have overcome the challenge of uncertainty over the existence of climate change and the risks it poses for human rights—even where governments deny climate change, the judiciary, significantly, does not. They have also dealt with the drop in the ocean argument, acknowledging the cumulative nature of both the causes and potential solutions to climate change, concluding that in complex global problems all contributions matter.

Thanks to these analytical advances, courts have created important precedents that can be used by other courts confronted with similar cases:

Most judges do not decide cases in spectacular, precedent-breaking ways, or treat climate change as an exceptional legal problem. Instead, they normalize climate change adjudication by using existing legal frameworks.

The courts’ most radical contribution has been to make climate change tangible and routine. If applied in new cases across countries, modest but extraordinary precedents have the potential to make interventions into what is an unstable political system, and—hopefully—effect changes in the global atmosphere. But as with the butterfly effect, it will be impossible for future analysts to trace atmospheric changes to any public policy or court case. What concerned litigants can do is aim for butterfly judging, seeking to positively affect the global climate system, one court case at the time.

Catalina Vallejo is a lawyer from Colombia and a postdoctoral fellow at the Faculty of Law of the University of Bergen, where she studies the polycentric governance of climate change in the Amazon, as a member of the interdisciplinary research project “Causes and Consequences of the Legal Architecture of Climate Politics” (LEG-ARCH). She is affiliated as a researcher with the Universidad Autónoma Latinoamericana-UNAULA in Colombia and with LawTransform in Norway.

Siri Gloppen is a professor of Comparative Politics at the University of Bergen (UiB), Norway, and a senior researcher at the Chr. Michelsen Institute and Director of LawTransform the CMI-UiB Centre on Law & Social Transformation. Her research focuses on lawfare – the use of rights, law and courts as tools for social change – and the effects of lawfare strategies in different fields and across contexts, particularly in Africa, Latin America and India.