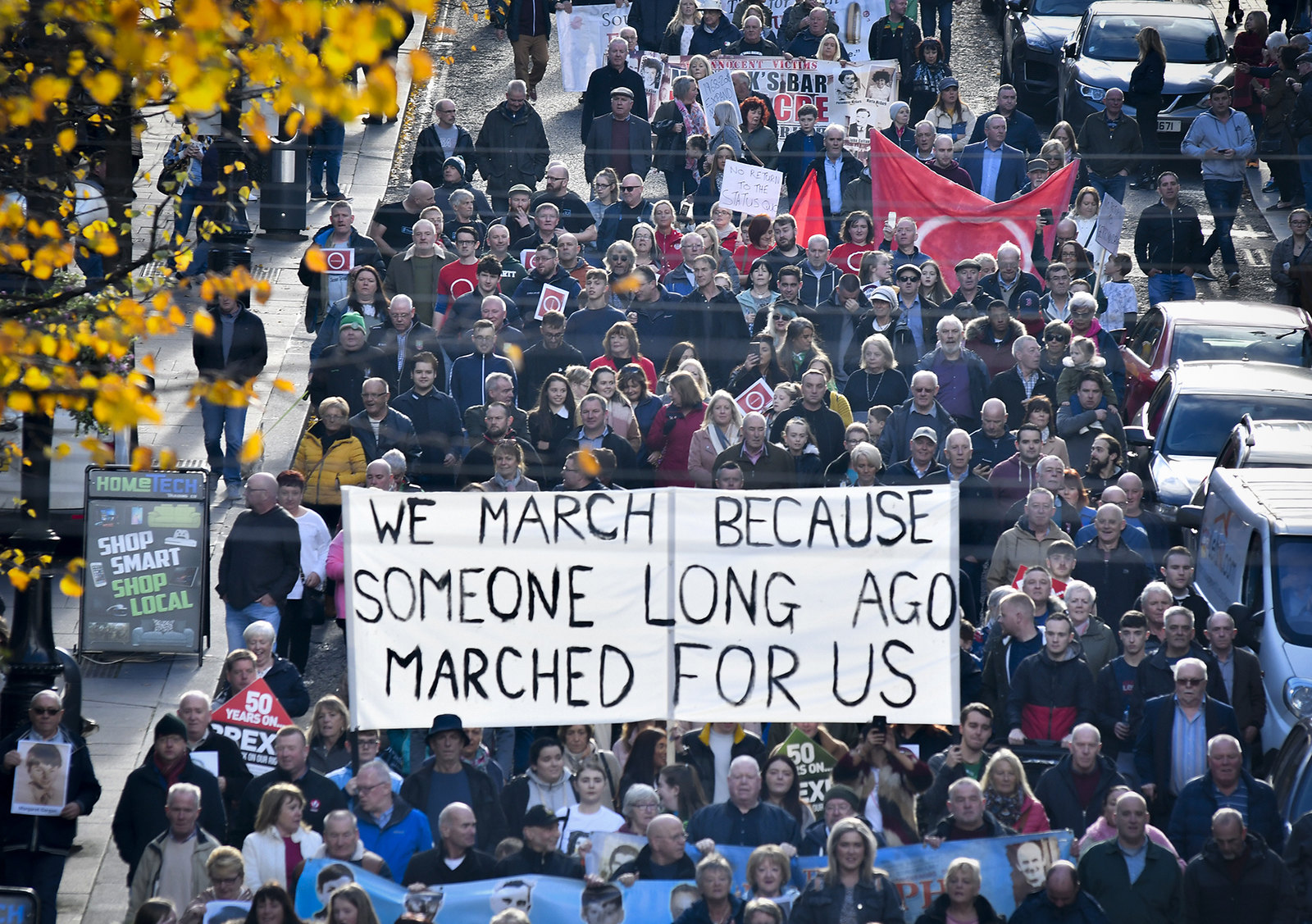 Thousands of people lined the streets of Derry to march for equality and to mark the 50th anniversary of the 'October 5th 1968' Civil Rights march from Duke Street in Derry.  Sinn Féin/(CC BY 2.0)

Economic and social rights defy easy categorisation. They are, I suggest, what W.B. Gallie called “essentially contested concepts.” That means we can best appreciate what socio-economic rights signify by comparing our uses of them now with other earlier uses.

Considering socio-economic rights as contingent historical phenomena with fluid meanings allows for more open forms of historical inquiry. Especially important to critical historiography is whose voices we choose to listen to.

Part of a world-revolutionary wave, a decade of popular action immediately preceded the formation of the independent Irish Free State in 1922. The dominant historical understanding of this period centres on nationalism and the nation-state, in particular, the Irish Republican Army’s guerrilla war for independence from the United Kingdom and the rise of the nationalist mass party, Sinn Féin.

Less well known is the extent to which nationalist bargaining power and military capacity owed to organized labor and agrarian unrest. Between 1918 and 1923, five general strikes and eighteen local strikes occurred. Workers seized control of more than eighty workplaces, creating some of the first-declared Soviets outside of Russia after 1917. In the countryside, local rent strikes escalated into expropriation of estates. A network of popularly elected, local arbitration courts emerged, sometimes to decide new terms of land ownership.

Worldwide, anti-systemic movements explicitly articulated social and economic rights. Many labour organizers, including those who drafted the Constitution of the Irish Citizen Army (1913), were inspired by syndicalism which appeared in Ireland at the same time as in Catholic Western Europe—France, Spain, and Italy—and in the United States.

The foundation of the Irish Free State in 1922, however, signalled an end to radical-democratic experiments. Left-wing trade unionists, feminists, and socialist republicans now faced the hostility of an entrenched Catholic bourgeoisie and a dominant Catholic Church.

Nevertheless, they persisted. During the Great Depression of the 1930s, there occurred mass boycotts of land annuities in the countryside, the Irish Women Workers Union campaign against slum landlordism in Dublin city, and prolonged strikes involving thousands of workers in transport and construction across the country. Contemporary left-wing socio-economic rights discourses, as featured in the Constitution of Saor Éire (1931) or the Programme of the Republican Congress (1934), now more closely reflected Bolshevik rather than syndicalist models of workers’ control.

In both drafting processes, however, socio-economic rights were substantially omitted. Strikingly, the archives show how constitution-makers’ deliberately redrafted robust socio-economic rights provisions, substituting state obligation based on justice for state paternalism based on charity towards ‘the weaker sections.’

In 1937, the socio-economic rights discourse proposed by clericalist contributors resembled and drew upon the Catholic corporatist and authoritarian constitutions of Portugal (1933), Austria (1934), and Poland (1935). Several Irish Catholic bishops effectively imagined a colder, wetter version of the Portuguese dictator Salazar’s Estado Novo. Clericalists influenced the constitution’s articulation of a nationalist, often specifically Catholic, culture, notably in its provisions pertaining to the family.

Ireland’s socio-economic rights constitutionalism followed the conservative postcolonial trajectory critiqued by Franz Fanon, in which a nationalist party substitutes itself for a mass anticolonial and social movement. Fundamentally, a detached complicity held sway between would-be nation-state builders and the international market economy.

In both 1922 and 1937, eliminating robust socio-economic rights satisfied the Department of Finance’s preferences for minimal state spending. For Ireland’s banking and grazier farming interests, devolving responsibility for welfare and education to the Catholic Church was both pious and cost-effective. The Irish state thus reproduced a peripheral economic relationship with the UK. The resulting absence of a solidaristic, rights-based model of social policy development proved enduring.

To this day, the Irish state has consistently interpreted socio-economic rights as expressions of formal entitlement in public services, dependent on economic growth rather than determinate human rights standards. The state has further opposed the provision of effective means of redress to individuals or groups alleging violations of those rights. Unsurprisingly, the notion that diverse social groups have to ‘struggle’ and ‘fight’ for their rights is a consistent theme in Irish social policy development.

Interwar constitutionalism thus remains subject to contestation. Contemporary political parties and civil society movements continue to mobilize for constitutionalizing socio-economic rights, notably to decommodify water and housing. Survivors of Ireland’s Magdalen laundries and industrial schools continue to demand justice following egregious human rights abuses by church and state. The state’s treatment of asylum-seekers illustrates most clearly how much of Ireland’s carceral past remains present. A people’s history shows that it did not (and does not) have to be this way.

History “from below” maps what Murray Bookchin identified as a distinction between ‘politics,’ the civic participation needed to determine how we can best live together, and ‘statecraft,’ the techniques of repression and manipulation required to bolster hierarchy, exploitation, and oppression. In this sense, past movements trace a political path to realizing socio-economic rights.

By foregrounding the lives and movements of the dispossessed and the discontented, a people’s history of socio-economic rights sheds light on society-centered forms of justice, illuminating ways of realizing rights against and beyond the deep structures of power that shape our world.

Direct actions such as boycotts, strikes, and community self-government typically advance an alternative vision of selfhood, citizenship, and rights, one that assumes free individuals have the capacity to manage social affairs in a direct, ethical, and rational manner. Today, facing linked, global crises of capitalism, social inequality, and ecological collapse, we can turn to movement histories for wisdom and inspiration. In the end, which vision of socio-economic rights prevails is up to us.

Dr. Thomas Murray is the author of Contesting Economic and Social Rights in Ireland: Constitution, State and Society, 1848-2016. His Twitter handle is @tomasomuiri.