This women-led movement in Madagascar is resisting extractive development projects on the island, in exchange for alternatives that respect the land and the indigenous Mikea community. 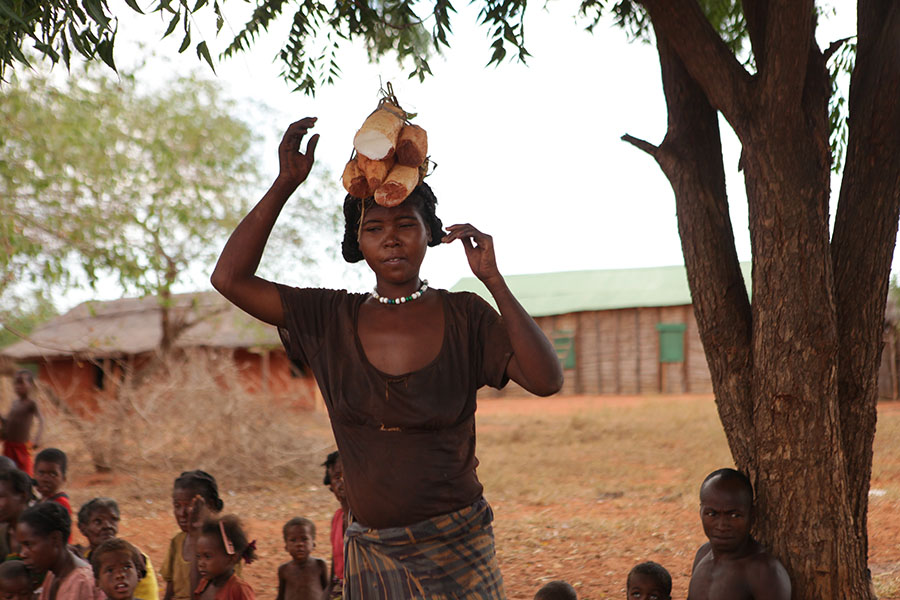 Mikea woman in Madagascar carrying tubers of the Baboho, which are the Mikea staple food that is gathered in the forest. Photo courtesy of CRAAD-OI

Madagascar emits 0.1 tons of carbon dioxide per capita, making it one of the lowest producing countries of carbon dioxide in the world.On the contrary, this so-called “big island” is a biodiversity hotspot comprising valuable and sensitive ecosystems that have been seriously compromised by climate change, with more than 1,865 species threatened with extinction, including 80% of vegetal and animal species endemic to the country. According to the Global Climate Risk Index 2020, Madagascar is the fourth most affected country in the world  by global warming, adverse weather events, and other climate risks threatening unique animal species and large numbers of poor and vulnerable communities representing 80% of the population.

Against the backdrop of widespread degradation of the country's natural environment, the Malagasy Government's development and growth agenda continues to focus on the promotion of the extractive and agro-industry sectors, as well as the development of the blue economy and the establishment of Special Economic Zones dedicated to foreign investors. As a result, these development strategies are characterized by their worrying ecological footprint and recurrent land grabbing – all at the expense of communities that are raising their voices to say ‘No’ and demand alternatives to this development model that safeguard their lands, resources, and livelihoods.

The threat posed by this development model to local communities and ecologies is enormous. In all regions of Madagascar, land grabbing is aggravated by the adoption of laws on Special Economic Zones (SEZs) and Tourist Land Reserves, as well as by biodiversity offset projects implemented by transnational companies like mining giant, Rio Tinto, in collaboration with international NGOs. Transnational companies along with the Malagasy State benefit the most from these projects, all at the expense of affected communities and their territories.

Transnational companies along with the Malagasy State benefit the most from these projects, all at the expense of affected communities and their territories.

For many years, communities in Madagascar have fought against the Australian-owned, ilmenite mining operation, the Base Toliara Project. The resistance has been spearheaded by a women-led collective, CRAAD-OI and FARM (Femmes en Action Rurale de Madagascar), a federation of rural women’s groups from the affected communities. Both groups oppose the project because it threatens their way of life and the Mikea Forest, which plays a vital role in the daily life of the Mikea people—spiritually, culturally, socially, and economically. Among the poorest people in the world, the Mikea indigenous people have limited access to marketed commodities, medical care, education, and other public services, and almost no voice in regional or national politics.

Despite being met with resounding opposition from the start, the Malagasy government still issued the company a mining license and an environmental permit.

The government also declared Base Toliara a “public utility” in July 2018. Affected communities then mobilized continuous protests and demonstrations involving thousands of people. Discontent came to a head when a group of forty community members allegedly burned and vandalised the mine’s exploration camp. Nine of those were arrested in May 2019, and charged with arson, destruction of property, and forming a mob. They were only convicted on one charge and released in June with a six-month suspended sentence.

In November, the Malagasy government suspended all operations and communication activities of the Base Toliara mining project, because of “opposition from local communities and unfavourable terms for the people and government.” However, supporters of the mining project, including  local authorities and individuals who enjoy financial and material benefits from Base Toliara, have continued to minimize opposition, while using the promise of jobs, money, and other enticements to foster divisions within the local communities.

Despite the suspension of all Base Toliara’s activities in 2019, in 2020, Base Toliara flouted the edict, using the onset of the COVID-19 pandemic as a pretext. The company’s promoters claimed moral authority based on the “significant” financial contribution that they made to the government for the fight against the pandemic. But the women from the 12 communes affected by the mining project, supported by the majority of the 200,000 inhabitants, refused to stand down.

Retsiva is a member of the Mikea people of south-west Madagascar. She, along with women activists in her community, have waged a long war against the ilmenite mine since it was first proposed as early as 2012. The Base Toliara mining project obtained a license from the government of Madagascar on one mining and three exploration properties, covering a total of 40,753 hectares, which enclose the territories of 12 communities. These mining concessions cover several environmentally protected areas, including the Mikea Forest. At least half the forest is home to several endangered animals, including several species of lemur.

In the southwestern region, where the Base Toliara project is being established, the Mikea indigenous women and the community live almost entirely from hunting and gathering in the Mikea Forest. For these women, the forest is sacred and must be used with moderation and respect for the spirits who live there. Those affected by the large-scale mining operations are subjected to the restrictions on land and forest-use associated with the establishment of the mining and offset projects. The gendered division of labor often means that women are seen as primary food gatherers, water providers, care-givers—roles heavily affected by mining activity. When agricultural land is no longer available, women’s work burden is likely to increase in order to provide for their families and community.

Base Toliara’s efforts to get the government to lift the suspension have continued over the last few months. In April 2020, the company made donations to the local COVID Operation Centre of Toliara and was praised by its promoters as one of the main contributors to the fight against the pandemic.

The company has also threatened those who critique its actions. In May 2020,  the local TV channel Ma-TV released a documentary on how children have been affected by Base Toliara’s activities and also pointed out that the company was flouting its suspension. Both the journalist and the TV network have been threatened with legal action by Base Toliara for releasing the documentary.

As Malagasy laws do not yet provide sufficient protection for communities’ rights, such as free, prior informed and continued consent, affected communities have to find ways to make their voices heard. The affected communities in Toliara, led by women activists, continue to voice their opposition to the Base Toliara project and to fight for a permanent ban of the mining company on their lands. “We will not give our lands to them even if they kill us or shoot us,” activists have said. “And we will not run away either because we are defending our territories.”

Over the last decade, there have been more protests in the country due to the lack of social acceptability towards agri-business and mining projects. Frontline communities are fighting to reclaim sovereignty of their land and natural resources. To claim the right to say ‘No’ to destructive development models, and to say ‘Yes’ to life and the preservation of their ecosystems, biodiversities, and territories.  In support of affected communities, CRAAD-OI and FARM continue advocating for the transition to development alternatives that would not be harmful to communities and the whole Malagasy biodiversity and ecosystem, and which would effectively benefit both affected communities and the Malagasy State. The definitive shutdown of the Base Toliara Project and closure of similarly destructive projects is just the first step.

Volahery Andriamanantenasoa is a human rights specialist and  the current program director of CRAAD-OI, a non-profit independent Pan-African organisation based in Madagascar.

Maggie Mapondera is a feminist activist and communicator who has supported feminist movements across Southern Africa for ten years by facilitating creative ways to document human experience andstruggles for justice. She works for WoMin African Alliance, a Pan-African ecofeminist organisation.