For many Global South activists and communities, whose realities are already plagued by climate variability and change, the pledges and actions agreed upon at COP26 were too late, inadequate, and exclusive. 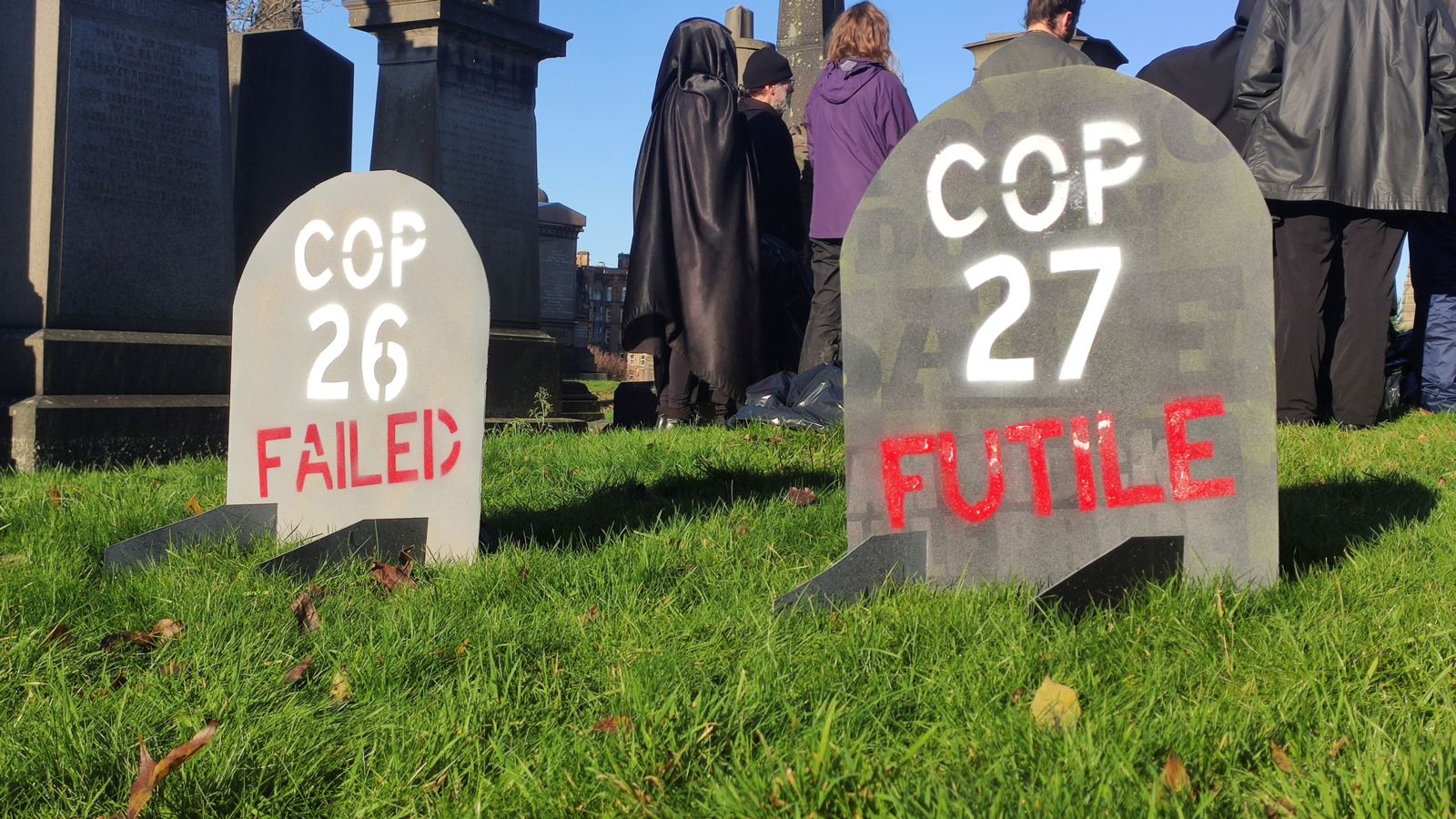 Artivists" from the NGO Extinction Rebellion officiated in the cemetery of the city of Glasgow a symbolic funeral for the COP26, which is "dead" in their opinion due to the lack of ambition of the world leaders. EFE/ Guillermo Garrido

Depending on who you ask, the United Nations Framework Convention on Climate Change (UNFCCC) COP26 climate conference which took place in Glasgow, Scotland in November 2021 could be described as either an epic failure or a step in the right direction. The UK government initially purported that COP26 would be the most inclusive COP Climate summit to date.

As the first large multilateral convening since the beginning of the COVID-19 pandemic, the conference was expected to address climate-related challenges and issues, particularly in the Global South, with high expectations of tackling the ongoing climate emergency. While many tout the progressive actions taken and deals made at COP26, there is much to be seen on the urgency of action as it pertains to the survival of the most marginalized and impacted communities. In other words, without immediate action COP26 may be considered yet another ‘climate catastrophe.’

For many Global South activists and communities, whose realities are already plagued by climate variability and change, the pledges and actions agreed upon at COP26 were too late, inadequate, and exclusive. The damage and consequences of climate change, especially extreme weather events like hurricanes and cyclones, require urgent and ambitious adaptation measures, which continue to be inadequately addressed and funded. Nonetheless, governments and international corporations continue to devastate the lands and natural resources of Indigenous people and local communities through the construction of multimillion-dollar “development” projects.

There is much to be seen on the urgency of action as it pertains to the survival of the most marginalized and impacted communities.

At COP15 in Copenhagen in 2009, countries in the Global North agreed to pool $100 billion by 2020 to assist developing countries to reduce the emission of greenhouse gasses and help to mitigate climate change impacts. However, the target was missed and has now been shifted to 2023 in response to the current pace of commitments even though the possibility of this still seems unattainable.

Researchers and those battling the harsh impact of climate change continue to express their dissatisfaction with the lack of stronger commitments to reduce emissions, the willingness to deliver on climate finance, and overall failure to secure a Loss and Damage (L&D) financing facility for highly vulnerable countries. Loss and Damage refer to the impacts of climate change, especially from extreme weather events, that occur despite adaptation and mitigation efforts, some of which are poorly designed and implemented. Given that these impacts are already occurring and are expected to increase in the coming years, this is a cost that many countries in the Global South will be unable to meet on their own.

This is, however, not the first time there has been pushback on efforts to reduce L&D by states and the 2022 Bonn Climate Change Conference, which concluded in June, is proof of this. While the Santiago Network dialogues focused primarily on structure and operationalization instead of providing technical assistance for developing countries to address climate risks, the developing countries, especially small island states, at the Glasgow Dialogue emphasized the importance of finance for physical losses and damages as well as for emerging crises (a result of non-economic losses inclusive of the impacts on already vulnerable state resources, such as health, mental wellbeing and education). Civil society groups also advocated for financing for L&D impacts, which resulted in a lack of consensus on the way forward.

The stance of some state parties to neglect the need for the inclusion of human rights and gender-specific language in negotiations on Action for Climate Empowerment (ACE) remained clear during the proceedings of the Bonn Conference and will continue to call to action stakeholder groups of the UNFCCC like the Children and Youth Constituency (YOUNGO) and other supporting constituencies like the Women and Gender Constituency (WGC) and the Loss and Damage Collaboration. Very little that is legally binding has emanated from these processes over the years and the lives and livelihoods of those living through the brunt of the climate crisis can no longer wait.

At COP26, logistical difficulties—vaccine inequity, border controls, visa complications, the reduction in the number of attendees from the Global South and the lack of consideration of people with disabilities—were among the condemnations from observers directed at the COP26 Presidency. Like COP26, civil society mainly criticized the logistics and visa processes for the Bonn Conference. During interactions with the COP27 Presidency, observers from the different constituency bodies demanded that they ensure participatory and meaningful engagement, accessibility, especially for people with disabilities, and the safety and security of civil society in Sharm El-Sheik (Egypt). They also made use of the conference center’s’s corridors to call for loss and damage finance, the integration of gender across the different issue tracks, as well as for the protection of environmental defenders.

The inaccessibility to the online platform during COP26 made it impossible, especially for activists and their communities, to join sessions. For those who were able to attend in person, there were other challenges, including the high costs of flights and hotels, last-minute changes in quarantine rules, visa regulations and cancellation of accommodation, which civil society sees as a bigger challenge for the upcoming COP27 in Sharm El-Sheik.

Despite COP26 being a catastrophic failure of an international climate event, civil society actors will continue to demand a world centered on care and conviction for people and the planet as they plan actions towards COP27.

As Global South activists and communities face climate emergencies, guidelines and commitments that seem promising are only the first step in facilitating concrete action. The commitment of world leaders, especially those in the Global North, and others largely responsible for environmental devastation and climate anxiety is required to ensure climate finance for developing countries centers people, that their promises and solutions are not false and are grounded in community narratives and experiences, and that ongoing land grabbing and human rights violations against Global South environmental defenders by international corporations and local governments are addressed.

Financing for L&D for developing countries remains a key issue of debate which will not only significantly impact lives and livelihoods but also aspects of the identity and culture of Global South nations. With COP27 on the horizon, through inclusive and meaningful participation of Global South observers, there is a demand for states to be transparent, accountable to and collaborative in decision-making and the implementation of climate agreements and commitments. More specifically, there is a demand that L&D be put on the COP27 agenda. Effective climate action and gender-just solutions cannot be taken without the active participation and integration of the narratives and knowledge of those most impacted in the Global South, whether state parties or communities.

Jhannel Tomlinson is a scholar-activist from Jamaica and IWRAW’s Environmental Justice Fellow who has combined her scholarship and activism to educate and empower vulnerable groups in the areas of climate change adaptation and environmental justice.