While it is imperative that parties to the conflict must stop using landmines, we are also faced with the question of how to respond when they do not. 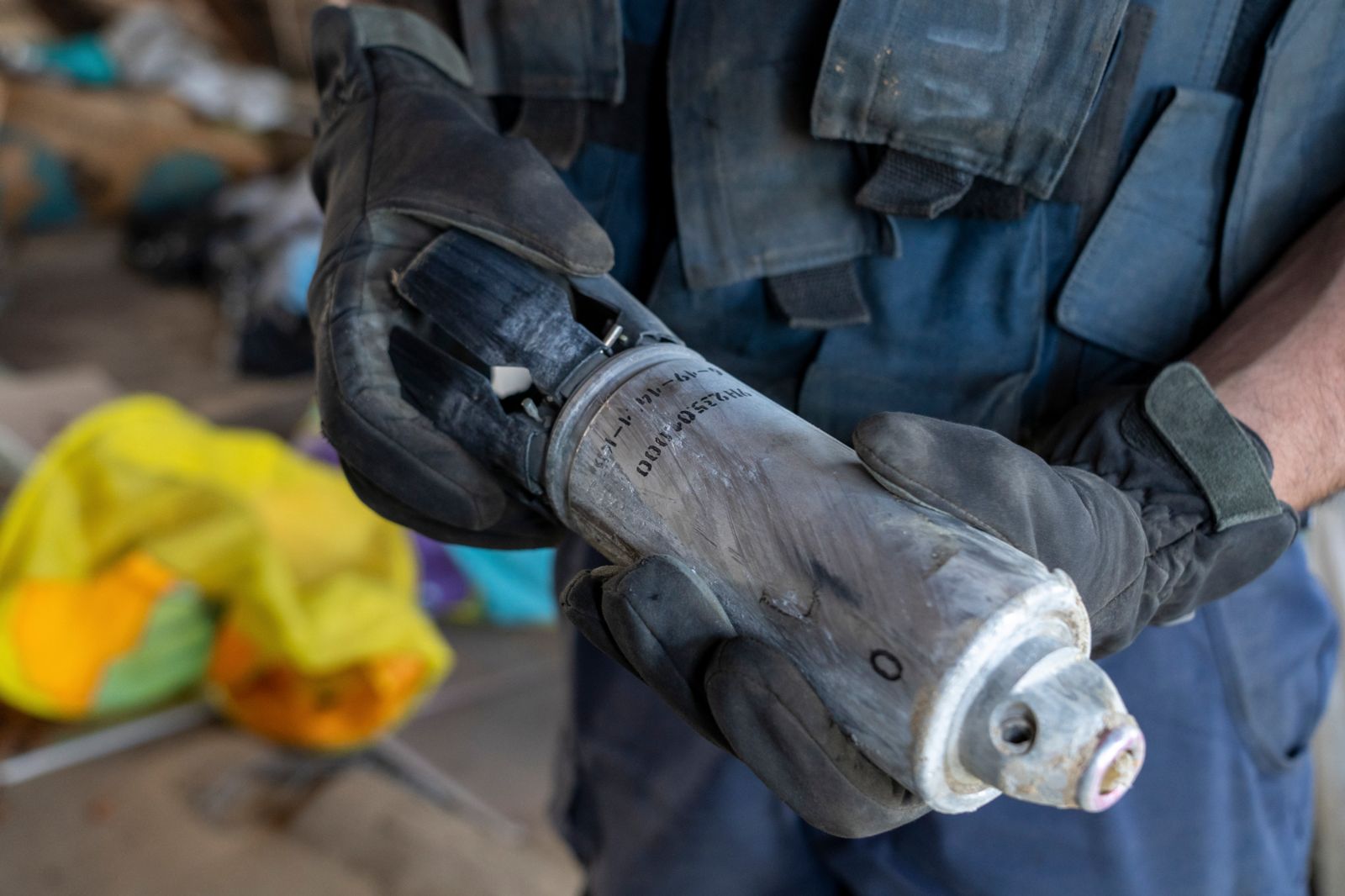 Ukrainian rescuer holds a defused mine in the Eastern Ukrainian city of Kharkiv, April 2022. EFE/EPA/VASILIY ZHLOBSKY

Russian forces have allegedly planted tens or even hundreds of thousands of explosive mines around Ukrainian homes, streets, and fields when they retreated from the Kyiv area, according to remarks made by Ukrainian President Volodymyr Zelenskyy earlier this month. These alarming reports bring back memories of my work in Ukraine in 2016 and 2017 as a ceasefire monitor for the Organization for Security and Co-operation in Europe (OSCE), where one of my tasks was to observe and report on landmines and civilian casualties.

Ukraine is one of the most heavily mine-contaminated countries in the world and already had significant numbers of mines prior to the full-scale Russian invasion in February. Both anti-vehicle and anti-personnel mines, as well as trip wire devices and booby-traps, were commonly planted by both Ukrainians and Russians before the intensification of the conflict this year. From November 2019 to March 2021, OSCE’s Special Monitoring Mission reported observing nearly 20,000 mines.

Landmines are by definition indiscriminate: they inflict injury and death long after their military purpose has passed, and ultimately terrorize the civilian population, cutting them off from using their land. While it is imperative that parties to the conflict must stop using landmines,  we are also faced with the question of how to respond when they do not.

In my time as an OSCE monitor in eastern Ukraine, I documented cases where people were driven by desperation, cold, and hunger to enter known minefields in order to fish, gather mushrooms, or collect firewood, only to be injured or killed by mines. Workers in agricultural fields, grazing livestock, and  wildfire fighters take on a new risk of imminent injury or death where mines have been sown.

As Ukrainians now increasingly face food insecurity and limited access to clean water, they are more likely to seek firewood or water in areas where they know there may be mines, or to encounter mines placed at crossing points as they flee dangerous areas.

While it is imperative that parties to the conflict must stop using landmines,  we are also faced with the question of how to respond when they do not.

Reporting on the dangers of mines to civilians is essential for combatting their use. In August 2017, I was monitoring Stanytsia Luhanska bridge in Luhansk, Ukraine, which crosses the line between government-controlled and non-government controlled areas, and was the only way the elderly, children, and people in wheelchairs could access medical care, pensions, and family on the other side. My colleagues and I spotted a hand grenade rigged as a booby trap, fixed to the side of the narrow passage where civilians were walking and intended as a means of securing the separatist firing position. Our public report of the incident put pressure on the separatist armed guards to eventually remove the booby trap so that civilians could cross safely.

Physicians for Human Rights (PHR) shared in the Nobel Peace Prize in 1997 along with other coalition members of the International Campaign to Ban Landmines for its work exposing the public health threat posed by landmines and mobilizing the medical community to speak out. In Cambodia, for example, PHR documented how more than 35,000 people suffered amputations due to landmine injuries. This advocacy campaign resulted in the development and adoption of the 1997 International Mine Ban Treaty. Ukraine has ratified the treaty, but the Russian Federation and the United States have not.

Antipersonnel mines, which are banned under the Treaty, inflict terrible injuries within a blast radius of up to 15 meters, but they are not the only types of landmines that can injure and kill civilians. Civilian minibuses and minivans have hit anti-vehicle mines at checkpoints in earlier years in the conflict, with fatal consequences. My former colleague, an American paramedic, was killed in 2017 when the vehicle he was in passed over an anti-vehicle mine. His death prompted the only time in its history that the International Humanitarian Fact-Finding Commission (IHFFC), established to investigate possible breaches of international humanitarian law, has been activated.

In the case of my paramedic colleague, the Commission found that, as an unarmed civilian monitor, he was not the intended target. However, they also found that placing a landmine on a road known to be used by civilian vehicles constituted an indiscriminate and unlawful use of landmines under international humanitarian law. His death illustrates the inherently indiscriminate nature of mines, which kill both intended and unintended targets.

Advocacy to limit the harm of landmines must also include humanitarian access for professional demining operations. In past years, OSCE has reported farmers trying to remove mines and unexploded ordnance by themselves at great peril to be able to use their land; mines also increase the danger of repairing damaged civilian infrastructure such as water pipes and electrical lines. Children, in particular, are at high risk of being harmed, as they may try to play with unexploded ordnance.

In my prior role, my colleagues and I oversaw “windows of silence” (temporary ceasefires) to allow for demining. Once, while monitoring a demining operation in eastern Ukraine, I was surprised to see a young soldier in a Kevlar vest pick up an unexploded ordnance with his bare hands and put it into a cloth bag. Recent footage has shown Ukrainian soldiers pushing aside anti-tank mines with their feet to clear roads needed for civilian evacuation. Donor countries must devote resources for humanitarian demining and mine education in Ukraine so that demining operations are safe and do not put civilians at further risk.

In the United States, the Trump administration reversed an Obama-era prohibition on the use of anti-personnel landmines outside of the Korean peninsula; in his campaign, Biden promised to restore the ban, but has failed to do so since assuming the presidency. Last week 21 Members of Congress signed a letter calling on the Biden administration to commit to banning the use and production of cluster munitions, including cluster munitions which disperse mines.

Given the refusal so far of countries like the U.S. and Russia to ban the use of landmines and ratify relevant treaties, which international law mechanisms can be deployed to combat the threat of landmines to civilians? In my experience, monitoring and reporting about the threats is one of the main tools we have. The Independent International Commission of Inquiry on Ukraine, recently established by the United Nations Human Rights Council, should include monitoring of civilian casualties due to mines in its civilian casualties monitoring, and monitor compliance with international humanitarian law restricting the use of landmines. For cases where forensic analysis is needed as a part of such monitoring, states should consent to the investigative mandate of the IHFFC and deploy it to investigate breaches of humanitarian law such as those reported in Ukraine.

Ultimately, evidence must be gathered concerning the grave public health threat caused by landmines to persuade states to end the use of landmines once and for all.

Kathryn Hampton is the deputy director of physicians for Human Rights’ Asylum Program. Prior to joining PHR, she worked  with the Organization for Security and Cooperation in Europe, the International Rescue Committee, and the International Commission on Missing Persons in Bosnia-Herzegovina, Iraq, Turkey, and Ukraine. She holds an MSt in international human rights law from the University of Oxford and an MA in refugee protection and forced migration studies from the University of London. Her Twitter is @Kathryn_Opal.