Samuel Moyn led off this discussion by arguing that “even perfectly realized human rights are compatible with radical inequality.” Phillip Alston derides that notion as “patent nonsense” and argues that human rights “demand” that states take steps to end extreme inequality. It’s possible that neither of them is entirely wrong. But even if Moyn is correct that it’s possible to imagine a world where extreme inequality and the full enjoyment of fundamental human rights exist side by side, it’s quite clear that this imaginary world is not the one we live in.

Extreme inequality is not in and of itself a human rights violation, but it is a profoundly important human rights problem. Inequality is inextricably bound up with the denial of people’s full enjoyment of all human rights and of economic, social and cultural rights in particular. It is also one of the most powerful currents that pushes people into the kind of political marginalization that leaves them vulnerable to abuse and bereft of meaningful access to remedy. Some human rights abuses may well only be remedied by addressing the inequality that helps make them possible.

Philip Alston criticizes Human Rights Watch and Amnesty International for what he calls our “deep reluctance” to factor “questions of resources and distribution” into our research and advocacy. And in point of fact, Amnesty, Oxfam and other human rights groups have gone further than we at Human Rights Watch have in explicitly calling for efforts to roll back what they call “an inequality crisis that is spiraling out of control.”

Human Rights Watch has deliberately focused an increasing share of our research on problems that uniquely impact people at the bottom economic rungs of their societies.

Alston’s point deserves a response but it is also important to recognize that in recent years Human Rights Watch, like other human rights groups, has deliberately focused an increasing share of our research on human rights problems that uniquely impact people at the bottom economic rungs of their societies. We have documented the impact of Spain’s foreclosure crisis on vulnerable groups; the ways families forced to make way for mining operations in Mozambique were pushed into unacceptable new living situations; and the potentially devastating human rights impacts of climate change on struggling rural communities around Kenya’s Lake Turkana.

In the last few years we have also developed a stream of research in the US focused on some of the widely neglected ways the courts—in tandem with sometimes predatory businesses—help exacerbate or even criminalize poverty. This research exposes some of the myriad ways poor people are pulled into the court system because of their poverty, and are then confronted with a system that is stacked against them in ways they cannot really hope to overcome. 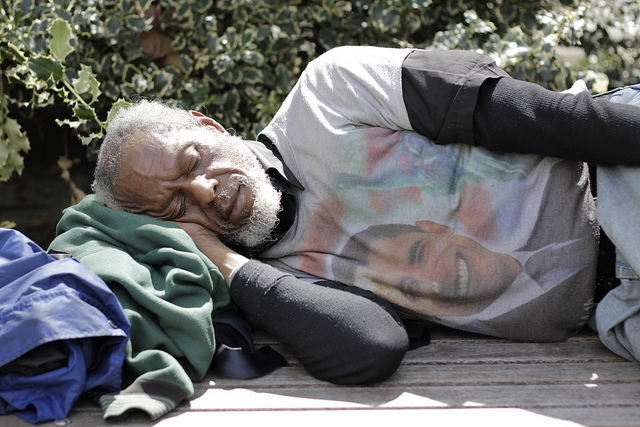 In the United States, the court system often works in ways that exacerbate or criminalize poverty--often leaving the poor to fend for themselves in a system stacked against them.

In Arkansas, we looked at an archaic state law that landlords use to file criminal charges against tenants who fail to pay their rent on time. We also examined how courts in several US states put low-level offenders who lack immediate means to pay fines under the “supervision” of for-profit probation companies. These companies then extract steep fees from probationers under a system of “offender-funded” justice that tramples on the rights of poor people.

Most recently, our research has looked at how multi-billion dollar companies that buy up delinquent consumer debt are able to secure hundreds of thousands of rubber stamped court judgments every year against mostly poor litigants in courts across the United States. These cases are often badly flawed, but sail through because many courts apply no independent scrutiny to suits filed against people who cannot articulate a legally viable defense. The result is that well-heeled corporate plaintiffs routinely secure dubious court judgments against poor alleged debtors en masse, without ever having to present any meaningful evidence in support of their claims.

This kind of work is directly relevant to the broader political movements coalescing around demands for greater equality in countries around the world. In addition to being human rights problems, these issues are compelling illustrations of the pervasive injustice that goes hand-in-hand with poverty.

None of this will assuage critics who would like us and other human rights groups to take a broader, more explicit stand against extreme inequality. And it is true that we, like other human rights groups, have struggled to find our footing with this issue. None of us can really claim to be at the forefront of political struggles in favor of greater equality, progressive tax policy or other important redistributive goals. But this does not boil down to a simple “failure” of human rights groups to engage with the issue. There are in fact good reasons for us to be cautious.

Moyn’s most interesting claim here is probably the notion that “in the face of distributive inequality, the human rights movement must acknowledge its limits. Someone else will have to step in.” This is to some degree insightful, but it goes too far. We have an important role to play in exposing the injustice, deprivation and hardship suffered by people at the losing end of our increasingly unequal societies. We also have a role to play in helping to protect the space activists need to push back against governments and other entrenched interests that have a stake in the status quo. We may be less well equipped to take the lead in articulating the moral case against extreme inequality.

It is also important to recognize that those on the front lines of the movement against extreme inequality may not be clamoring for human rights groups to take a leading role. Human rights discourse may simply not always offer the most effective or widely resonant way to frame demands for greater equality. And it may be that objectively, human rights language is simply not the best tool to describe some of inequality’s most pernicious impacts.

In this sense inequality is like two other important, broadly political problems that human rights groups have struggled to grapple with: government corruption, and the collective failure of governments to react effectively to climate change. Neither can be usefully described—or remedied—using a human rights framework alone. But at the same time, human rights norms offer a compelling and objective way to capture the harms these problems cause in the lives of real people, and the resulting state responsibilities to address them. We all have our role to play, but we may not all belong on center stage.