The Panama Papers give NGOs a prime opportunity to talk about inequality. But how they do it matters.

Inequality is increasing to the detriment of economic and social rights, and NGOs have been spending enormous amounts of energy campaigning on inequality and trying to get it on the global policy agenda. Historically, NGOs are most effective when they can point directly to abuses involving bodily harm and obvious injustice—images of malnourished children immediately come to mind. NGOs have a tougher time, however, getting inequality-related issues on the technical policy agenda and into the engine rooms of economic redistribution.

The Panama Papers leak, however, shines a light on a major source of increasing global inequality and is a prime opportunity for NGOs to get more traction on the issue. The leak provides information on 11.5 million files, exposing the tax avoidance or illicit practices of 12 current world leaders and a range of politicians and celebrities in the developed and developing worlds. But how can NGOs make the most of this opportunity? One key way to create pressure is to have a benchmark that compares countries against a common standard on an issue.

Our research suggests that there are two routes for NGOs to use benchmarks. One goes with the flow, the other against it. The first tactic is to join forces with the policy machine by playing up an existing normative position. In this way, NGOs can fight inequality by creating an alliance with authorities and corporations on the need to extend reform. Corruption is a good example. In 1995 Transparency International (TI) launched the Corruptions Perceptions Index (CPI) to lessen the impact of corruption on development outcomes. The CPI was launched in an environment of increased attention on reforming polities in the post-Cold War period and was emboldened by ready support from multinational firms, powerful states and international organizations that had a pre-existing interest in reducing corruption.

As a “reformist” benchmark, the CPI swims with the tide. This tactic relies on the NGO selecting an issue that it knows will attract positive attention from authorities, corporations and funders. The NGO will have to find the experts to create the benchmark content, and it will face some tests on whether the issue is salient enough to maintain a support base. But if the NGO can get its ducks in a row, then it has a good chance at success. The success of the World Wildlife Fund’s “Gold Standard” for carbon offsets is one example. There the WWF set up an expert group as an independent body, found the experts, brought in NGO and private sector stakeholders, created the benchmark and pushed forward.

TI’s CPI is a more important example for campaigning on inequality. TI’s 2015 CPI ranked 167 countries with Denmark heading the list (as least corrupt or “very clean”), the Netherlands at 5, Switzerland at 7 and Singapore at 8. Afghanistan, North Korea and Somalia were at the bottom as highly corrupt. NGOs supporting the CPI link corruption to inequality and poor development outcomes. This places corruption on the policy agenda but doesn’t raise concerns about the engine rooms of economic redistribution, so its use in fighting inequality is limited. 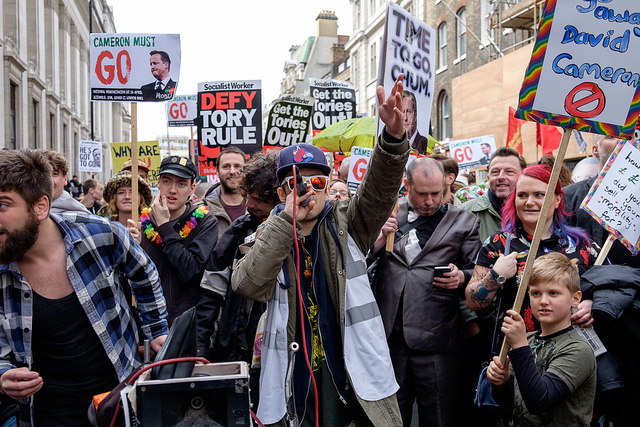 The Weekly Bull/Flickr (Some rights reserved)

Protestors gather in the UK to call for David Cameron's resignation following the release of the Panama Papers. While the scandal has shed light on corporate tax avoidance, lasting reform will be challenging without adequate standards to evaluate corruption and the complex drivers of economic inequality.

The second route for NGOs, then, is to aggressively swim against the tide. We call this a “revolutionary” benchmark. This tactic is especially important for dealing with technical complex issues, such as the tax avoidance and evasion issues pinpointed by the Panama Papers.

Rather than thinking of havens as places with dodgy lawyers in sunlit places, we also need to look at “secrecy jurisdictions” within the heart of the OECD.

In 2009 the Tax Justice Network (TJN) published its first Financial Secrecy Index (FSI). The index confronts the idea that offshore finance is all about “tax havens”. Instead they argue that the key problem is secrecy. Rather than thinking of havens as places with dodgy lawyers in sunlit places (like Panama), we also need to look at “secrecy jurisdictions” within the heart of the OECD.

The FSI ranks countries and jurisdictions according to their contribution to “global financial secrecy”. TJN’s experts combine a measure of how hard it is to find information on firms and accounts with a measure of the size of that jurisdiction’s footprint within the global financial system to rank countries. Their aim is to put a spotlight on the sources of economic inequality, which are closer to home than commonly thought. This is much harder to achieve than going with the flow.

It is harder for NGOs to swim against the tide because to do so they have to confront powerful interests. It requires them to rely on their own expert knowledge and then to create a groundswell by including other (bigger) NGOs. And then they must defend their expertise against inevitable challenges from well-resourced interest groups. In TJN’s case they draw on experience in accounting, corporate service provision and law to develop the FSI, and defend it. The benchmark is now used by a range of large NGOs, International Economic Organizations, private financial institutions and rating agencies.

In stark contrast to the corruption index, the 2015 FSI ranks Switzerland as the worst offender, the USA at 3, Singapore at 4, Luxembourg at 6 and Germany at 8. Notably these jurisdictions perform terribly in the FSI even if they perform superbly in the CPI. The FSI places direct pressure on “secrecy jurisdictions” by suggesting it is these states, and not the havens in the sun, that need to reform.

The lesson here for NGOs is simple. If they wish to put economic inequality on the global policy agenda, they need to decide if their intentions are reformist or revolutionary. Both paths can work. But getting inside the engine rooms of economic redistribution requires scarce skills and ambition. The Panama Papers tell us that whistleblowers are important. To really address economic inequality, NGOs need to find ways of not only encouraging whistleblowers but also identifying those who can use their expertise to swim upstream.

Duncan Wigan is associate professor at the Copenhagen Business School and research associate at the Norwegian Institute of International Affairs. His book with Seabrooke, Global Tax Battles, is forthcoming with Oxford University Press.