Many corporations have already taken a stand against Trump’s travel ban, and corporate leaders advising Trump must defend human rights.

A growing chorus of corporate leaders are speaking out against US President Donald Trump’s executive order, which suspends entry into the United States from citizens (or dual citizens) of seven predominantly Muslim countries.

Hi-tech companies were the first to raise concerns, at least partly because their industry is highly reliant on foreign talent. In fact, one study shows that 51% of America’s billion-dollar startups were set up by immigrants. Some of the sector’s biggest companies have been founded or run by executives, engineers, and managers born abroad. Many came as graduate students and stayed on, as Google’s Sundar Pichai and Microsoft’s Satya Nadella’s cases show. Some, like Google co-founder Sergey Brin, are children of refugees. After the ban. Brin and Pichai addressed Google employees with spirited speeches, expressing solidarity with the staff’s anger. (Brin was also seen at the San Francisco airport, showing support to demonstrators and pro bono lawyers, who are the real heroes of this drama).

Other companies have joined in the protests too: Starbucks announced that it would aggressively recruit refugees over the next five years; Airbnb is offering free rooms to those stranded; Amazon has reached out to US Congressmen to explore legislative options to counter the executive order; and Apple’s CEO Tim Cook also said he is exploring legal options.

Coca Cola, whose CEO Muhtar Kent is Turkish-American, has criticised the travel ban, as has automaker Ford. Goldman Sachs’s CEO Lloyd Blankfein told his employees, “Being diverse is not an option—it is what we must be.” General Electric and Nike, too, have said they oppose the ban. Yogurt maker Chobani, which has recruited refugees for nearly a decade, said it would back every employee who faces any threat or problem because of the executive order. 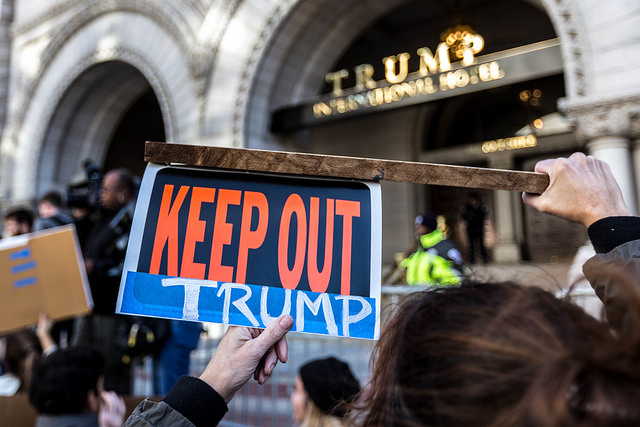 Many US corporations have joined in the outcry against President Donald Trump's travel ban.

US corporate leaders deserve praise for speaking out.

Cynics will argue that their moves are calculated—free movement of people, like free movement of goods, benefits the corporate bottom line. Some have even suggested that companies are speaking up because they are global players, and as such have to respond to customers throughout the world, not only in America. True, these companies rely on foreign-born workforces at home and overseas. They also rely on foreign markets for revenue and profit.

All of these company statements against Trump’s order demonstrate the need for a more nuanced understanding of business-government relationships.

CEOs don’t make such decisions lightly. They have many factors to balance, including the safety of their employees and their families. Often, such public advocacy falls way short of what is necessary to protect human rights.

To be sure, the record of these companies may not be perfect. No doubt they can do more, and speak out more often to advocate respect for human rights. But none of that negates from their stand.

Conspicuous by their absence to date are pharmaceutical companies—which rely on foreign talent far more than does the tech sector—and oil companies, which have presence throughout the world, including in countries targeted by the executive order.

All of these company statements against Trump’s order demonstrate the need for a more nuanced understanding of business-government relationships. Corporate critics see businesses as allies of the state—relying on governments for contracts, lobbying to change laws, to lower taxes, and to secure preferential terms. But the role of a corporation today is more complex—the pursuit of the bottom-line is important, but other factors, including appearing to be doing the right thing in a global marketplace, as well as living by corporate values, are also important factors. (Ford’s Mark Fields and Coke’s Muhtar Kent both cited their companies values as one reason they criticised the executive order). The values they’ve spoken of include respect for diversity, dignity, inclusion, and equality.

President Trump has set up a Strategic and Policy Forum to advise him on economic matters, which includes leaders of Wall Street firms like Blackstone, Blackrock, and JP Morgan Chase, as well as GM and Tesla, Uber, Pepsi, Disney, consulting companies EY and Boston Consulting Group, Walmart, Boeing, and IBM, among others. These members certainly have their work cut out for them.

Corporate leaders must use their collective influence to make the case that pursuit of economic prosperity is impossible without respect for human rights. The world is watching them.

A version of this article first appeared on the website of the Institute for Human Rights and Business.

Salil Tripathi is Director of Emerging Issues at the Institute for Human Rights and Business (IHRB). His long experience in advancing the business and human rights agenda includes being a researcher at Amnesty International (1999-2005) and a senior policy adviser at International Alert (2006-2008).