Why does progress on equity and human rights depend more on workers’ organization than we usually think?

How linked are working class organizations to human rights and overall human development? The International Trade Union Confederation recently published its annual global rights index (ITUC), which rates countries by aggregating 97 indicators and sorting them into one of five rankings. At one end are those countries that do not guarantee labor rights due to breakdown of the rule of law, while at the other are those who rarely have labor rights violations. The index thus identifies which are the worst and the best countries for workers to live, as shown by the map in Figure 1. 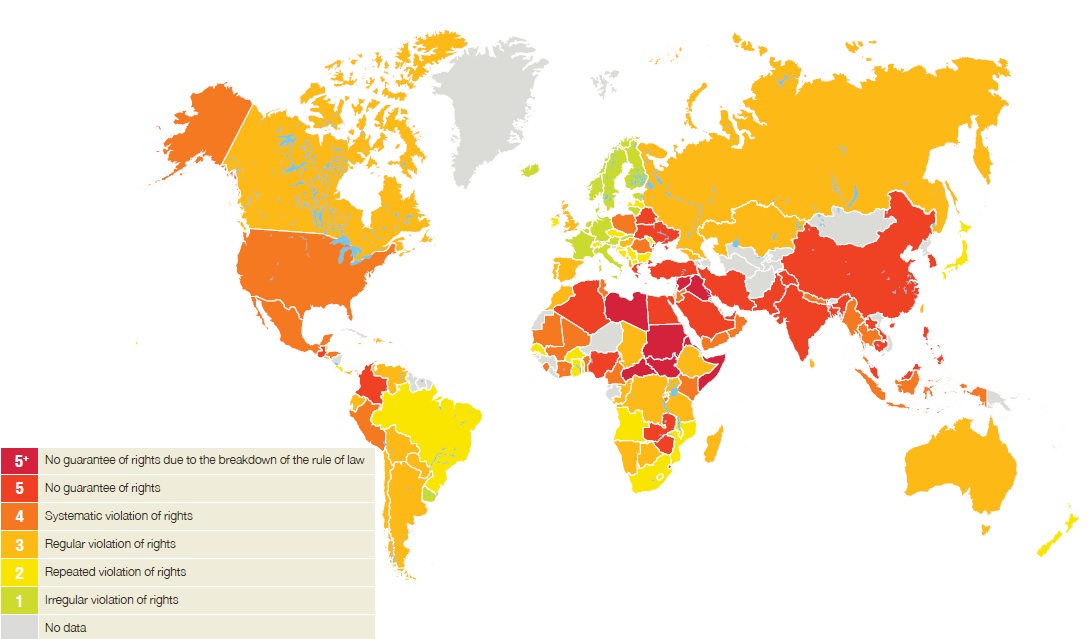 I compared the most recent ILO data on union density rates with the UNDP’s Human Development Index (HDI) for 28 countries that fall into the different ITUC rankings, finding a strong positive relationship between these two variables—even stronger than the correlation between HDI and GDP per capita. This suggests that union density can better explain variation in human development than average income in a given country. That is, the greater union density in a country is, the higher the human development level tends to be.

In countries where there is no guarantee of labor rights according to ITUC, union density rates are lower than 36% of the total employment. On the other hand, countries where there is irregular violation of labor rights are those that have union density rates higher than 60%, with the exception of Germany and Estonia. The positive relationship between union density and HDI—an imperfect measure of the progress on rights—also seems to apply for other possible human rights measures, like the HRRI (Human Rights Risk Index) published by the company Maplecroft.

Another way to read this data is to conclude that as a country develops, or grows in wealth, unionism tends to be stronger. However, the case of the United States in the last century shows that this is not necessarily so. The next graph (Figure 2) depicts the linked evolution of the union density rates and the share of the top 10% richest population in total income. The graph shows that these two variables are strongly related. The period of continuous economic growth since the 1940s until today, with the exception of the 2008 global economic crisis, is a period in which unionism got weaker and the richest got richer.  An economy characterized by weakening unions is one in which it is much easier for economic elites—the richest members of society—to unduly influence democratic governments. That is, society becomes a co-opted democracy.

Source: Kimball and Mishel, using on US Census Bureau data and Piketty and Saez (2013).

The correlation between the weakening of unions and a pro-rich growth that increases inequality is not just isolated to the United States. A study conducted by researchers from the International Monetary Fund  (IMF) for developed countries shows that lower unionization is correlated with higher increases in the top ten percent’s income share during the past three decades. The IMF concluded that the decline in unionization is the main factor explaining the huge rise in the top ten percent’s income share and, thus, increasing levels of inequality.

But how can strengthening unions help reduce inequality and improve human development? First, unions increase workers’ job security and wages through collective bargaining and, thereby improve the distribution of income vis-à-vis capital owners. Some orthodox economists have criticized this effect of unionism, arguing that a higher wage in the formal economy excludes less qualified and younger workers from formal employment, or condemns them to unemployment. Nevertheless, this hypothesis lacks empirical support according to an exhaustive review of the literature, both for developed and developing countries. This research also demonstrates the absence of evidence about the negative impacts of labor unions on efficiency in developing countries, which calls into question the idea that collective labor rights should be a luxury that can be guaranteed only when countries reach a certain level of wealth. In any case, as the ILO has pointed out in its last Global Wage report, the extent to which collective bargaining can compress overall wage inequality depends on factors like a country’s negotiation framework, or the degree of coordination among workers engaged in collective bargaining. Overall, countries where a large proportion of workers are covered by collective agreements tend to have lower wage inequality.

Second, unions can play, and historically have played, a crucial role in the recognition of human and labor rights and the implementation of progressive social policies. Some of our most treasured rights have resulted from successful union activism (e.g., limits to working hours, abolition of child and forced labor, social security rights). These successes have also included those at the bottom of the income ladder and discriminated groups. Unions are the vehicle through which powerless individual workers transform themselves into key collective actors to fight for more equitable social policies and inclusive paths for globalization. Furthermore, unions can also positively contribute to efficiency by improving workplace communication, enhancing cooperative relations and reducing labor turnover.

However, unionism currently faces enormous challenges that require self-examination and a review of current labor policy. Some countries have a huge gap in union membership rates by sex, probably because of the differences in types of contracts and labor participation between genders. Many countries have taken measures to roll back collective labor rights, so much so that in many cases what is at stake is not the relative strength but the very existence of trade unionism. Others, particularly developing countries, have low union participation rates because unionism has been a privilege of wage employees. In Colombia, multiple human rights violations have seriously affected unionism, including the murder of several union members and thousands of threats. It is not surprising then that Colombia ranks among the ten worst countries for working people according to ITUC. Nonetheless, the fact that only 2.3% of workers in the country belong to unions also reveals a problem: unionism does not appeal to a majority of people. Recently, there have been initiatives in Colombia such as the Domestic Workers’ Union or the Actors’ Union (ACA), which are challenging conventional unionism by including informal workers and innovating labor rights advocacy. This can change how people perceive them in order to overcome the anti-unionism culture, forging new paths to move ahead.

In a world where extreme inequality and concentration of power threaten democracy and the priority that human dignity should have over private interests, Marx’s rallying cry becomes more relevant than ever: workers of the world, without distinction of any kind and in cooperation with other social movements, unite!

Sergio Chaparro Hernández is a researcher at the Center for the Study of Law, Justice and Society (Dejusticia).