The road to greater ownership of human rights by emerging powers is a bumpy one. But it will lead to a more real, and less utopian approach.

George Soros’ decision in 2010 to bankroll the creation of regional Human Rights Watch centers reflects the widespread view that the “emerging powers" will have to take some ownership of human rights if that enterprise is to gain momentum in the developing world.  But it is unclear how much buy-in there will be if Soros has to pay them to play, and if the home office in New York keeps the regional centers on a short leash. First-World activists and liberal states will no doubt keep pushing developing states to sustain their engagement with the canonical liberal human rights agenda.  Without this push, many developing societies would likely slack off or veer off in idiosyncratic directions.  But there will be a push, and the responses to it in developing societies will range across every point on the spectrum from enthusiastic embrace to volatile backlash.

Some people in the developing world are eager to adopt the language and methods of human rights because they are weak and exploited.  Some disempowered groups, cultural minorities, women, and oppressed classes, unaccustomed to hearing the idea that they should have a better deal expressed in their own societies, are understandably enthralled by the notion that the most powerful, most successful societies on earth articulate well-worked-out, universal arguments that can be applied to their own plight.  In earlier times, such people were attracted to Christianity or to Marxism for the same reason:  the Christians say I don’t have to bind my feet.  Hallelujah!

Others are eager to adopt human rights rhetoric and practices because they are opportunists.  Even Northern human rights organizations have to adapt to the priorities of funders.  In some locations in the South, where economic opportunities outside of the state sector are slim, educated middle classes that are not in power have strong incentives to recast themselves as “civil society” NGOs. 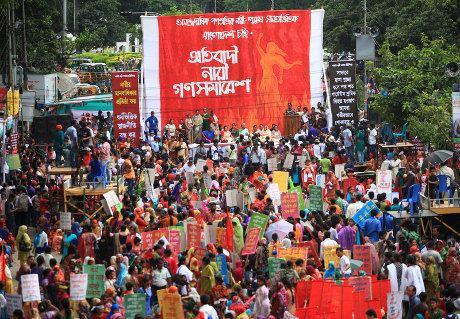 Bangladeshi women take part in a rally in Dhaka to campaign for women's rights.Demotix/Shafiqul Alam. All rights reserved.

Often such organizations, even when well funded, lack the capacity to act effectively in societies that are organized not around impersonal policy ideas but around patronage, religion, ethnicity, and tribe.  This makes it difficult to connect to a social base except through patronage or through the defense of an existing identity group, both principles of organization that make a poor fit with impersonal, universalist rights concepts.  As a result, “civil society” activists have an incentive to translate rights talk into the vernacular of the people they seek to serve and recruit as supporters. In the religious vernacular, for example, rights can sometimes be explained better as duty or dignity.  Sometimes translation goes smoothly, as when Senegalese Sufis explain within the logic of their own discourse why female genital cutting is wrong. But often something is lost in the translation.

In Egypt, for example, the Morsi government arose in the context of the rights-and-law talk of the popular movement that overthrew Mubarak’s authoritarian regime.  Its international and domestic legitimacy depends to some extent on the results of fair elections and on the claim that it is procedurally superior to the thugs it replaced.  Yet its conservative Islamic support base rejects free speech on religious matters, alienates secular and Christian minorities, and demands that constitutional interpretation pass a strict religious test.  Trying to force through a constitution over objections from all quarters, Morsi resorted to highhanded shortcuts around due process.  This will be normal in emerging powers, including reforming regimes, that take ownership over human rights.  Even Turkey, which is fairly far along in its civic evolution, stands out for its use of the courts to muzzle and punish journalists.

Developing countries that take rights seriously typically deviate from developed democracies in the priority they place on economic rights as opposed to civil liberties.  Aryeh Neier, the founder of Human Rights Watch, explains in his recent book on the history of human rights that economic rights aren’t really rights at all; they are just policy demands that water down the rights brand. Even the most dedicated NGOs in poor countries think differently.  Shareen Hertel documents what she calls the “backdooring” strategies of NGOs in Mexico that need the megaphone of Human Rights Watch to publicize their campaigns, but in local discourse replace New York’s civil and political language with their own economic talking points.

While these divergences from First-World priorities might lead to rights improvements, an economics-first approach to rights can go too far.  Despite the absence of civic rights in China and the bloody Tiananmen crackdown, Deng Xiaoping lifted up more people from poverty and reduced child labor more than any other person in history.  Playing on those successes, the Chinese regime proudly issues regular human rights white papers outlining its plans to enhance human rights by improving medical care, rural development, and public schooling.

Rutgers anthropologist Daniel Goldstein reports on the confrontations between Bolivian police and slum dwellers who claim it is their “human right” to lynch the criminals who prey on them. NYU scholar Rachel Wahl interviewed Delhi policeto find out why they torture criminals and learned that they see themselves as defending the human rights of the victims.

In all contexts, including the emerging powers, defining human rights is about contentious politics, which can spin off consequences that are unintended by international rights activists.  International justice activism, for example, has interacted in complex ways with the Kenyan political process.  An International Criminal Court indictment over inciting violence during Kenya’s 2009 elections handed Uhuru Kenyatta talking points against imperialist threats to Kenyan sovereignty and Kikuyu identity, which helped him rally the electorate in his successful 2013 presidential campaign. The ICC indictment of his ethnic Kalenjin running mate William Ruto also helped Kenyatta gain crucial votes from the large Kalenjin minority, when Kenyatta’s main opponent broke with Ruto in an attempt to show Kenya’s vocal rights activists that he had clean hands. Neither Kenyatta nor Ruto seem too exercised by the threat of an ICC trial hanging over their heads, since their henchmen have successfully intimidated witnesses into silence.  Still, ethnic violence in the 2013 election was far less than in the previous one, in part because the ICC process turned the spotlight on Kenyan behavior and probably made its billionaire politicians worry about reputational consequences for international business deals.

As Samuel Moyn’s book The Last Utopia has shown, postcolonial statesmen have long understood that the key to both power and rights lies mainly in the development of domestic civic institutions, not in the rather utopian notion that they can be delivered by an international community of activists and lawyers. Indeed, Beth Simmons’ impeccably designed and executed statistical research shows that signing rights treaties makes a difference for rights outcomes if and only if the country has already made substantial strides in creating an independent judiciary and protecting space in which local activists can organize.

To get traction in the emerging powers and the developing world, human rights does need to move out of New York and London headquarters to find owners in societies where abuses present steep challenges.  As these new owners articulate their own perspectives, this process will be fraught with politics and unintended consequences, but at least it will be real, and less utopian.

If liberal states and rights activists are to play a constructive role in this process, they will need to use a lighter touch.  Many human rights reports hammer away at what actors in the developing world “must” do.  Instead, they will be more effective if they help to create an environment in which such actors have the incentive and the capacity to do voluntarily do what liberal rights activists want them to do.

Research shows that the two strongest predictors by far of good human rights outcomes are peace and democracy. Providing conditional access to special “club goods” of liberal democracy has also proved an effective tool for democracy promotion.  The European Union’s conditional terms for membership are a powerful example. The EU’s astute tactics in conditioning Romanian and Slovak accession on the adoption of policies to guarantee the rights of minorities, backed by strengthened rule of law, helped support the efforts of democratic coalitions to create favorable conditions for transition.  Another example is the EU’s Cotonou trade agreement with many of its former colonies, conditioning benefits on verified compliance with human rights norms.

Such “open door” policies send the signal that the benefits of membership in the liberal club are available to states that are ready to liberalize.  This strengthens the hand of progressive elements in the country, who can argue that liberalization will work if it is tried, and who will gain resources by following this path.  At the same time, the opened door, unlike the banged-on door, relieves progressives in developing countries of the burden of seeming like the stalking horse of the insistent neo-liberal imperialists.

Most important, open door strategies do not depend on the heroic assumption that outsiders can foresee the political consequences of coercing locals to hold elections, indict rights violators, or undertake radical cultural reforms. If the assumptions behind open door strategies are wrong, the incentives will not work, but no additional harm is done, and the incentives can stay in place for later, whenever the moment is ripe (Mary Anderson, Do no harm – How aid can support peace – or war). Good timing is everything in reform.