The Colombian case shows the need for flexibility in balancing the duty to prosecute international crimes with the duty to negotiate an end to the civil war.

Today, Colombia is a crucial experiment to test whether it is possible to negotiate a peaceful end to a long standing armed conflict, and at the same time not fall foul of the duty to prosecute the crimes committed in that conflict. This duty is derived from the Rome Statute that established the International Criminal Court (ICC). Worryingly, in Colombia the ICC Prosecutor's strict interpretation of that duty is placing undue difficulties on the peace negotiations. The same is true of the prosecutor’s policy to interpret narrowly the Rome Statute provision that she consider whether it is “in the interests of justice” to open an investigation or prosecution.

The Colombian case is crucial because a peace agreement to the 50-year old conflict seems probable. The government and the Revolutionary Armed Forces of Colombia (FARC), a leftist guerilla group, have reached substantive agreements on several issues. Further, both parties seem genuinely interested in reaching an agreement that is compatible with both the rights of victims and the duty to prosecute.

It is clear, however, that a peace agreement will not be possible if a too strict interpretation of this duty is applied. For example, one that would require the state to investigate all of those responsible for every international crime, and punish them in proportion to the gravity of the crime, which implies lengthy prison sentences. This is the position the ICC prosecutor seems to be taking in Colombia.

Yet, no armed group would agree to demobilize if it meant that the majority of its members would receive such punishment. An eventual peace agreement in Colombia will not fulfill a strict interpretation of the duty to prosecute. Such an interpretation might be reasonable in other contexts, but is impossible in the context of a negotiated peace in Colombia. 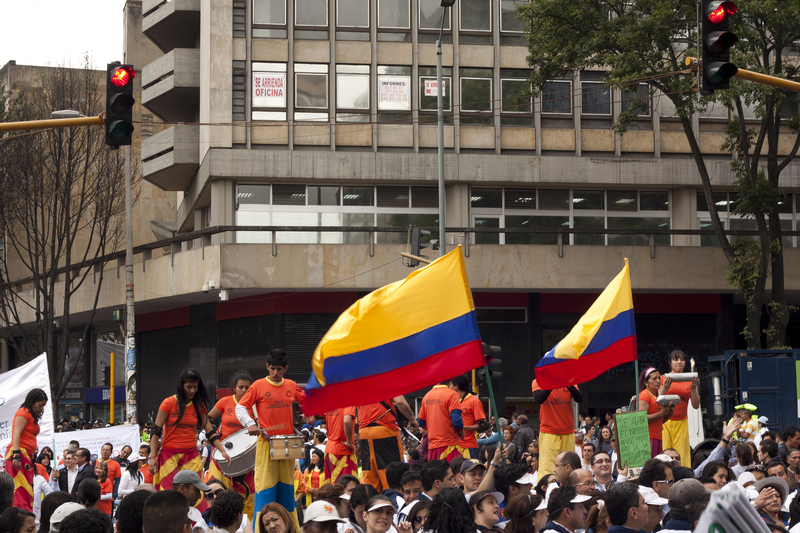 Colombian citizens march in support of peace negotiations with the FARC.

This does not mean, however, that the peace agreement should provide for a total amnesty: a complete forgiving and forgetting. There are alternatives. The peace agreement could provide for measures to seek the truth (such as a truth commission), reparation programs and legal and other guarantees to ensure the non-repetition of serious human rights abuses. With respect to criminal justice, the agreement could provide for trials for those most responsible for international crimes, leading to some form of alternative criminal sanction, which would be less severe than ordinary sentences for these crimes. And, in order to grant legal certainty to the peace process, the agreement could establish conditional amnesty for those who carry less responsibility – they would not be prosecuted provided they truly contribute to finding the truth and providing reparation to victims.

The duty to prosecute is not an absolute rule, but rather a duty that should be considered in the face of other obligations on the state.

Such an agreement does not fulfill the strict interpretation of the duty to prosecute. This leads to two questions: does such an agreement violate the Rome Statute? If so, should the ICC open cases in Colombia regardless of whether this would seriously impact the possibility of consolidating peace? Our answer to both questions is negative. The duty to prosecute is not an absolute rule, but rather a duty that should be considered in the face of other obligations on the state. And an ICC investigation that would destabilize a peace process that has genuinely sought to include the concerns of victims, and balance peace negotiations with the quest for justice, would be contrary to the “interests of justice.”

Certainly, states have a duty to prosecute international crimes, but there are various lacunae regarding the reach and content of this obligation, as we indicated in a recent book. Paraphrasing Mark Freeman, demanding a duty to prosecute every case in all contexts may lead to tension with other duties on the state, such as putting an end to an armed conflict and preventing further human rights abuses. There is no international norm that says the duty to prosecute must prevail against any and all other state obligations. It is inevitable, therefore, that a balance be struck.

The ICC should have more flexibility and prudence when it evaluates whether to open a case in a country that is negotiating a peace agreement. It must take into consideration the various forms of transitional justice adopted during peace processes, often after incredibly difficult and complex negotiations. Thus, in principle, peace processes that rule out general and unconditional amnesties should be respected, even if the provision for justice does not meet a strict interpretation of the duty to prosecute. Such may be the case because, for example, the agreement permits conditional amnesty for those who have committed war crimes and are not high up the chain of command.

The policy the prosecutor has formally adopted on the matter distinguishes between the “interests of justice” and the interests of peace, arguing the latter is beyond her remit. Rather, the prosecutor argues it is the UN Security Council (UNSC) that might consider the impact an ICC investigation might have on peace, and, if necessary, suspend an investigation (a power granted to the UNSC under Article 16 of the Statute). In this view, the Prosecutor may only consider the interests of the victims.

We believe, however, that this interpretation of “the interests of justice” is legally flawed. But even if the Prosecutor considers only the interests of the victims, why limit this to past victims? As Ronald Slye maintains, in a transition to peace there is a negotiation not just between victims of past abuses and their perpetrators, but rather also between past victims and future victims who will suffer if the war does not end.

In Colombia, a too rigid understanding of the duty to prosecute and the “interests of justice” in the Rome Statute threaten the possibility of negotiating an end to the armed conflict. This can’t be correct; the purpose of the ICC was certainly not to make it impossible for wars to end through negotiated peace processes.

Rodrigo Uprimny is a Professor of Law at Universidad Nacional de Colombia and Executive Director at Dejusticia, a Colombian human rights NGO and think tank.