The ICC has issued only 3 indictments in Libya, and no new ones since 2011 – even amidst growing violence. New approaches are needed to make the Court’s mandate meaningful.

Despite the challenges facing the International Criminal Court (ICC) in recent years, there are frequent calls for new cases to be opened – in Palestine, Mexico, South Sudan, Ukraine, and many others. However, as the Court’s engagement in Libya shows, opening an investigation is no guarantee that those who commit crimes will be pursued with rigour, or that the Court’s work will have much impact on challenging impunity and preventing further violence.

Libya was the first case to be referred to the ICC by a unanimous vote of the UN Security Council. The Court’s Prosecutor was granted an open mandate to investigate any international crimes committed after 15 February 2011. Following initial investigations, three arrest warrants were issued in March 2011 for Muammar Gaddafi, his son Saif al-Islam Gaddafi, and the head of Libya’s intelligence services, Abdullah Sensussi.

The case against Muammar Gaddafi was terminated after he was killed. The case against Abdullah Senussi was dismissed when the Court ruled in favour of the Libyan government’s admissibility challenge and concluded that Libya was able to genuinely carry out national proceedings against him. The only on-going case is that against Saif al-Islam Gaddafi, which as of December 2014 has been referred to the UN Security Council by the Court due to Libya’s continued refusal (or inability) to transfer him to The Hague.

However, crimes against humanity and war crimes continue to occur in Libya, but are not being seriously investigated. Imbued by a sense of revolutionary legitimacy, armed non-state actors have sought to contest violently and direct Libya’s future. These groups hold diverse motivations, and many cooperate to form factions to pursue common goals, but all sides are alleged to be responsible for serious human rights abuses. 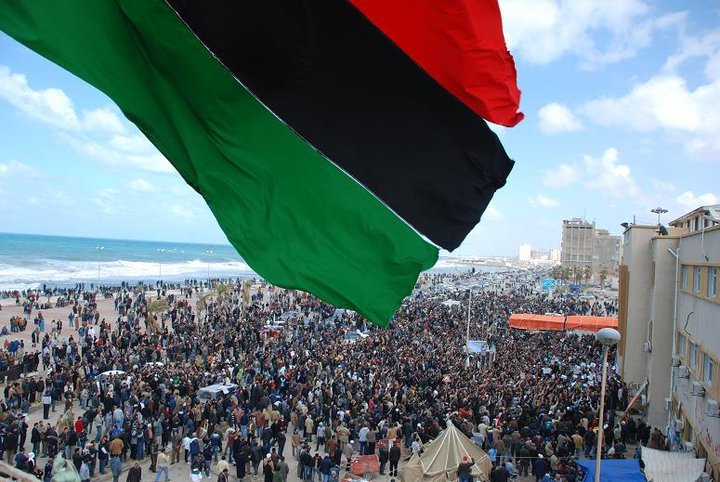 The "Flag of Independence" hangs over a Libyan crowd. Can the ICC play a role in protecting hard-earned freedoms from lawlessness and impunity.

Primarily as a result of fighting between these non-state actors, the Libyan media reported almost 3000 conflict-related deaths in 2014 alone, many of which were civilians. Armed groups have on several occasions attacked hospitals, protestors, and residential areas. Over 390,000 people have become internally displaced since the escalation of violence.

Various armed brigades have declared allegiance to regional, radical Islamic factions. The Islamic State has taken over cities, carried out suicide bombings, beheadings, and attacks upon civilian targets such as hotels in Libya. Those who are critical of the various militias have frequently been subjected to threats, abduction, and torture and targeted killings. On one day in November 2014, dubbed ‘Bloody Friday’, at least 10 individuals were assassinated within 24 hours, including 18-year-old activist, Tawfiq Bensaud. As a result many human rights activists, journalists, lawyers and members of the judiciary have been forced to flee Libya. The judiciary has suspended its activities, deeming the environment too hostile. There has not been a single successful prosecution brought against any individual or group for these attacks and those responsible largely enjoy impunity.

Despite these on-going crimes, no new arrest warrants have been instigated by the ICC or are likely to be issued in the near future; even though Libya’s state bodies are unable to try and convict those responsible.

Moreover, there are many people imprisoned without due process. Official Ministry of Justice figures from March 2014 state that 6,200 detainees are currently held in prisons controlled by the state, of which only 10% have been convicted of any crime. An estimated 4000 additional prisoners are currently detained in makeshift detention facilities controlled by the armed groups.  DIGNITY (the Danish Institute Against Torture) found that, of those arrested, over half experienced some form of torture or humiliating treatment.

Yet despite these on-going crimes, no new arrest warrants have been instigated by the ICC or are likely to be issued in the near future; even though Libya’s state bodies are unable to try and convict those responsible, and the Court has a continuing mandate in Libya,

The ICC Prosecutor has acknowledged that “[t]here are, indeed, indications that crimes that fall within the jurisdiction of the International Criminal Court are being committed” in Libya, and that her Office "will not hesitate to investigate and prosecute those who commit crimes under the Court’s jurisdiction in Libya irrespective of their official status or affiliation”. However, she has also pointed out that “the combined effect of instability and lack of resources” has effectively hamstrung her ability to proceed with investigations.

The ICC’s response has been to provide substantially less funding for the investigations. Over the past two years Libya has received less financial support than any other country situation the Court is investigating. In the latest budget, approved in December 2014, only €603,000 is allocated for investigations in Libya; on an anticipated per case basis, it is the smallest allocation ever made by the court. Furthermore, the Court asserted “no travel is expected” for its personnel to Libya in 2015.

This approach of reducing financial support when an investigation is already underfunded is clearly paradoxical. A similar contradiction is the ICC’s reluctance to send personnel to the locations where grave international crimes are being committed because it is too dangerous. These responses to difficult situations have arisen in many of the Court’s cases and expose recurring dilemmas with its approach to implementing its mandate.

There is certainly both a political and financial cost to opening new cases. In the face of recent failures and challenges to its efficacy, the ICC simply cannot afford to launch another case that does not come to fruition. The Court’s hesitancy is understandable, perhaps. But it begs the question - what is the value of the Court acknowledging the likely commission of international crimes and doing so little to investigate them?  Does that hesitancy not undermine its very raison d'être?

Frustratingly, there has been no attempt to pursue alternative approaches. For example, the ICC might hold its trials in Libya. Doing so would increase the likelihood of the Court being able to actually proceed to trial in the Saif al-Islam case, and lower the political and financial costs currently associated with admissibility challenges. It might also make it easier to work in tandem with national reconciliation efforts.  And it might open up vital space for the Prosecutor to carry out additional investigations into on-going crimes.

There may be an opening for such an approach. Libya failed to convince the ICC it could fairly try Saif al-Islam, and its continued refusal to hand him over may result in repercussions by the Security Council. A new option presented to national actors would present a compromise that would enable them to save face whilst maintaining the desire to deliver justice locally. Any post-revolutionary optimism as to the state’s judicial capacity in this transitional period has substantially waned. What remains are a set of authorities ostensibly willing but unable to act and a public desperate for an end to on-going impunity. The Court needs a different approach to fulfil its mandate to prosecute international crimes in Libya, and in doing so help bring peace and security to the country.

Thomas Ebbs is the London Programmes Coordinator of Lawyers for Justice in Libya.

Elham Saudi is the Director of Lawyers for Justice in Libya.