Indigenous peoples are the original environmentalists. It is time we start treating them that way

Indigenous peoples’ knowledge and their history of conservation efforts could set the standard for sustainable development, but these groups constantly face threats of displacement and even death. 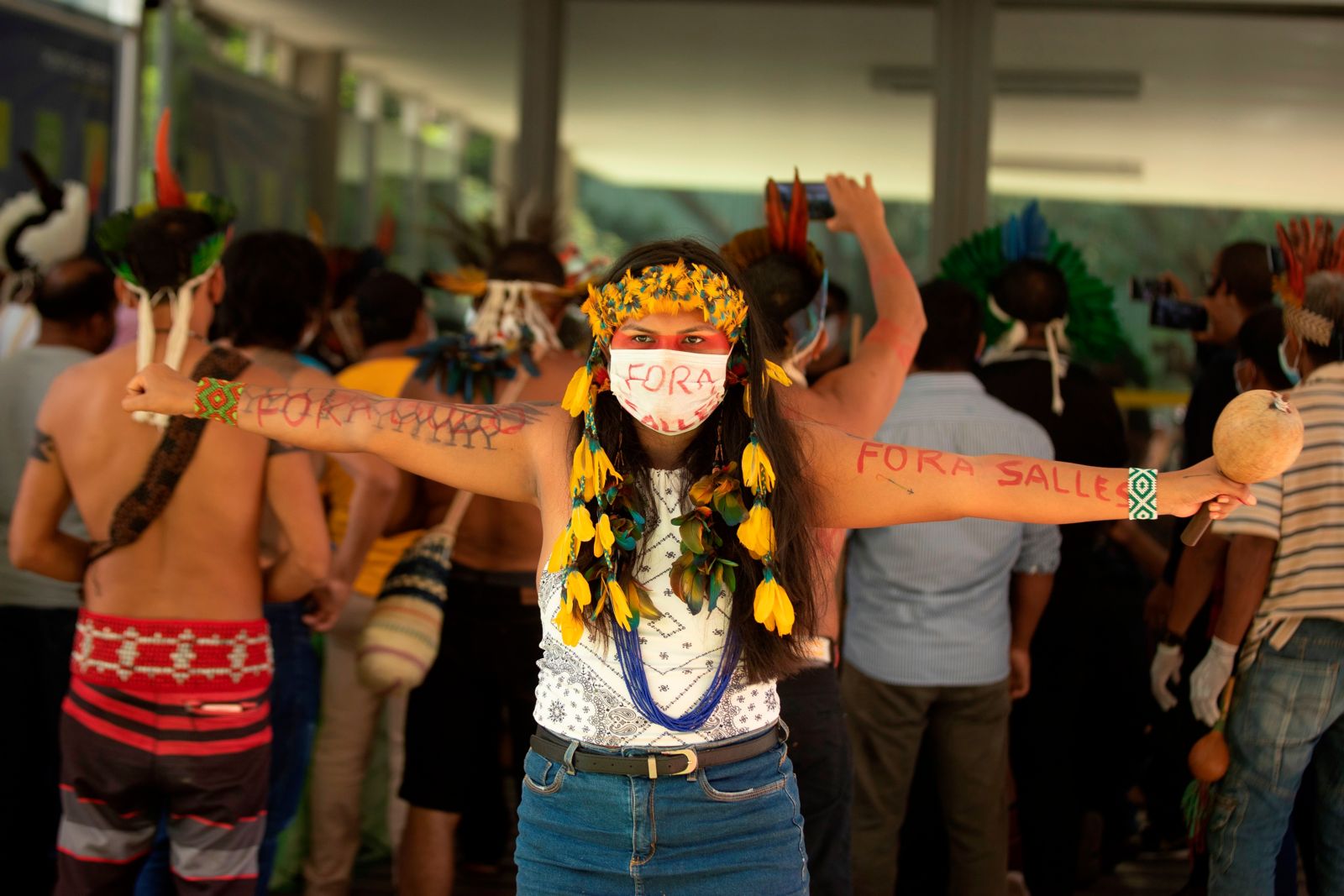 Indigenous people of various ethnic groups protested in April 2021, calling for the demarcation of their lands and the departure of the Minister of the Environment, Ricardo Salles, in Brasilia (Brazil). The members of the indigenous peoples completed two days of protests, demanding protection of their rights. EFE/ Joédson Alves

Indigenous peoples need protection and a voice in climate decisions, both at the regional and international scale. Currently, Indigenous peoples are present at the United Nations’s negotiations for their Climate Change Framework, but only as non-voting observers. Furthermore, the UN’s famed Sustainable Development Goals (SDGs) which establish 17 targets to reach for a sustainable future, do not explicitly include Indigenous knowledge and protection. Despite this, Indigenous peoples demonstrated their role as key players in achieving SDGs 13 (climate action), 14 (marine conservation and biodiversity), and 15 (reversing man-made deforestation).

In the past 20 years, Indigenous communities around the world have won the land rights to more than 900 million acres. However, these battles are hard-fought and just as often are lost.

Indigenous peoples’ knowledge and worldview is an invaluable asset in the fight against climate change. Especially in South America, where it is extremely dangerous to be an environmental activist, Indigenous leaders often play a fundamental role as stewards. They are both visible activists and skilled at managing ecosystems. In the Amazon, which is arguably the most important region for conservation in the face of climate change, it was found that indigenous-managed lands experienced the lowest rates of deforestation.

Contrary to popular belief, Indigenous peoples did indeed have a noticeable impact on the regions they inhabited. Archaeological evidence indicates that before colonial contact, the Indigenous peoples of the Amazon modified and domesticated landscapes. In spite of their high impact, their communities were long-lasting and contributed to the biodiversity of the landscapes. The rich biodiversity of the Amazon is often credited to the indigenous philosophy of living in harmony with all living beings, and that humans are not superior to nature, but a part of it.

This indigenous worldview bears striking similarities to the principles of rights-based development, which emphasize “universality, equality, participation and accountability.” Their worldview is founded on the idea that everything is interrelated, and any current impact their presence has on the land should be sustainable for up to seven generations into the future. So it comes as no surprise that although Indigenous peoples make up less than 5% of the world’s population, they are responsible for the conservation of more than a quarter of the world’s land.

All over the world, Indigenous peoples are being displaced from their ancestral lands for development projects. In late 2020,, the Trump administration took a final swing at selling oil permits for land on the National Arctic Wildlife Refuge—one of few remaining regions where land is still managed sustainably by Indigenous groups. In Arizona, Indigenous peoples who have lived near the Grand Canyon for six generations are facing eviction for a hydroelectric dam project. Worse still, environmental defenders, including indigenous leaders, are being killed in alarming numbers. Berta Cárceres was a Honduran activist and Indigenous leader killed in 2016. Mexican Indigenous leader and vocal opponent of illegal logging Isidro Baldenegro López was killed in 2017. In 2017 alone, 201 environmental defenders were killed worldwide, and those are only the reported cases. Each year seems to be surpassing the last—in 2019, 212 people were killed, and Indigenous leaders faced “a disproportionate” amount of the violence.

The systematic displacement and attacks against Indigenous land defenders is a human rights crisis both for Indigenous groups and the world as a whole.

In Brazil the situation has only worsened since Jair Bolsonaro took office and began speaking out and actively passing bills against Brazil’s Indigenous populations, igniting violence and further emboldening land-grabbers. Bolsonaro has outright refused to pass any legislation that would create new protected areas in the Amazon. Brazilian farmers attacked a group of Gamela Indigenous peoples, leaving 22 of them with severe injuries. Indigenous leaders have spoken out against this “culture of impunity,” where environmental defenders can seemingly be killed without consequences. The primary industries involved in these attacks are mining and oil, but state actors and companies have also used threats of death and even hired contract killers.

The systematic displacement and attacks against Indigenous land defenders is a human rights crisis both for Indigenous groups and the world as a whole. The practice of destroying the environment at any cost, even the cost of human life, for short term gain, will run the world out of resources and leave future generations inheriting a nearly uninhabitable planet.

However, there has been progress around the world in the inclusion of  Indigenous communities in conservation efforts.  In 2018, the Canadian government announced its first indigenous protected area; New Zealand is frequently lauded as the standard for indigenous integration into decision-making, especially with regards to climate change; and the United Nations created a Permanent Forum on Indigenous Issues (UNPFII). Further, Indigenous peoples are resourceful and have won their own conservation battles. Most recently, the Mi’kmaq in Canada purchased the Clearwater fishery and the rights to a lucrative portion of the Atlantic ocean, where they plan to establish a moderate livelihood fishery that would have otherwise gone to commercial fishing operations.

Indigenous peoples have accomplished incredible conservation feats on their own, but what could be accomplished if they had international support and legitimate inclusion in decisions regarding the environment? More than that, we need to include Indigenous thinkers and cement their ideologies into our decision-making institutions.

Brianna Chadourne recently graduated with a Bachelor’s degree in Public Affairs and Policy Management and is currently residing in Victoria, BC. She hopes to pursue a research-based master’s degree in the field of sustainable development policy.