Inequality is not only a threat to economic and social rights—it threatens the realization of all forms of rights everywhere.

At the global level, economic crises, armed conflict, public health emergencies, food insecurity and climate change have all threatened the realization of human rights. Within this constellation of factors, the alarming intensification of inequality in income and wealth has emerged as another area of growing concern. The human rights framework offers partial guidance on the implications of our increasingly polarized societies, but gaps remain. Given the sharp rise in inequality in recent decades, it is critical to more fully understand the connections between the realization of human rights and inequality—how we think about and measure inequality, the degree to which growing inequality threatens basic rights, and what the human rights framework says, and does not say, about inequality.

People experience inequalities across a number of dimensions, for example in educational attainment, health and in the distribution of power. The free time men and women have is unequally distributed, once demands for both paid and unpaid work are taken into account. Inequalities are also measured between individuals, between households, between social groups (e.g., race, gender, and ethnicity) and between countries.

The distinction between horizontal and vertical inequality is particularly salient within the human rights framework, since issues of horizontal inequality are more strongly incorportated. Consider, for example, the human rights principles of non-discrimination and equality, which states that the realization of rights should not differ across individuals based on gender, race, ethnicity, nationality or similar social groupings.

People should have equal opportunity to claim their rights and human rights principles apply to all persons equally. Yet because the implications for vertical inequality are less clear, this does not necessarily imply a perfectly equal distribution of income and wealth. Clarifications by human rights treaty bodies have stressed that non-discrimination and equality refers to substantive equality—there will always be some structural sources of inequality and indirect forms of discrimination. Therefore, equality has to be understood in relation to outcomes and results in addition to opportunities and conduct. If we focus on equality of outcomes, different treatment towards different people or groups might be required. 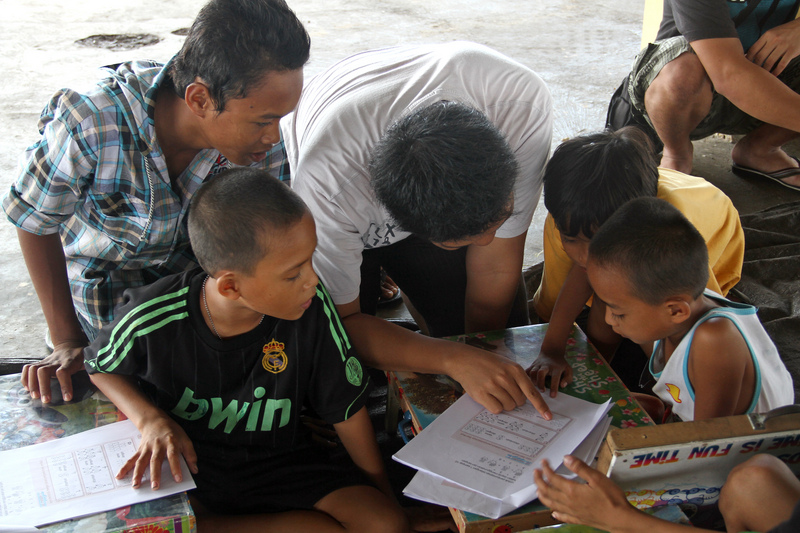 Volunteers provide free education in Indonesia. Evidence shows that income inequality often is associated with poorer outcomes with regard to health, education and other economic and social rights.

Evidence shows that income inequality often is associated with poorer outcomes with regard to health, education and other economic and social rights. It is not surprising that richer households enjoy better outcomes than poorer ones. However, inequality itself can lead to worse outcomes regardless of income level. For example, low-income households in a very unequal society may do worse than households with the identical income in a more equal society.

In the human rights framework, the state has the primary obligation to respect, protect and fulfill rights, but this depends on a functioning state with full democratic participation and transparency. Yet, inequality in income and wealth affects formal and informal political processes in ways that determine people’s access to education, healthcare, jobs and social security.

When the political power of the elites expands as the income and wealth distribution becomes more polarized, this compromises the entire range of human rights.

When the political power of the elites expands as the income and wealth distribution becomes more polarized, this compromises the entire range of human rights. Some political scientists argue that a democratic process is able to offset the impact of inequalities in income and wealth. For instance, the “median voter theorem” suggests there will be pressures for redistribution in unequal societies as long as a well-functioning democracy exists. This is because the majority of the population—those in the middle of the income distribution and below—will vote for redistribution when income and wealth is concentrated in relatively few hands. But this approach makes very strong assumptions: that people are able to claim their rights, that the state is democratically accountable, that the policies supported by the majority do not undermine the rights of other groups, that global integration places no limits on the policy choices of national governments, and that elite economic interests are not able to unduly influence economic policy.

In reality, inequalities in income and wealth produce inequalities in the distribution of power. When the political power of the elites expands as the income and wealth distribution becomes more polarized, this compromises the entire range of human rights. Studies that look at variations across a range of countries have shown that, contrary to the median voter theorem, greater inequality is associated with less redistributive government spending, as measured by expenditures on social security and welfare as a share of GDP. Similarly, there is evidence that social expenditures fall when the gap between the middle class and the top 10% widens. Economic elites are likely to resist progressive forms of taxation, which limits the ability of the government to mobilize resources for the fulfillment of rights.

Human rights provide partial guidance on the implications of widening inequalities on the realization of rights. However, the human rights framework stops short of declaring a particular distribution of income or wealth as fair or just. This is partly because human rights are about realized outcomes that shape the choices and freedoms people enjoy. Therefore, a just distribution of income is one that allows for the fullest realization of rights possible, consistent with the principles of non-discrimination and equality.

Article 28 of the Universal Declaration of Human Rights states that “everyone is entitled to a social and international order in which the rights and freedoms set forth in this Declaration can be fully realized.” The distribution of income and wealth, and the associated political dynamics, represents an important dimension of this social and international order. There is an implicit obligation within the human rights framework for states to consider the impact of inequality on rights and—where necessary—to take steps towards a more just distribution of income.

A longer version of these arguments appear in a PERI working paper and a chapter of a forthcoming book by Balakrishnan, Heintz, and Elson (2016): Rethinking Economics for Social Justice: The Radical Potential of Human Rights. Routledge Press.

James Heintz is the Andrew Glyn Professor of Economics and Associate Director of the Political Economy Research Institute at the University of Massachusetts Amherst.