Civil society organizations (CSOs) worldwide are under significant pressure. Questions abound about whether current trends indicate a permanent setback for civil society, or rather are indicative of shifts in the way that civil society operates. 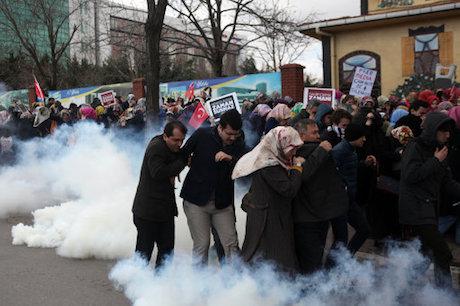 Today’s human rights networks are sophisticated, dense, and multifaceted. Access to the debates shaping these networks’ activities, however, is still restricted by language, money, ideology, and power.

openGlobalRights (oGR) is a multilingual, online forum dedicated to debating human rights work from all perspectives. On it, editors cultivate new and established authors, highlight cutting-edge disagreements, and publish work by advocates, practitioners and scholars worldwide. They take special care to highlight perspectives from the global south, and encourage debate across global cleavages of all kinds.

This week, openGlobalRights introduces a new debate on closing space for civil society in collaboration with the Human Rights Initiative at the Center for Strategic and International Studies.

Civil society organizations (CSOs) worldwide are under significant pressure. According to CIVICUS, a global civil society alliance, in 2014, there were serious threats to civic freedoms in at least 96 countries around the world. Likewise, Freedom House has documented the tenth year in a row of declines in political rights and civil liberties. As restrictions on foreign funding, barriers to registration, intervention in CSOs’ internal affairs, and other forms of harassment have proliferated, donors and civil society have started to develop long-term strategies to build the resilience and sustainability of the sector. Yet, questions abound about whether current trends indicate a permanent setback for civil society or rather are indicative of shifts in the way that civil society operates and is understood.

To explore these questions and more, openGlobalRights launches this new, multilingual debate on closing space for civil society with essays by leading scholars and practitioners.

The debate will examine the evidence and experience of closing space in different contexts and sectors. Further, it will aim to identify the innovative responses that have allowed CSOs to continue their crucial work and thrive in many countries, despite growing pressures. Contributors will consider whether space is really closing or whether the operating environment is merely changing. They will explore strategies that CSOs are employing to counter closing space and how successful these efforts have been. They will also discuss how donors can better support CSOs amidst a rising tide of restrictions.

On Monday, the debate begins with two articles: Araddhya Mehtta, an influencing advisor at Amnesty International, explores how civil society is being innovative in protecting civic space. On the other hand, Cathal Gilbert, a researcher at CIVICUS, takes stock of the deteriorating situation in Turkey and beyond, and calls for the creation of an internationalised social movement to create a powerful counter-narrative and vision of free and equitable societies.

On Tuesday, United Nations Special Rapporteur on the rights to freedom of peaceful assembly and of association, Maina Kiai, explores how the UN and civil society are using innovative legal action to protect fundamental human rights and re-open lost civic spaces.

On Wednesday, scholars Annika Poppe and Jonas Wolff discuss how the restrictions on foreign funding for civil society have strong normative arguments that should not be dismissed lightly. In addition, Orysia Lutsevych, manager of Chatham House’s Ukraine Forum, elaborates on how “partly free” countries in the post-Soviet space cannot take their growing civil society for granted and must reinforce their capacities to increase the competitive advantage of these actors.

On Thursday, Iva Dobichina, Associate Director for Participation with the Open Society Human Rights Initiative, and Poonam Joshi, Director of the European Office with the Fund for Global Human Rights, discuss how silencing activists in the name of security can stifle actors most likely to challenge extremist ideologies and make insecurity worse. Meanwhile, Ezra Mbogori, Executive Director of Akiba Uhaki Foundation, discusses how civil society’s 'one time' reform exercise has turned into a long-term battle for civic space in Kenya.

We close the week on Friday with an article by scholars Kendra Dupuy, James Ron and Aseem Prakash, who share research findings on how foreign funding to civil society elevates the risk of a government crackdown.

In the weeks and months to follow, openGlobalRights will expand the debate with contributions from activists, scholars, and others worldwide.