A longer version of this article was first published in Sur Journal’s 22nd issue here, produced by Conectas.

It is almost passé these days, as depressing as that sounds, to declare that civic space is shrinking across the globe. It is certainly true that in the last decade we have seen an unprecedented wave of repressive laws and practices sweep across the world, all designed to prevent people from organising, speaking out and engaging in democratic rights and duties. But we are well past talking of “shrinking” in the present or future tenses. Data from the International Centre for Not-for-Profit Law (ICNL) indicate that between 2004-2010, more than fifty countries considered or adopted restrictive measures for civil society. In many places, the deed has been done. There’s not that much space left to take.

Even more depressing, perhaps, is the fact that many of our traditional tools for combatting this trend are no longer working quite as well. Reporting, documenting, public pressure, guidelines, recommendations—none of these have been particularly effective in reversing the overall drift towards repression. I feel this currently in my work as UN Special Rapporteur on the rights to freedom of peaceful assembly and of association. My duties include both a monitoring and reporting component—name and shame, if you will—and a technical assistance component, which means working behind the scenes to help states improve their enforcement of human rights norms. It is plain that some governments are not moved by either approach. At this point, real pushback and stepping up of enforcement measures will require more creativity, innovation and a multiplicity of approaches.

A new way forward: litigation in domestic and regional courts

It was against this backdrop of stepping up enforcement efforts that my mandate began a new project in 2014, designed to advance the rights to freedom of peaceful assembly and of association through litigation in domestic and regional courts. The project actively seeks to support cases related to these rights and focuses on providing technical assistance, and advisory services to litigants, attorneys and civil society organisations. An important part of the project is the submission of amicus curiae briefs (e.g., briefs submitted by experts not connected to or solicited by either party) in relevant cases to add critical analysis and an international voice.

The thrust behind this endeavour is simple: get international human rights law and standards into local courts.

The thrust behind this endeavour is simple: get international human rights law and standards into local courts, so that they can filter into domestic law and—perhaps most critically—enjoy better enforcement. The UN system is notoriously impotent when it comes to enforcing the human rights it espouses; it simply does not have the tools, and its Member States are not going to make them available anytime soon. National and regional courts or human rights commissions are often in a better position to do this.

This is not to say litigation in domestic and regional courts is a panacea. It has its inherent shortcomings, such as corruption or a failure to induce real on-the-ground change. But litigation does present unique advantages, such as ensuring concrete remedies: accountability, compensation and some closure. Litigation can also shine a light on repression by forcing the government to address issues head-on in a public setting.

Until this date, my mandate has filed three amici curiae before domestic and regional courts. Besides the mandate’s first amicus brief submitted in a case before the Constitutional Court in Bolivia, described below, in August 2015, an amicus brief was filed in a case before the Supreme Court of Mexico challenging the constitutionality of the “City Mobility Law”, which I argued unduly restricts the right to freedom of peaceful assembly. In November 2015, the mandate also filed a third party intervention—with the Human Rights Centre, University of Ghent (Belgium)—urging the European Court of Human Rights to adopt strong protective standards for the right to freedom of peaceful assembly in four cases against Azerbaijan.

My mandate submitted its first amicus brief in May 2015, before the Constitutional Court of Bolivia in Sucre. The case in question surrounded the constitutionality of the NGO Act: the first provision conditions legal status upon an association’s contribution to economic and social development. The second stipulates that such status can be revoked when associations do not comply with sector policies and/or norms. The law itself dates back to March 2013, when Bolivia adopted the legislation despite many analyses indicating that it contravened international law. It was implemented in June 2013, by the equally contentious Supreme Decree. 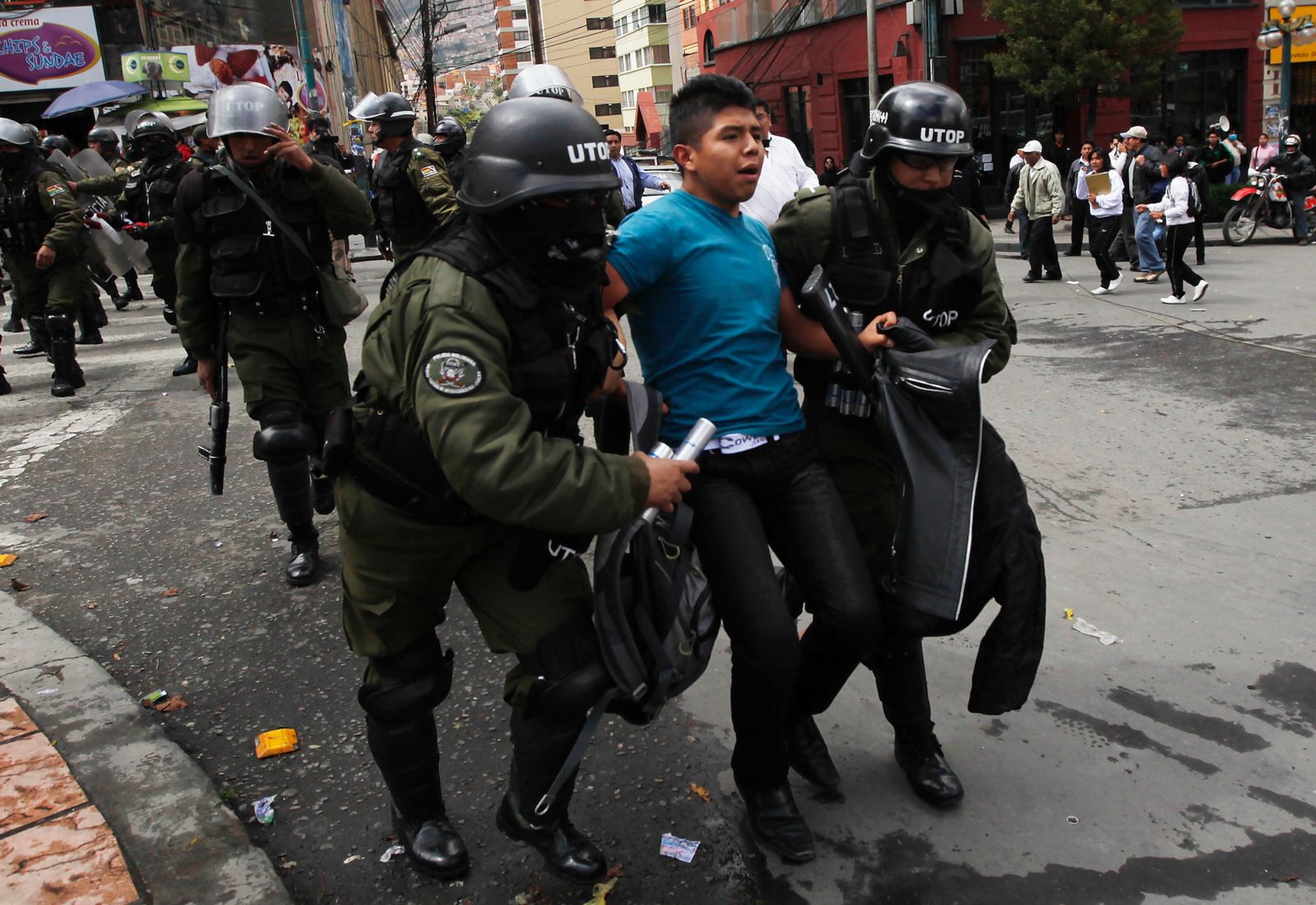 Police officers arrest a protestor in La Paz, Bolivia. The Bolivian NGO act permits sweeping restrictions on the freedom of assembly and generous discretion to law enforcement in its implementation.

The amicus brief argues that the Bolivia provisions unjustifiably restrict the right to freedom of association under international law, standards and principles. The brief notes that restrictions to the right to freedom of association are only permissible under the International Covenant on Civil and Political Rights (ICCPR) when they are (1) prescribed by law; (2) for a legitimate aim; (3) necessary in a democratic society. Any restrictions to the right must be judged against this three-pronged test. Both of the articles challenged in the Bolivia case fail to meet this test.

Even if the restrictions were properly prescribed by law (which they are not), they do not serve a legitimate aim. To the contrary, they could be interpreted as an attack at the very foundation of the right to freedom of association. In addition, the provisions are not necessary or proportional. Their effects—not obtaining (or revoking) legal personality from associations that hold different ideas than the politicians of the day—are simply too sweeping, particularly when you take account of the wide margin of discretion afforded to the authorities enforcing the law.

The Constitutional Court of Bolivia is expected to rule on the case in early 2016. It is of course difficult to predict how the court will rule, but I am concerned by the recent statement by the Bolivian Minister for Decentralisation, who was quoted in news reports as saying that NGOs should observe national laws, regardless of what the UN thinks about them—likely a reference to my mandate’s amicus brief.

The Bolivia case was just the first in what I hope will be a series of judicial interventions by my mandate. Each case is a small step towards reclaiming civic space, but the biggest impact will come when we reach a critical mass of interventions. Finding appropriate cases, though, depends on our networks and partnerships—the people on the ground. Special Rapporteur mandates are vast, often covering the entire globe, and resources are limited. We need civil society activists and actors as partners to alert us to cases which might benefit from an intervention, flag the legal challenges they face, re-use international-law based arguments in their domestic jurisdictions, and to let us know the outcome of these cases.

If you have a case that might be relevant to the mandate, please get in touch with us via our website or by contacting our litigation project coordinator. Or if you simply want to inject international law into a current case on assembly or association rights, our previous briefs are all publicly available on our website. We hope that these filings will be viewed as model briefs to be recycled and reused around the world—each of them a catalyst to help enforce and reclaim civic space.

Maina Kiai is the United Nations Special Rapporteur on the rights to freedom of peaceful assembly and of association. He has more than 20 years experience working in civil society and human rights in Kenya, Africa and globally.