The pandemic and decreased recognition of refugees in Ecuador are compounding risks to the already precarious lives of asylum seekers. 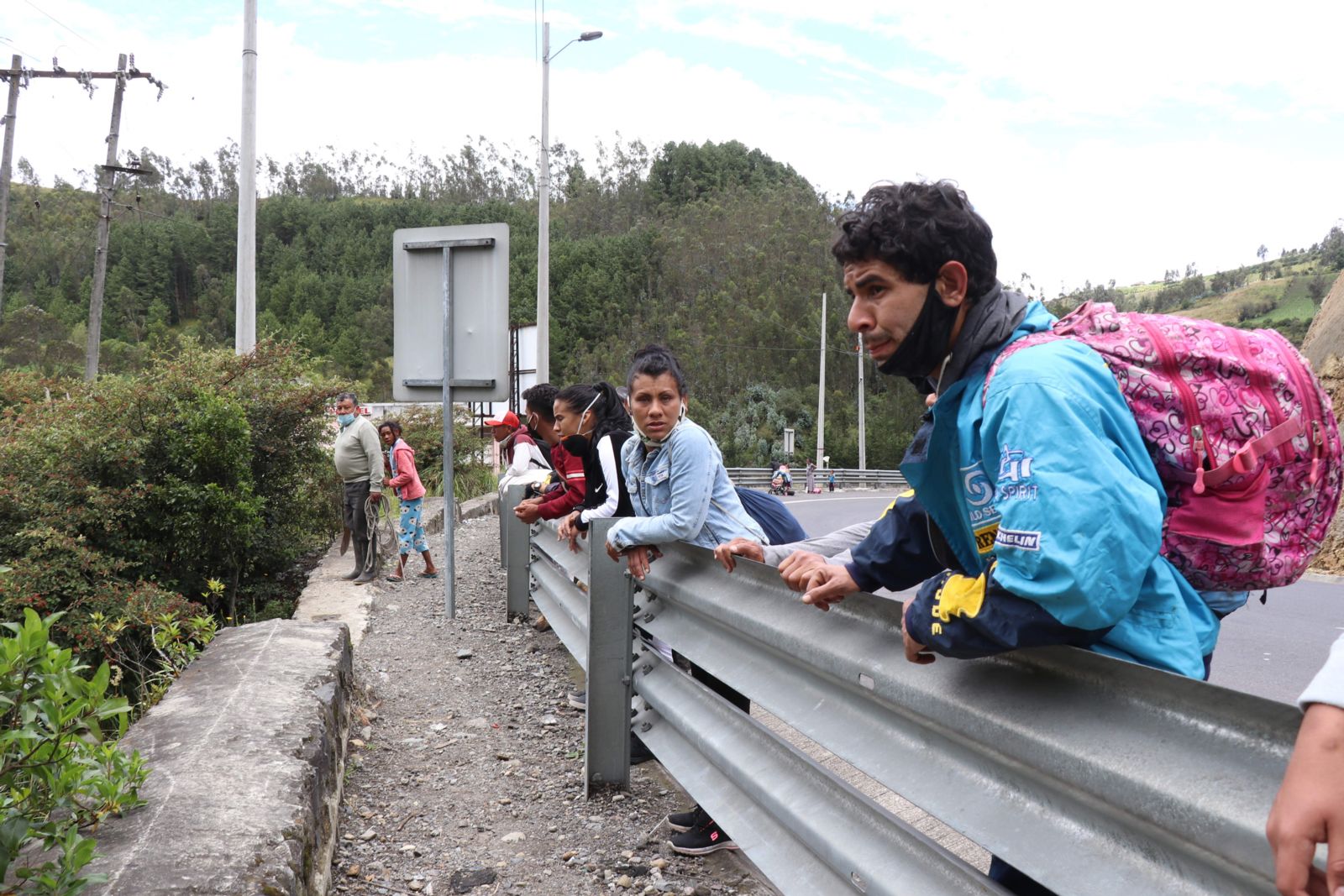 On May 13, 2020 A group of Venezuelan migrants walk along a highway in Rumichaca, Ecuador near the Colombian border. EFE/ Xavier Montalvo

In Ecuador, which has the highest number of recognized refugees in all of Latin America, the current COVID-19 crisis has exacerbated the precarious conditions of migrants and refugees. Compulsory isolation and the limitations for work and obtaining food, among other restrictions, have motivated the departure of 55,888 migrants from Ecuador between March and May of this year. Today, hundreds of foreigners are stuck on the northern and southern borders of the country, often with no shelter or proper protective measures, and at the mercy of possible agreements between the Foreign Ministries of Ecuador, Colombia, and Venezuela.

This untenable situation has led to outbreaks of border violence in response to "maintaining restrictions during the emergency." To date, there have been no official pronouncements or any stated intention to facilitate the return of people through flights or humanitarian corridors of any of the aforementioned governments, which has left many refugees opting for illegal means of travel, putting their lives at even greater risk.

Ecuador currently hosts an official 69,524 recognized refugees from more than 70 countries. The country is the fourth host community for Venezuelan people and also the main host community for Colombian people. Migratory flows—far from being a window of opportunity—have become a major problem leading to the precariousness of the lives of migrants and refugees.

Ecuador has developed a progressive reputation for its legal protections over the last two decades, but that reputation has been tested lately, due to the dramatic decline in the recognition of refugees compared to the number of asylum or refuge applications. In addition, the situation of refugees was made worse by pronouncements of official government spokesmen, such as President Lenin Moreno or the national media, , which have associated migrants with the increases in crime and illegal associations. There is even a general societal perception of migrants as the driver of high unemployment rates.

With a population of 17,510,643 inhabitants according to the latest national census, Ecuadorian health and education services have been saturated, preventing both nationals and foreigners from receiving timely attention. The country is also mired in an economic crisis that has led to political measures that reduce the public budget of these sectors, as well as an increase in unemployment and underemployment rates. By the end of 2019 the unemployment rate was 3.8%, but 17.8% of those employed earn less than the minimum wage and/or do not work full time.

To date, there have been no official pronouncements or any stated intention to facilitate the return of people through flights or humanitarian corridors of any of the aforementioned governments, which has left many refugees opting for illegal means of travel, putting their lives at even greater risk.

The situation for Venezuelan and Colombian refugees and migrants is even more complex. These refugees come from complicated and vulnerable environments, where they have no option to return to their countries. And their work is even more precarious: 87.8% of foreigners work in the informal sector, and despite the fact that the country strives to provide the foreigners the same rights as nationals (protected by the 2008 Constitution), social discrimination creates social barriers to finding work, housing, enrolling their children in educational units or accessing adequate treatment in public institutions.

However, a recent study by the Center for International Relations of the Institute of Higher National Studies (IAEN) focused on the labor situation and economic contribution of migrants in the city of Quito, and found that 60% of foreigners range from 20 and 39 years old and 80% receive a minimum salary between USD 300 and USD 400 per month. But this “employment” includes situations of labor exploitation, abuse of power, discrimination, or in the case of women, sexual favors to obtain employment. Despite the fact that 87.5% of what migrants receive contributes to local economies, local integration continues to be a constant challenge due to the conception of foreigners as threats and not as agents of development.

More than 15% of migrants in Ecuador are in irregular situations without the possibility of getting a stable and secure job, and about 6,300 establishments have been penalized for having foreigners working outside the law, without social security benefits or the payment of a basic salary due to their immigration status. Currently, there are few solutions in Ecuador that extend protections beyond immigration regularization programs.

The response from the state not only invites the criminalization of migration, but it also exposes migrants to the problems that the state is trying fiercely to solve.

The government has affirmed that the decreased recognition of refugees corresponds to the signing of the Peace Agreement in 2016 between the Colombian government and the Colombian Revolutionary Armed Forces (FARC). In addition, migrants have recently opted for other types of legal protections, such as temporary/permanent residence visas through Unasur and Mercosur. Some analysts have asserted that the decision to decrease refugee recognition is due to the amendment of the Law of Human Mobility. While not yet official, the reform is aimed at combating trafficking in persons derived from the flexibility of the law approved in 2017. This reform contemplates changes in 88 articles that include the incorporation of terms such as "risky migration" or "undocumented and irregular migration", in addition to vague concepts such as "not being considered a threat or risk to the internal security of the country", which will be the basis for denying or accepting the visa or residence permit. Finally the government has proposed changes in deportation procedures that "will allow the expulsion and deportation of foreigners who come to the country to commit crimes or who are found committing crimes."

However, restrictions on refugees largely seem aimed at containing the increase in crime and violence rates on the country's northern border, or at exogenous events such as the kidnapping and murder of three Ecuadorian reporters, the kidnapping of an Ecuadorian couple by a FARC dissident in 2018, or the femicide committed by a Venezuelan against his pregnant girlfriend and the murder of a lawyer by a Venezuelan couple in 2019, among the most outstanding.

The response from the state not only invites the criminalization of migration, but it also exposes migrants to the problems that the state is trying fiercely to solve. It is important that public officials modify their perception of foreigners in their speeches and in decision-making so they can provide rights-based solutions that promote the local integration of these groups of people, allowing for the creation of effective mechanisms and durable solutions to migration.

Despite the conditions in which the pandemic leaves countries like Ecuador, it is the responsibility of the state and of more agents of change to make proposals that go hand in hand with human, economic and social development, in order to “contribute to the implementation of the Global Compact for Safe, Orderly and Regular Migration (GCM), in accordance with the objectives of the sustainable development of the United Nations 2030”, as was proposed during the 2019 Global Forum on Migration and Development, held in Quito.

Above all, while migration is not the main problem in Latin America, like the pandemic it highlights the poverty, the state's absence and vices, and the great socioeconomic gaps that are already pervasive throughout the region. Latin American migrants and refugees not only face the hard path of starting a new life in a foreign country, but they also may not have opportunities to improve their quality of life. Worse still, their only options may be nomadism or returning to their country of origin, involving even more risks than when they left.

Diana Herrera is an internationalist and focuses on research on human rights and policies in Latin America. She is based in Quito, Ecuador.