Using the first-ever data-driven effort to track global human rights funding, representatives from two major global funding networks based in the U.S. and Mexico respond to James Ron on the current trends and opportunities of grants for human rights initiatives around the world.

Ron: What did your research discover?

We found that in 2010, 703 foundations based in 29 countries gave $1.2 billion dollars to support human rights. These foundations made over 12,000 grants to 6,800 organizations worldwide.

The percentage devoted to human rights work in North America may seem surprisingly high. We found that several large, U.S.-based foundations supported efforts met our definition of “human rights,” even though those grantmakers don’t self-identify as supporting human rights. One example is the W.K. Kellogg Foundation’s focus on “diversity, inclusion, and equity,” and its promotion of access to education and healthcare for U.S. children in poverty. This study’s definition held that, “Human rights funding … seeks systemic change in the implementation of rights … for individuals, communities, institutions, and movements.” We hope to encourage rights funders and NGOs to engage with these ‘less-likely allies,’ building a broader constituency of support for human rights.

Ron: Who received the funds?

Ron: What issues do these human rights grants support? 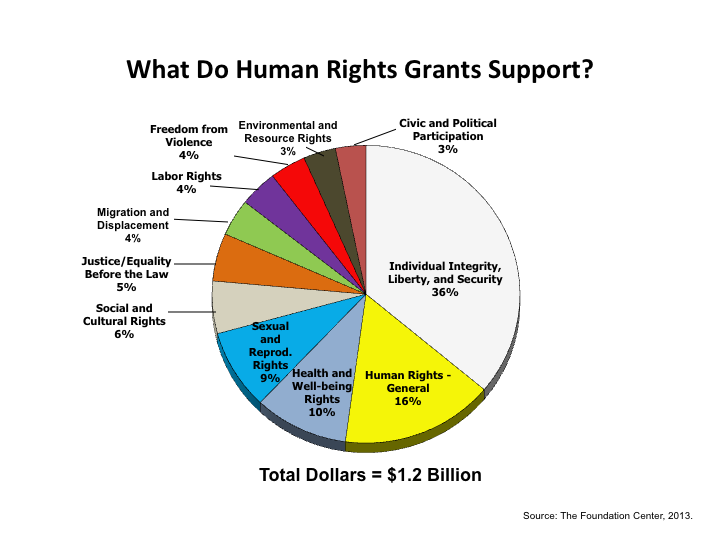 Two notes: In our study, Individual Integrity, Liberty, and Security includes the right to equality, which are any grants made in support of a particular population (e.g. “LGBT rights”) that did not specify the particular right(s) supported. Human Rights – General includes grants whose descriptions were intentionally vague to protect grantee safety, as well as core support grants to organizations that work on many rights issues.

A clear downside to relying on foreign funding is the harm to local movements and organizations if that funding is lost, particularly those working on more ‘controversial’ issues, such as sexual and reproductive rights and land rights. Joint fundraising initiatives, which involve two or more funds mobilizing resources together for a specific issue, are one innovative development to counter the lack of available funding.

Ron: Can you reflect more on the gap between the US and EU, and the rest of the world? What do you think contributes to this gap?

The funders we spoke with attributed the historical gap in the origin of funding to several factors, including: lower levels of per capita GDP, weak local cultures of philanthropy that prioritize charity-oriented giving rather than giving aimed at systemic change, and differing understandings of human rights, in which some may shy away from supporting rights work because it is seen as “too political.”

Growing economies in Latin America, Africa and Asia are resulting in both great inequality and a burgeoning middle class. It is precisely among the middle class that feminist philanthropy can thrive. Moving away from a culture that sees women and girls as secondary citizens whose rights are negotiable or `too expensive’ requires awareness-raising and financial commitment. A number of funders based in the north remain skeptical of southern organizations’ ability to overcome the funding gap, and yet there is little support provided for the creation of endowments or fundraising capacity-building, critical components to sustainability.

Ron: What other sources of funding are there for human rights in the Global South? How are they similar from, and different from, those in the US or western Europe?

Ron: Do human rights donors in the global north think about boosting giving to human rights in the south? Do they give money to build that capacity?

Ron: Should northern governments, the U.N. and other multi-lateral agencies spend more - or less - money on southern human rights groups? Are there problematic conditions attached to human rights funding from these northern sources?

One area of significant concern is increased domestic restrictions on the receipt of foreign funding, such as those passed in Russia and India. What will this mean for local philanthropy? If these laws make it too difficult for some northern-based groups to fund in some southern-contexts, will local philanthropy grow to fill the gap? Or will these policies and increasingly closed space for civil society result in reluctance among local funders to engage with human rights? This remains to be seen.

Some bilateral and multilateral agencies, including the Dutch government and UN WOMEN have created specific funds to support women’s rights organizations. However, the intersections and potential contradictions between women’s funds’ agendas and the interests of bilateral and multilateral donors may spark some tensions. While there is a need for additional funding for grassroots women’s rights organizations worldwide, there is also a need for more quality funding: funding that is flexible, multi-year, and supports core activities.

Emilienne de León is the Executive Director of the International Network of Women's Funds (INWF).