How can human rights push back against regressive global trends in trans rights and sexual and reproductive rights? 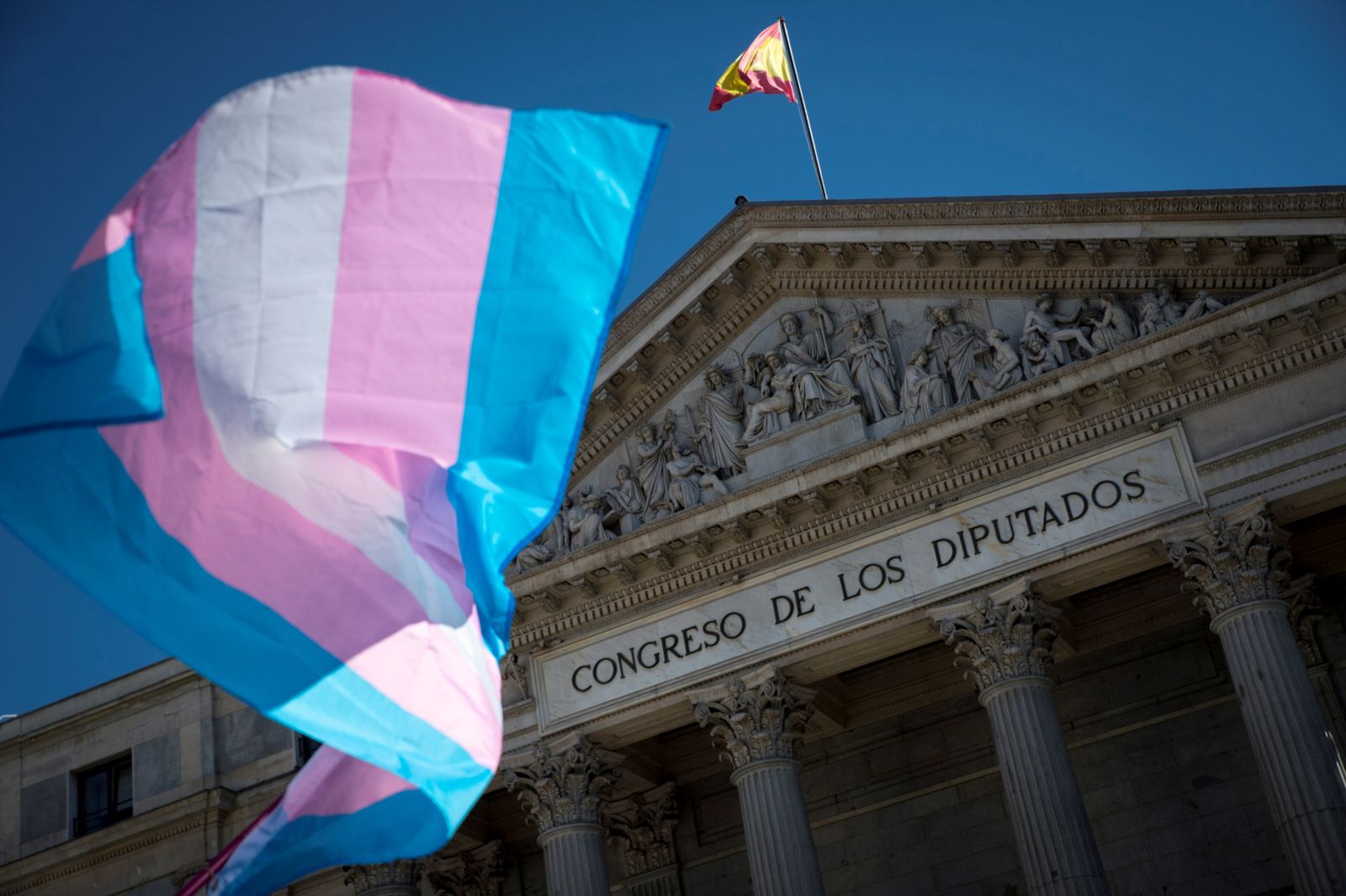 A flag flies before the Congress of Deputies while political collectives of trans people from all over Spain demonstrated in the center of Madrid, to show their discomfort over the internal document of the PSOE, where they were against compliance of its programmatic agreement regarding the Trans Law. EFE / Luca Piergiovanni

Human rights represent a complex interplay between discourse and law that must be named and explicated. As a transgender woman who studies transgender health and human rights, I have learned that the unique rights claims made by trans people elucidate this interplay and push us to consider the importance of geographic context. I argue that looking to how trans rights are articulated reveals that human rights can, at their best, work to unite seemingly disparate social movements in markedly different geographic contexts. At the same time, the realization of some human rights for transgender people can obfuscate ongoing rights violations and restrictions impacting both trans and non-trans people.

Even further, the use of “transgender” as an umbrella term meant to capture all gender-nonconforming people and identities flattens the complexity of Indigenous genders beyond the male/female binary and assumes that everyone’s needs are the same. I turn to some examples of how trans rights as human rights have emerged in different geographic contexts to demonstrate these points and imagine how human rights both within and beyond the letter of the law can, moving forward, work to push back against regressive global trends in sexual and reproductive rights.

There are no one-size-fits-all solutions to the pressing issues facing trans communities in their vastly different socio-legal and geographic contexts.

The phrase “trans rights are human rights” has become a common adage. While it’s difficult to trace the circulation of this phrase, human rights were the core organizing principle behind the Stop Trans Pathologization Now movement, notable for successfully pushing for revisions to the International Classification of Diseases. As a slogan, “trans rights are human rights” has been a rallying cry in denouncing Japan’s decision to continue to require sterlization in order to legally change one’s gender, in decrying Freddy McConnell’s failed appeal to the United Kingdom’s higher court to be named as “father” on his child’s birth certificate, and most recently by Amnesty International in their campaign to “#Drop33.”

However, when we examine trans rights as human rights more deeply, it becomes clear that it does not mean the same thing everywhere.

In the US, where I live and work, trans rights claims have emerged, or perhaps reemerged, in response to the now infamous House Bill 2, dubbed ”the bathroom bill,” passed by my home state of North Carolina. Since the US has not ratified the most relevant international treaty, the refrain of trans rights as human rights articulates the universal humanity of transgender people, rather than calling on a specific set of legal claims which the US does not obligate itself to uphold.

What can human rights do for trans people in a nation that devalues human rights in general? While international human rights law may not set the legal basis for trans rights, rallying behind the phrase “trans rights are human rights” meaningfully puts the US in conversation with other struggles around the globe. Thus, even when rights are restricted or left unrealized, their cultural weight can, at times, be put to good use beyond the rule of law.

In contrast to the US, Argentina is a pioneer in the arena of transgender rights. Its 2012 Gender Identity Law was the first federal law to codify vital gender-transition related healthcare for trans people as well as options for legal gender and name changes. Even further, it was the first law to put the Yogyakarta principles into effect thereby codifying transgender rights as human rights. In this respect, Argentina is indeed ahead of the curve. However, induced abortion remains a criminal offense.

While Argentina has a demonstrated a commitment to transgender rights in particular and human rights more generally, it is crucial to note that the Gender Identity Law may have played a role in reducing trans rights to transition-related healthcare and legal gender recognition at the expense of the realization of other sexual and reproductive rights. Trans people’s reproductive health and rights are often left entirely out of conversations on both reproductive health rights and transgender health and rights.  Some work has been done to juxtapose the letter of law pertaining to gender identity and the penal code that outlaws abortion, but ultimately abortion continues to be imagined predominantly, if not exclusively as a cisgender women’s issue.

Last year, in 2019, India passed the Transgender Persons (Protection of Rights) Act. The third gender category, which would include hijras who are neither male nor female, was first introduced in the 2011 census. Interestingly, transgender people were legally recognized as a third gender per the judgment in the 2014 case, National Legal Services Authority vs. Union of India. Eight years after that first enumeration, this new law enables Indian citizens to solicit an identity certificate from a local magistrate in order to be legally recognized simply as “transgender.” If a trans person wants to be legally recognized as female or male they must provide proof of having had surgery. This amounts to yet another sterilization requirement, which has been condemned by the Special Rapporteur on torture and other cruel, inhuman or degrading treatment or punishment.

Further, this law conflates third gender and transgender in ways that flatten their mutually irreducible needs. For these reasons and many more, Indian trans and third gender activists have denounced the law.

But it still serves as an important lesson. The enumeration process for the 2011 census, which revealed much, may have led to the articulation of transgender rights in this 2019 bill that is wildly out of step with international human rights law that should have informed it. Further, bills meant to promote the rights of trans and gender-nonconforming people as a protected class should always be informed by those with lived experience who will have to bear the consequences of the law, whether good or bad. Importantly, this chain of events points to the limitations of rights claims, no matter how well-intentioned.

Ultimately, there are no one-size-fits-all solutions to the pressing issues facing trans communities in their vastly different sociolegal and geographic contexts. However, drawing on one another’s collective successes through human rights claims can be a powerful way to push back against efforts to repress and restrict trans people’s rights, whether that means relying on the refrain of “trans rights are human rights” rather than the law in the US, or invoking human rights standards to support passage of  the Gender Identity Law in Argentina.

What becomes necessary as we try to spur each other on is attending to and honoring our differences, as was done by the trans and third gender activists in India. The substance of human rights law and the discursive weight of human rights articulations change dependent on geographic context, but so do the strategies that are necessary to promote them. For trans people who often bear the brunt of these repressive trends, we use whatever tools are most strategically viable to make our lives more livable. And in fighting for ourselves, we make progress toward human rights for all.

Avery is a PhD candidate in the Population, Health, & Place program at the University of Southern California. She is also the founder of the Trans PhD Network and passionate about learning from and alongside other trans activists, advocates, and academics. Follow her on Twitter: @avery_everhart